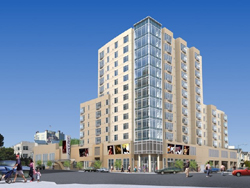 San Francisco’s affordable homeownership program requires that condo developers provide 15% of their units at a below market rate (BMR) to those earning no more than 100% of area median income. While the program gets buyers units for under $300,000 that would otherwise sell for $700,000, two recent reports have exposed a potentially fatal flaw in the program: there is no limit on the condo fees charged to the BMR purchasers. A BMR buyer goes into the deal knowing they will pay $350 to $400 a month in condo fees, but then has no control over how much these fees rise each year. If fees rise beyond what owners can afford, a program designed to boost affordable homeownership could instead be adding to California’s rising foreclosure rate. The city could avoid the risk of rising fees by requiring developers to either build affordable projects off-site, or contribute to a fund for nonprofits to build affordable homes.

Carol Lloyd’s Sunday Chronicle Surreal Estate column has become an indispensable resource, as recently evidenced by her January 21 column on how condo dues increases threatens San Francisco’s affordable homeownership program. Lloyd described how Barbara Hernandez thought she had achieved the American Dream when she purchased a BMR condo for $233,000 at 333 Grant Avenue at the Chinatown gate, only to have it become a nightmare as condo fees rose from $355 to $630 a month and she was assessed $4000 for unforeseen building upkeep.

Hernandez’s situation will not be unique. The San Francisco Examiner’s January 29 story on the availability of twelve BMR condos in the Fillmore notes the $350-400 monthly condo fees on top of mortgage payments and real estate taxes—with no limit on how much these fees can increase.

The fact is that for all the city’s investment in “homeownership counseling” programs, nobody can predict or control a homeowner’s association decision to raise its fees. And as Lloyd and others have pointed out, the often-upscale owners who paid full-price for their homes are likely to be far more supportive of increasing fees to pay for upgrades to the premises than the BMR purchasers living beside them.

Is there any alternative to subjecting BMR buyers to potentially unlimited condo fee hikes?

The city could presumably agree to subsidize condo fee increases above a certain amount. But that would take money from other affordable housing projects to provide a subsidy to a group that has already gotten to buy a BMR home. Further, these owners earn 100% of median income, meaning that they are already at the top of the income scale of those eligible for city housing programs.

Considering that the on-site affordable homeownership program already subsidizes buyers to the tune of as much as over $400,000 per unit, it is hard to see the public clamoring for increased public subsidies to BMR buyers. Considering that the twelve BMR units in the Fillmore have received over 300 applications prior to the February 3 deadline, there are plenty of people interested in buying such units without the city having to sweeten the pot by agreeing to subsidize increases in condo fees.

Because it is the purchasers of condos who set the fees through their homeowner associations, there is nothing the city can extract from the developer during the approval process to protect BMR buyers from skyrocketing fee increases.

There is a better solution, but it has no chance of being implemented. Instead of basing the city’s affordable homeownership program on the sale of BMR units in upscale buildings, require developers to either build affordable units in a separate project off-site or contribute to a fund for a nonprofit to do such.

An all-affordable project runs no risk of excessive condo fees. Even if the sale prices were higher than that of on-site BMR units, purchasers would benefit from the security of knowing their future housing costs will not dramatically escalate.

But the on-site option is not going to disappear for the simple reason that many housing advocates remain convinced that off-site housing contributes to what they describe as the “ghettoization of the poor.” Forget the fact that BMR buyers are not poor, and that neighborhoods near downtown like the Mission, SOMA and lower Potrero Hill hardly qualify as “ghettoes.”

Support for on-site inclusionary housing persists despite unrestricted condo fees, and the fact that all-affordable projects built on a separate site serves those of lower incomes. Whereas off-site affordable developments are designed to serve the needs of middle and working-class families, such groups are ignored in the planning of upscale condo towers, where they comprise at most 15% of the residents.

Rising property values San Francisco reduce the risk of BMR buyers losing their homes to foreclosure due to an inability to pay high condo fees. But with thousands of condos in the pipeline, and a glut of TIC’s, this could soon change.

San Francisco’s chief affordable homeownership program should not be dependent on the vagaries of condo prices. If the Mayor’s Office of Housing that administers the program cannot find a way to prevent rising condo fees, it needs to direct affordable homeowner resources in a more stable direction.