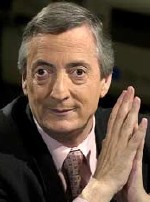 The unexpected death yesterday of key Argentinean political leader and former President Nestor Kirchner marks a sudden end to one of South America’s greatest modern political leaders. After taking office in May 2003, Kirchner aggressively battled business and the military, challenging the powerful corporations that “benefited from inadmissible privileges in the last decade.” He vowed to end an Argentine economic model that favored “financial speculation and political subordination” by economic and political elites, matching fiery words with combative actions against entrenched interests in a way that many once hoped for President Obama. Eschewing “bipartisanship,” Kirchner – like FDR – relished battling the elite, and used populist policies to build a powerful progressive coalition now headed by his wife, Christina, the current President. It’s no surprise that Wall Street saw Kirchner’s death as “bullish news,” and that it sparked a flood of “bullish investment notes.”

Nestor Kirchner is the type of progressive leader that many progressives hoped they were getting when they elected Barack Obama. Kirchner was a fighter, a battler, and a President who not only restored his country’s economy but also had the courage to hold the military accountable for its widespread abuses during its dictatorship from 1976-83.

He was a passionate leader who never hesitated to get in the face of those shouting at him, and his own passion rallied his base. While never popular among his nation’s far left, he was the most progressive President Argentina had seen in decades – if not ever.

Nestor Kirchner and Christina Kirchner showed the importance of fighting for progressive causes, even in the face of opposition easily as ruthless as that found among right-wing interests in the United States. For example, when President Christina Kirchner faced massive resistance from powerful growers to necessary agricultural export tax increases, she refused to cave in and her legislation ultimately failed. Nevertheless, she sent a message to the base that elected her that she would fight for their interests regardless of the political consequences.

The Kirchner’s backed such policies as price controls, export freezes and tax hikes on exports that represented the type of aggressive response to economic decline that the Obama Administration was unable to implement. This decline hit Argentina particularly hard, leading many conservatives to gleefully look forward to defeating “Kircherism” in the 2011 national election.

But the Argentine economy has recently been improving, increasing the prospects for either of the Kirchner’s to win the 2011 election. Many believed that the more popular Nestor would replace Christina as the presidential candidate, a decision we will now never truly know.

While some liked to compare the Kirchner’s to the Clinton’s, the two couples have drastically different political styles and Christina was already a successful politician before marrying Nestor. The greatest similarity is between Nestor and Bill’s early heart problems, which Kirchner sadly failed to overcome at age 60.

We extend our greatest sympathies to the Kirchner family and to the people of Argentina.