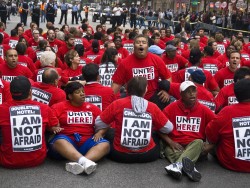 UNITE HERE is launching over 100 actions across North America to demand that Hyatt Hotels, run by former Obama campaign Finance Chair Penny Pritzker, re-hire 100 housekeepers whose jobs were replaced by low-wage workers from an outsourcing agency. The firing of the workers in three Boston hotels became a national issue after it was learned that they had been required to train their replacements, and Massachusetts Governor Deval Patrick has called for a state boycott of the hotels. Although none of the fired workers were UNITE HERE members, the union’s Boston-based Local 26 has been fighting hard for their reinstatement. Now, recalling how Cesar Chavez and the United Farmworkers turned a struggle in California’s Central Valley into a national boycott and campaign for worker justice – detailed in Beyond the Fields – the union is taking the reinstatement fight this week to San Francisco and other cities across North America, beginning with a march and rally in Toronto on November 10.

Last week, the Hyatt Corporation had a public stock offering that brought the Pritzker family – including Penny Pritzker, National Finance Chair of Barack Obama’s presidential campaign and co-chair of the 2009 Presidential Inaugural Committee – nearly one billion dollars. Rather unfortunate timing for the Hyatt Hotel owners, as their windfall comes as they try to convince the public that tough times entitle them to major concessions from workers.

On August 31, 2009, all housekeepers at Hyatt’s three Boston area hotels were fired. They were told to clean out their lockers and leave. Some had worked for the hotels for more than 20 years.

But they weren’t laid off because the Hyatt’s didn’t need housekeeping. Rather, Hyatt brought in a subcontractor that would pay the replacement housekeepers only $8/hour.

Although the workers were non-union, UNITE HERE’s Boston Local 26 immediately rushed to their defense. The Local contrasted Hyatt’s $1.3 billion in profits from 2004-2008 with its firing of its longtime housekeepers, leading to extremely unsympathetic coverage for Hyatt in local and national media.

To stem public criticism, Hyatt then offered the housekeepers jobs with a temp agency. The workers refused, insisting they should get their real jobs back. They also did want to be used as temps to replace other workers, the precise scenario that befell them.

In light of the Hyatt Hotels’ attempt to reduce wages, cut jobs, and increase health care costs for its workers, some might find it alarming that Penny Pritzker serves on President Obama’s Economic Recovery Advisory Board. The Board formulates and evaluates economic policy for the Obama Administration, and Pritzker’s approach seems to directly contradict the President’s goal of creating living wage jobs for the working class.

In fact, it’s clear that Obama’s agenda has not impacted Pritzker’s business practices. To the contrary, the first year of the Obama presidency has seen Hyatt callously fire housekeepers in three Boston hotels, while demanding major concessions from UNITE HERE workers across North America.

In other words, at a time of high unemployment, rising health care costs, and declining living standards for the middle and working class, the global Hyatt Corporation is implementing a strategy designed to make these problems worse.

The media spotlight has been off Hyatt since it offered their former housekeepers temp jobs, but UNITE HERE is about to get the global hotel chain back in the limelight. The union has scheduled 100 “solidarity actions” across North America from November 10 to November 19, which will include events in Toronto, Boston, Los Angeles, San Antonio, San Diego, Vancouver, Indianapolis, Chicago, Philadelphia, Santa Clara and San Francisco.

The vigils come as UNITE HERE is bargaining with Hyatt over a new contract in several cities, so public knowledge of the Pritzker family’s new cost-cutting labor strategy is likely to grow. And there appears to be a synergy between the two struggles, as Hyatt workers in other cities identify with the plight of the fired housekeepers.

Aurolyn Rush is a 13-year telephone operator at the Grand Hyatt of San Francisco, where UNITE HERE Local 2 waged a three-day strike last week. Rush described the Hyatt’s attempt to sharply raise his health care costs as “unforgivable,” and its firing of the Boston housekeepers as “outrageous. We’re not going to stand for it.”

In Chicago, about 6,000 downtown hotel workers affiliated with UNITE HERE Local 1 have worked without a contract since Aug. 31, and on September 24 about 900 demonstrated in support of the Boston housekeepers outside the Park Hyatt Chicago.

Claudette Evans, a Floor Care Attendant at the Hyatt Regency Chicago who participated in the September 24 protest, noted, “What the Hyatt did to those housekeepers in Boston is unthinkable. I will continue to stand up for those ladies, for myself, and my mother –who’s also been a housekeeper at the Hyatt for 14 years – because our health and our jobs
depend on it.”

By building support against the Hyatt across North America, UNITE HERE is elevating a Boston firing of housekeepers to a national social justice struggle. Just as Cesar Chavez realized that farm workers could not defeat growers in a struggle confined to the Central Valley, UNITE HERE recognizes that many potential Hyatt customers do not know of the Boston firings, and that there is a reservoir of anger across the nation yet to be tapped against the hotel chain.

Those interested in sending a message to the Hyatt and other well-off employers that the current economic crisis does not justify cutting workers wages and benefits can show their support by joining a vigil or action. Toronto’s opening event today will be followed by a Veteran’s Day vigil in Boston; San Francisco’s vigil occurs November 19, with time and location soon to be announced.