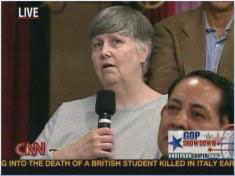 In a great example of how the Republicans are in disarray about their 2008 presidential candidates, consider the following that happened this week. During the November 28th Presidential Debate, CNN had a focus group of 24 undecided Florida Republicans to assess their opinions. After the debate was over, a reporter asked them to raise their hands if the forum had helped them pick a candidate. None of the 24 did — and a few shook their heads — but one participant, Sharon Turner, made an interesting point. “I think if the Democrats have John Edwards,” she said, “I’ll vote for him.” Turner went on to say that she had not made up her mind about who to vote for among the Republican candidates, because none of them have really spoken to her. But apparently, John Edwards has.