U.S. College Students Should Take to Streets Over Debts 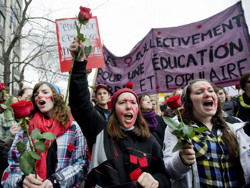 In Quebec, Canada, a student strike protesting $1,778 tuition increase over seven years is in its 108th day. The students have demonstrated in the streets, occupied buildings, boycotted classes, posted barricades and used every available social media tool to promote massive resistance to the proposed fee hike. Yet in the United States, students suffer from much steeper tuition hikes in silence. While there are exceptions – particularly the ongoing protests in California’s public colleges – most U.S. students appear resigned to leaving college $50,000 to more than $100,000 in debt. We see no mass burnings of loan documents, no vows of collective refusals to pay, and no public actions demanding changes in the system. Students have engaged in direct actions for immigrant rights and gay marriage, and should act with similar boldness against an unfair and often duplicitous educational status quo.

On May 12, 2012, the New York Times ran a multi-page story, “A Generation Hobbled by the Soaring Cost of College.” The article was not news in the macro sense, but its individual stories of graduating students owing over $100,000 in college loan debt working two jobs while living at home with parents was enormously powerful.

The story showed how far off course the United States has gotten from the days of the G.I. Bill, or the funding of college through grants rather than loans in the 1960’s. It also showed how far we have come from the days when students risked criminal prosecution for burning draft cards in opposition to the Vietnam War, but now fear burning college loan documents for what it would mean to their future credit ranking.

The Times article led me to ask people (including many students) why they thought U.S. students, unlike their Canadian brethren, were not in open rebellion. After all, they were being effectively forced to go deep in debt simply to get the credential needed for most jobs. The most common answer was that students did not feel they could do anything about it, believing “that’s the way the system is.”

That tells us a lot.

It tells us that the trillions of dollars spent to convince Americans that “government is the problem not the solution” has paid off. Our young people have little faith in government’s ability to end stifling college debt. They believe government can make minor improvements – such as President Obama’s current battle to prevent student loan interest rates from rising – but not transform how education is funded.

It also tells us that American’s historic individualism continues to lead new generations to blame themselves rather than the system for their problems. This may be the biggest ideological distinction between students in the United States and those in Canada, France, Spain and other nations where collective solutions have long taken hold.

Some recent graduates see young people succeeding at Facebook and other high-tech companies and as evidence that opportunities exist if only individuals have the right stuff. And while 50% of new college grads are unemployed, this means that 50% have jobs –this further leaves those drowning in debt believing they have only themselves to blame.

Overall, this is not an era in the United States of sharply declining student activism. For example, students have aggressively challenged “the system” on immigration policy and marriage.

It may be that Latino and gay and lesbian students see themselves as “outsiders,” and are less impacted by the nation’s dominant ideological messages.

DREAM Activists have pushed legal boundaries far beyond anything we have seen among those facing insurmountable personal debt. And gay marriage proponents refused to accept the existing marriage system “as it is.”

Latino students have also played a leading role battling tuition hikes in California’s public colleges. They appear to have a clearer sense that the education game is being rigged against them, and also recognize that a state that amply funded public education when white students were a majority changed course once students of color assumed this role.

If millions of college students and recent grads publicly announced (or used online petitions to declare) a refusal to pay their debts, what would be the political response?

Would President Obama, who needs young people’s votes in November, castigate the group for not fulfilling a written loan contract? No way. He would likely try to co-opt the students’ demands. Would Mitt Romney and Republican leaders offer criticism? Also unlikely, as the last thing Romney needs is to remind voters how his own personal wealth shielded his kids from such college debt.

Would Wells Fargo and other big student lenders go after the protesters’ credit? That’s a terrible image for banks, which have enough public relations problems over foreclosures. Banks could quietly proceed against defaulting grads, but this could prompt mass civil disobedience against banks trying to collect duplicitous and one-sided loans.

It seems that many students still believe that a good job is just around the corner and that the current economic crisis is just temporary. But this ignores that Republicans and the bipartisan 1% are intent on keeping high unemployment precisely to keep students and others in check.

Kris Kristofferson once wrote, “Freedom’s Just Another Word for Nuthin’ Left to Lose.” It’s hard to see what college grads working low-wage jobs to pay off six-figure debt with interest have to gain by remaining silent – while the upside of an uprising against college debt could be huge.