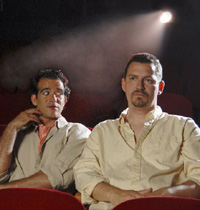 Theater Artaud is a live work loft building with two theaters on the main floor. Artaud was the forerunner of the loft concept in the City. The former factory has great floor to ceiling window panes and the light beaming into the main entrance is like being in Grand Central Station. It really put me in the mood for this production of Sam Shepard’s “True West.”

I have seen the Shepard play many times before, even with Ed Harris before he became a big movie star–but, I have never seen such gripping performances before. Other versions had the two brothers constantly shouting at each other. It seemed forced and over the top. The actors on the Artaud stage give a more subdued rendering. However, make no mistake about it – the anger and the tenseness come across very clearly.

The play, as you probably know is about a love hate relationship between two brothers. One brother is well educated and is a successful writer. The other is a poorly educated guy, who may seem dumb, but is very clever and manipulative. Guys like him – the overly macho types are experts in turning things around and boxing their adversary into a corner. They are street-wise, overly macho and they know how to intimidate. The bottom line is that they are always looking for a quick buck without working too hard for it. You’ve known men like this before. They always sit in chairs with the provocative spreading of the legs. Rick Scarpello who comes onto the stage in loose Jeans, barefooted and a messy tee shirt fits the image perfectly. He’s not stylish, but I’ll tell you one thing he is sadistic and sexy. A bad combination, yet you can’t keep your eyes off of him. It’s a powerful role by an amazing actor.

The other brother (Austin) is a successful writer played by Ronen Sberlo. He delivers a Grade A! – and terrific! performance. His role is very difficult, because it calls for reserve. He has to stay as calm as possible to be ever ready for another explosive confrontation with his brother. Psychology is important here. Humor the brother and maybe he won’t kill you. It was a perfect balancing act and performance…and I was blown away. “True West” is a guaranteed adrenaline boost. The direction by Gabrielle Gomez gets the mood, the time and the place right on target. The entire production has everything. Perfect lighting, perfect sets and perfect acting. ‘True West’ should be seen like this– in a small intimate theater. This is a first time full production of a play by the Panhandler’s Theater Company. I am looking forward to many more.

KISS OF THE SPIDER WOMAN IS ANOTHER MASTERPIECE

I left one Masterpiece to see another a couple of days later at the New Conservatory Theater. The Kiss of the Spider woman by Manuel Puig has been to town a few times before, and it was even a musical and a film. It’s a grim story about prison and banana belt justice in a prison. Although depressing and heartbreaking, the story is also beautiful at the same time. Two men are in a jail in a South American Country. One is Valentin (Brad Cooreman) – who is a political activist. His co-mate is Luis Moline (Javier Galito-Cava) a Gay window dresser. To escape the daily abuse and the reality of where he is, the gay man invents melodramatic romantic movies that he acts out to his jail mate. Sometimes Valentin is intriqued – but becomes somewhat annoyed when he is trying to figure out how to contact his comrades on the outside. But, the closeness of the jail cell eventually brings the straight man and the Gay Man together in unexpected ways. There begins a bond which turns into a love of need. And of course…all leads to tragedy.

Like ‘True West’ — I will repeat what I said about that show. This is the best version that I have ever seen of “Spider Woman’. The production is undeniably haunting. The pain, the suffering is remarkably heart stopping and the sexual dynamic leaves you drained. Cava, who plays the Gay guy is a total triumph in the acting department. This is the best thing he has ever done. The story was made for him to act in. Brad Cooreman (Valentin) exudes tremendous strength and sexuality on the stage. The sexual sparks between the two could light up Van Ness Avenue. At one point in the play, Cava says to his roommate: “I am a woman – I want a man. Just like you want a real woman.” These performances were as powerful as you can get. It brought me close to tears. SEE IT!

Beautifully executed under the crystalline direction by Matthew Graham Smith.

THE FAR OUT YEARS….

Janis Joplin soon to be subject of bio-pic

Hey, Man! It’s “Far Ouuuut Time” every Tuesday after the performance of “Love Janis” at the Marines Memorial Theatre. You too can have your “Summer of Love” with Tie-Dye Tuesdays at ‘Love, Janis.’ That’s every Tuesday in Sept. All you have to do is wear a tie-dyed shirt and you will be treated to a special post-performance talkback with the cast, as well as some very special guests. For instance…on Sept. 5, you can meet Laura Joplin, Janis’ sister and author of the musical play. On Sept 12 you can meet the legendary Bill Hamm who originated the psychedelic light shows at the Avalon Ballroom. Tuesday Sept. 19, Sam Andrew, founder of ‘Big Brother and the Holding Company’ – Janis’ first band will be on hand to smooze. I think I have an old- Tie-dye Tee buried somewhere.

NOT FAR OUT ENOUGH…BUT!

MATT DILLON TALKS TO COSMOPOLITAN ABOUT BEING HUNKY. “When I was younger and people referred to me as a heart-throb, I hated it. But now I love it! If they call me a heartthrob now, I’m like “yeah, man! They called me a heartthrob!” Buzzin comments…”Yeah, man! I hated it too!”

There is the musical at the Marines Memorial…now word is in that Zooey Deschanel has beat out Lindsay Lohan plus Scarlett Johansson for the lead role of Janis Joplin in a soon to be made film biography of Joplin’s life. Celebs say: Well…Zooey, Zooey and Phooey! What does it mean.”

A MINI REVIEW FROM AN ARDENT READER IN A FAR AWAY KINGDOM.

“Just heard from my friend Gerald D. from Mountain view. Saw Julia McGinnis at Plush Room. Said it was awful. She did a lot of shtick but no substance. Place packed, and she didn’t sing any standards, just some funny things(that wasn’t too funny) and a couple of arias. He said never again, would he go to the Plush room. They kept everyone waiting and shoved him behind a post. Sounds awful.” — Romula deKulmonski, of San Diego. Buzzin sez: “Thanks for the second hand review.”