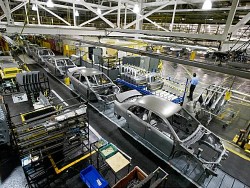 When the wealthy Toyota Corporation decided to close its NUMMI plant in Fremont, California, it offered its 4700 workers none of the severance benefits and priority in re-hiring routinely provided to laid off employees of Ford, General Motors, or Chrysler. Yet there has been little public criticism of Toyota’s callousness, as a media often scornful of American auto companies remained largely silent. The reason for this double standard: Toyota has a great public image due to its “green” cars. Like Whole Foods and Nike, Toyota’s green image allows it to mistreat workers without paying a public relations price. Toyota does not practice the anti-union fanaticism of those other companies, but after securing massive profits from “Cash for Clunkers,” its heartless conduct toward U.S. workers is troubling.

Plant closures in these tough economic times have been getting increased media attention, with the plight of laid-off middle-age workers seen as embodying the decline of the American Dream. But we have not heard much of such stories from the worker victims of Toyota’s planned closure of its Fremont NUMMI plant, despite the personal and community-wide devastation this action will bring.

Why the lack of attention? Some is attributable to the late August timing, as much of the media and its audience is on vacation. And Fremont does not have the blue-collar connotations of Rust Belt cities where plants have closed – an auto plant seems almost out of place in a capitol for high tech.

But one would like to think that Toyota’s first plant closure in the United States would be particularly newsworthy. The fact that it has not proved such is likely because Toyota’s green image has led it to enjoy a long United States media honeymoon.

While arguments can be made that Toyota should not have closed NUMMI, the culpability of its conduct is more centered on its treatment of the affected workers.
Simply put, they treated them as if they had been visitors to Toyota’s factory, rather than valued employees who invested their work lives toward producing quality cars and significant corporate profits.

None of the laid off employees were offered jobs in Toyota’s San Antonio plant, which will produce the Tacoma model formerly built in Fremont. Such priority in hiring is customary when workers are laid off by other car companies operating in this country. And NUMMI workers will get none of the enhanced severance payments for longevity available to laid off auto workers elsewhere.

Toyota used its corporate power to avoid treating its unionized workforce fairly. And a media that loves to blame UAW workers for the decline of the nation’s auto industry is now giving Toyota a pass as it kicks 4700 of such workers to the curb.

Why? Because Toyota is identified with fuel-efficient cars. And it created the Prius, whose fuel efficiency has made it the choice of the environmentally-conscious class.

Traditional media reporters are far likely to drive a Toyota, or know someone who does, than they are to know an auto worker, or likely any blue-collar unionized employee. The media itself is loyal to the Toyota brand.

The Product over the Producer

A public that gets angry over big American cars with low gas mileage, pesticides on fruit and vegetables, steroids in meat, and that has been trained to equate morality with the lowest price is harder to anger over the mistreatment of worker / producers. Nike became a hip icon despite creating an entire industry based on producing sneakers in sweatshops, and Whole Foods’ even thrives in labor-conscious cities like Berkeley and San Francisco, despite its official opposition to both unions and health care reform.

Only very rarely – such as in the grape and vegetable boycotts of the United Farmworkers of America – is the public willing to stop buying a product it customarily enjoys because of worker mistreatment. Which means that as long as people feel good about themselves by driving Toyotas, they are not going to get exercised about some laid off workers in a city they little know.

According to a recent study, Toyota accounted for 19.4 percent of all Cash for Clunkers sales and had two of the top three best-selling models. This fact was not lost on UAW President Ron Gettelfinger, who stated, “It’s unfortunate the company chose to close a U.S. facility after benefiting so greatly from the federal Cash for Clunkers program, which is funded by U.S. taxpayers.”

In closing its only UAW-represented plant, Toyota joins Whole Foods and Wal-Mart in working in an almost entirely union-free environment. These companies are transforming middle-class auto and retail clerk jobs downward, reversing decades of gains by blue-collar workers.

While promoting greater economic inequality, these corporations garner plaudits for their commitment to “green” practices. It’s a clear case of the public missing the forest for the trees, an irony that will not be lost on the 4700 soon to be laid off NUMMI workers who now face a very uncertain future.

Randy Shaw discusses the UFW grape boycott and other boycotts in Beyond the Fields: Cesar Chavez, the UFW and the Struggle for Justice in the 21st Century