Towards a Lieberman-Proof Majority in the Senate 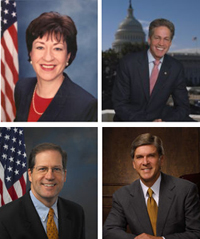 As Congress and the President face a showdown over Iraq, polls show that voters trust the Democrats more than George Bush – by a margin of almost two-to-one. But don’t expect the Senate to stand firm on withdrawal as the going gets tough, despite heroic efforts from Majority Leader Harry Reid. While Democrats technically have a majority in both houses of Congress, they only control the Senate 51-49 – and that’s only if you count Joe Lieberman as a “Democrat.”

To get real change, winning additional Senate seats in 2008 is a priority. But activists must be strategic in attaining this goal, and that means prioritizing four Blue States that currently have a Republican Senator up for re-election: Oregon, Maine, New Hampshire and Minnesota. It would be nice to pick up other seats in more conservative states, but activists need to keep their eyes on the prize – and that is a Lieberman-proof majority.

In recent weeks, liberal bloggers have been wildly promoting Senate candidates in places like Alabama, Idaho and North Carolina. It’s exciting to have Democrats running everywhere, but none of them have been elected yet. In 2004, the netroots were confident about Senate victories in Oklahoma and Alaska – none of whom materialized. While it’s important to contest races in every state, it’s better at this stage to be realistic.

In “Whistling Past Dixie,” political scientist Tom Schaller warned Democrats that the South is the most hostile and conservative part of the country, so that it’s foolish to pin the hopes of building the party by “winning back the South.” Better to pick up seats in other parts of the country where voters will be more receptive to a progressive agenda. If we can pick up seats in the South, that’s great – but that should be gravy after a hard-earned victory in more hospitable territory.

Part of the reason why 2006 was so successful was that, beyond Howard Dean’s Fifty State Strategy, liberal activists focused early on winnable Senate seats and shored up strong challengers. An effort was made in 2005 to target Republican Senators in Pennsylvania, Ohio and Rhode Island – so that by October 2006 the battle had moved to more difficult races elsewhere. Democrats would not have won Senate seats in Missouri or Virginia (and thus a majority) if they had not first firmed up the “low-hanging fruit.”

Being strategic is even more important in the Senate because every state from California to Wyoming has equal representation. With 32 “red states” that Bush won in 2004 and only 18 “blue states” that Kerry won, Democrats will always have an uphill climb in the Senate to push a progressive agenda. Therefore, there is simply no excuse for any state that voted for John Kerry to have a Republican Senator – as we cannot afford to lose any one of those seats.

Which brings us to the four target seats for 2008. Republican Senators Gordon Smith of Oregon, Norm Coleman of Minnesota, John Sununu of New Hampshire and Susan Collins of Maine are all up for re-election, and activists must prioritize their defeat now while it’s still early in the cycle to firm them down. And while these four races are on everyone’s radar, Democrats still have their work cut out for them.

In Maine, Susan Collins has always cultivated the image of being a pro-choice moderate who bucks the party leadership. But the reality is that she’s only independent on votes where it won’t be decisive, and she is more conservative and partisan than her colleague Olympia Snowe. Collins endorsed War without end by opposing a firm deadline to get out of Iraq, proving that she’s on the wrong side of the most contentious issue for 2008. And Joe Lieberman just endorsed her for re-election.

Congressman Tom Allen from Portland has declared that he will run against Collins, and appears to have cleared the field for Democrats. While Allen represents the southern half of the state, Maine has a track record of electing statewide candidates who come from the northern half – a challenge, but certainly not one that is insurmountable. Many liberals hope that Susan Collins will be the Lincoln Chaffee of 2008 – a moderate Republican who loses because voters are angry with Bush. But Maine is far less progressive than Rhode Island, meaning that it’s no sure thing.

In New Hampshire, John Sununu is in trouble for being dangerously out of step with a state that is becoming more Democratic. Last November, New Hampshire Democrats defeated two House incumbents, took control of the state legislature for the first time since the 1930’s and overwhelmingly re-elected their Governor. Today, Sununu votes with George Bush on the War and on stem cell research.

But Democrats have not settled on a candidate, and one of them leaves much to be desired. Katrina Swett (the daughter of San Mateo Congressman Tom Lantos) was the New Hampshire co-chair for Joe Lieberman’s Presidential campaign, and from what I can tell shares much of his politics. Steve Marchand, the 33-year-old Mayor of Portsmouth, is also running and has more progressive support – but so far he’s lagging behind in fundraising. If Marchand picks up steam, that could change.

Minnesota also has a competitive primary in its Senate race. Norm Coleman was elected in 2002 after Paul Wellstone tragically died in a plane crash, and has since opposed a withdrawal deadline for Iraq and voted against stem cell research. Among Democrats, Al Franken has picked up support since declaring last February, but early polls show that he’s not well-liked. This week, millionaire lawyer Mike Cerisi entered the race – who has run for Senate before but didn’t do well.

Minnesota is a deep-blue state, and there is no shortage of other Democrats who can enter the race to challenge Coleman – including Minneapolis Mayor R.T. Rybak and State Senator Dean Johnson – in a race that is a “must-win.” But in a crowded primary that already has a celebrity and a millionaire, others could be discouraged from running, leaving Democrats “stuck” with a weak nominee. Franken and Cerisi have some work to do, or else another Democrat needs to enter the race soon.

In Oregon, Gordon Smith is one of the few Republicans to oppose George Bush on Iraq withdrawal, but opposing the War seems to be a newfound religion for him. He was also one of the key Republicans to engineer Trent Lott’s comeback as Senate Minority Whip.

Smith is vulnerable, but Democrats have yet to recruit a big-name candidate to run. Congressman Peter DeFazio from Eugene is a strong economic populist and would make a great candidate – and activists are trying to draft him as a candidate. He’s giving it thought, but is worried that he won’t raise enough money to run statewide.

It would be great if Democrats could knock off Pete Domenici in New Mexico, John Warner in Virginia, Elizabeth Dole in North Carolina, Larry Craig in Idaho, or Jeff Sessions in Alabama. And it would be especially sweet to defeat Mitch McConnell in Kentucky, who is the Senate Minority Leader and the “Darth Vader” of campaign finance reform.

But before doing that, activists must focus on defeating Collins, Sununu, Coleman and Smith – because those are the more winnable states that should be firmed down. Maybe after a few months of campaigning, they can afford to divert their attention elsewhere, but as of this writing there’s still a lot of work to do in the blue states. And we’re still not there with a Lieberman-proof majority.