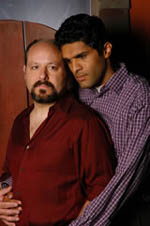 SOMETIMES ‘SIGNIFICANT’ OTHERS’ ARE NOT THAT SIGNIFICIANT!

Playwright Tom Kelly has a way with words that bring fresh new looks at age-old problems in love. The Lover that was lost way back then. A Chance meeting to see the lover again that you thought was lost forever. The excitement of a Gay cruise with a big moon up above. Surely, this will be the night that I will meet Mr. Right is the look in the longing eyes that stare out to sea.

Getting Older does not necessarily mean that we get wiser. Love when you are more mature is different than the romance and roaring hormones of the teenage years. Kelly touches on these issues is our continuing struggle with love, romance and love/hate romance. Nothing is left out in the five plays “Significant Others”. Kelly may be drawing on his experiences. Why else would he know them so well?

Not everything is peachy keen with romance. There is the inevitable cheating.the hurt.the fights.and no one escapes the experience without deep scars. The play – “Roadside Assistance” is a potent reminder how tender and fragile relationships are. Young Country boys can work on their trucks all they want – but they can’t hide the betrayal from one and another. Strong acting in this “Roadside” really burns rubber on the stage. These men could kiss the chrome off a hitching post.

In another play of the evening there are the daredevils. Two teens go to the prom. They are in love, but hide it from their schoolmates. One decides that it is time to let everyone know. He decides to drag his lover on the stage and dance with the boys and girls on the dance floor. They will be the only boy-boy pair. We can only imagine what might happen – as they hold hands and head for the dance floor. Poignant and stunning acting engage you right to the very end.

There is one play that needs some pruning. “Twice blessed” looks into the hearts of two men on a Look Out Point – something like “Land’s End”. There are two problems with this play. It is too long and there is a credibility factor. While both actors are good – the younger man practically throws himself over the cliff for the other man who is out of shape and older. Now there are many older men – young men relationships, but generally if they are not both appealing – one is doing it for money. However – that is not the cast in “Twice”. It’s a good play – and each actor does a great job with their part, but I didn’t believe them. This is where the credibility factor comes in. It’s magic – we should be able to identify with the people and the story. I was not convinced. This is a minor annoyance – one that could be rectified. It does not take away from this mostly enjoyable evening. In my opinion – a shorter version and a different mature actor – could make this a masterpiece.


Alan S. Quismorio director has a way of bringing out the soul of a play. I was wowed with his restaging of Harry Cronin’s “Dooley” When I see his name associated with a play – I know that I am in for a quality evening of theater.

Significant others give you five ways to enjoy an evening. Think of it a “Clothes”. You can Tone Down, Go Dark, Drop in some color and Make it a Black-Tie Affair. There’s more to this evening at the Theater than just talk!

THE LEE HARTGRAVE FAME AWARD TO GOES TO ERIC RICE AS THE MOST INTRIGUING ACTOR IN AN ENSEMBLE PLAY.

The hit musical play “Rent” is going to the big screen. And local actors may benefit – because the filming will take place on “Treasure Island”. Yes, the Island is now back in the film biz. “Rent” is based of the Opera “La Boheme”, but they did not use the music from the Opera. They tell the story about starving artists who have trouble with their landlord and trouble paying their rent. The time is the time of “Aids”. I wish them good luck with this project – but wonder if there will really be huge audience for it on the screen. I saw it as a nitch thing. Lets use “Hair” as an example. The movie version was a disaster. Hey – what do I know? I’m just a news agitator!

HEADLINES FROM VARIOUS PAPERS: Powell to leave Cabinet – Rice to move up. Celebs ask: Move up to what? A Rice Cooker in Iraq?

JOB MARKET SIZZLES FOR ‘O5 COLLEGE GRADS. One grad sez – “Gee Whiz – you mean there is a job at McDonald’s?”

PRESIDENT BUSH PRAISES RICE’S ‘STRENGTH, GRACE AND DECENCY’. A Celeb mutters: “Where can I get some of those glasses?”

Buzzin will clean your toenails for a humorous tip. Heard anything? Send it to buzzin@aol.com