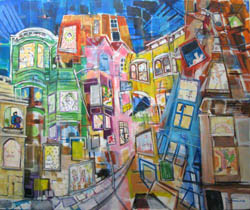 Since its inception this spring, DA Arts has attracted a group of highly educated and talented local artists. Tod Berman is a case in point. A Brown University grad, he has traveled in Greece, a Classical education. He now teaches. Todd maintains an active web site, and has thrown a lot of energy into participating in the usual ways in the local art scene– Open Studio, and the like. It goes to show, we have more talent in this town, and talent educated at the best schools America has to offer, then there are professional venues willing and able to showcase it. At present, Todd draws better than he paints, which is a normal progression and augers well for future growth. His drawings, available to be seen on his web site www.theartdontstop.org are spot on. As my builder friends would say “he nailed it”.

The paintings, however, show promise, and are bright and cheerful, but still say less with more. Could be the palette, which to achieve the power he displays with graphite, needs more editing. Could be a laudable desire to show the local scene in it’s best light.

With titles like Apartments in the Mission, and The Apartments, The mostly 18x12inch canvases are reminiscent of Dufy. In fact, they go no further than Dufy, which in view of native son Mathew Barneys recent oeuvre on display at SFMOMA is perhaps where painting has reliably plateaued.

One of Bermans best is Sixth St. Neighborhood. This dynamic composition in exploding diagonals and uncomplicated colors seem to refer to the Hotel Hugo just across the street and it’s Fenestration project. One habitué, far gone into Thunderbird or Night Train, rummaging in a shopping cart, when asked to comment during this reviewers visit was still able to call out accurately “its Impressionistic! It’s Abstract!” Talk about interactive.

One striking image on the artdontstop.org shows a shiny new police car at rest in the alley next to DA Arts — how appropriate. This image cries out to be painted by Todd, and on a large scale. An increase in scale in general would help all his work. When he does it such a painting surely belongs on Sixth St. Perhaps RDA will buy it for the lobby of the new Plaza Apartments?

Todd plans an interactive closing event in front of the gallery sometime in July. Make sure to check out his website for details. Todd should go easy on the “interactive” and “collaborative” which are after all only buzz words of the moment. The concept is already implicit in what he has displayed , if our friend about to board the Night Train is any example.