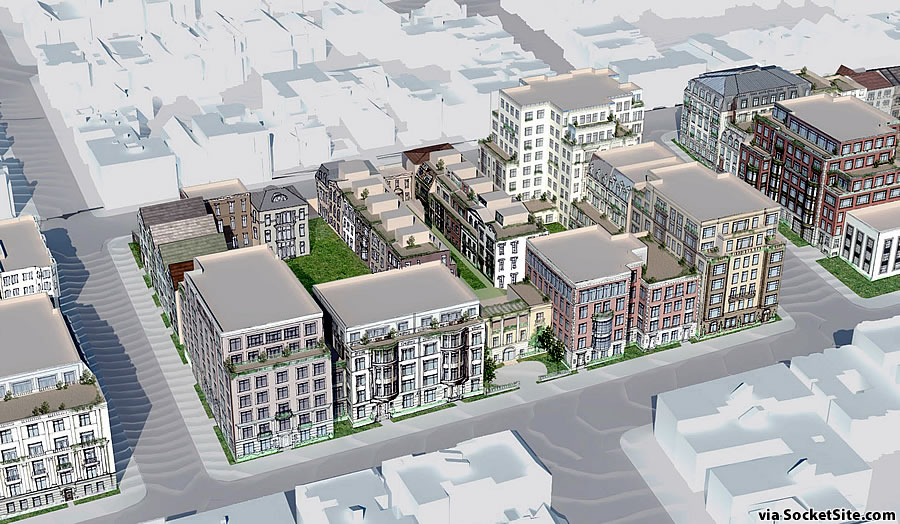 Developers navigating San Francisco’s drawn-out entitlement process often face a dilemma. If they want a smooth permitting process they should play nice with neighbors. If not, then hello discretionary review and possibly goodbye permits.

As we speak, this conundrum is playing out in Presidio Heights where a developer is proposing to build 240 housing units atop the 5-acre CPMC California Street campus set to close its doors in 2019.

San Francisco-based real estate developer TMG Partners submitted its preliminary project assessment to the planning department back in March for its 3700 California Street project after more than two years of discussions with neighbors surrounding the project.

But in a response letter dated June 27, planning blasted TMG Partners for not building enough housing.

TMG’s proposal is a classic example of how to break ground on new housing in San Francisco is a full contact sport. Neighbors have a lot of power, especially neighbors with time and money. At any point neighborhood coalitions can easily stymie the entitlement process with discretionary reviews or lawsuits, paving the way for projects to be abandoned.

“I’m satisfied with the work TMG put in around the community because I know how frustrating our system is,” he said. “I’m not satisfied with our system, I wish TMG had by-right ability to build as many units as possible.”

For those unfamiliar, Moss is referring to a type of zoning law that allows buildings to be constructed “by-right” if the project complies with local zoning regulations. It would abandon the discretionary review process, which allows neighbors to request the Planning Commission review a project in a public setting opposed to the normal process where planning deals with it.

“If they chose to build out the entire allowable density they would build zero units…because the millionaires around the site would sue them into oblivion – that’s a fact,” Moss said.

In the case of 3700 California Street, a by-right entitlement process would allow TMG to build 320 units without the fear of neighborhood retaliation via a discretionary review.

But in real world San Francisco, developers often face the gauntlet unless a community-driven process is established from the get go, allowing neighbors to sit shotgun with the developers while the project is planned, which is the route TMG from the beginning. Moss says the fault lies with the city’s entitlement process

“If planning handed TMG a fully entitled site for 500 units, no parking, and on-site affordable TMG would build that,” Moss said. “But instead, planning wants them to go out and convince three generations of people who hate dense housing not to sue them into bankruptcy.”

Starting in 2015, TMG began meeting with neighbors including the Presidio Heights Association of Neighbors (PHAN). During the two years of community planning, TMG and nearby neighbors struck a deal that got the neighbors on board. \

“We’re not maxing out every single place on the site,” said Matt Field, chief investment officer at TMG Partners. “The neighborhood had a strong desire to keep the neighborhood character.”

No San Francisco land use debate would feel quite right without the phrase “neighborhood character” thrown in the mix. For Presidio Heights, architectural character is a big deal as well and TMG seems to have struck a balance with all of it.

“Rather than designing several large buildings across the site we designed a few smaller buildings, each would have a unique architectural character to fit in with the neighborhood,” Field said. “There’s not one height across the entire site.”

Much of the site’s zoning allows for buildings as tall as 80 feet. The current hospital includes buildings ranging from 85 feet to 112 feet. But plans filed with the planning department call for 39 buildings to be built “ranging from three to seven stories and heights of 33 to 80 feet,” according to the preliminary project assessment.

So, who decided how tall the buildings would be? The neighbors or the developers? Either way, it appears TMG persuaded PHAN to sign on to the project

A recent letter by PHAN included support for the 3700 California Street project, meaning the two parties reached some sort of agreement that PHAN feels will preserve the “look and feel” of the neighborhood.

“The PHAN Board has concluded…that the plans for the CPMC site, which now reflect specific architectural designs as well as general site plans, reflect a thoughtful and high quality redevelopment of the site that is deserving of our initial support at this time,” the letter read.

But questions remain unanswered over how TMG garnered support from the Presidio Heights neighbors. Is it because TMG is proposing to build a quarter less housing then the site is zoned for?

Another puzzler is how TMG will comply with the city’s inclusionary housing policy, which calls for projects over 10 units to include either on-site affordable housing, off-site, or for developers to write a big check to the affordable housing trust fund TMG has yet to publicize its decision, providing another interesting twist to the story.

Will Presidio Heights neighbors allow for affordable housing to be built at 3700 California Street? Are people with lower incomes included within the neighborhood’s “context” and “character”? The most recent Housing Balance Report released by planning in May offers little hope that the answer is yes.

Affordable housing is rarely built in District 2 – 37 net units in the past 10 years to be exact. District 2 includes Presidio Heights, Pacific Heights, Cow Hollow and the Marina among others.

If TMG chooses to build its required 18 percent affordable housing on site, Presidio Heights will see more than 40 new affordable units – more than the last decade combined for the whole district.

With the hospital not set to close until 2019, there’s plenty of time for TMG to weigh the pros and cons of building affordable units on-site. There’s also plenty of time for neighbors to withhold support for a project that either brings lower income people into the neighborhood or too many people in general.

If developers as large and politically influential as TMG let neighbors reduce what they build, it does not bode well for other builders.  This project offers the perfect opportunity San Francisco to act boldly to address its housing shortage—which means more units on the site.