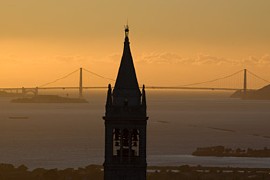 Sports Illustrated has called Memorial Stadium the most beautiful place in the country to watch a college football game, and Tightwad Hill has some of the most beautiful views in the Bay Area. In addition to a perfect view of the field (that’s closer to the field that the top row of Mt. Davis at the Oakland Coliseum), Tightwad Hill spectators have stunning views of the Golden Gate Bridge, San Francisco, Mt. Tamalpais and San Francisco Bay.

In addition to the gorgeous views, you can do just about anything you want on Tightwad Hill with just a few exceptions. Tightwad Hill rule number one: Don’t root for the visiting team. Rule number two: Don’t wear anything red, the color of the hated Stanford Cardinal and the equally hated USC Trojans. If by chance you happen to be wearing some red apparel on Tightwad Hill, you will soon hear a chorus of Tightwad Hill regulars shout “take off that red ….” It doesn’t matter if the offending red item is a jacket, pants or bikini top. If its red, it’s has to come off.

Otherwise you can do whatever you want on Tightwad Hill, including consuming the BYO beverage and smoke of your choice, be it a nice Cuban or a little something from Humboldt County — things that are prohibited inside Memorial Stadium.

This season on Tightwad Hill is special because the regulars who hang on Tightwad Hill will have to find a new place to hang out next year, because Memorial Stadium will be closed next season for a year long retrofit. The Bears will be playing home games next year at AT&T Park in San Francisco, where there is no Tightwad Hill.