by Alison Stevens Rodrigues on November 30, 2005 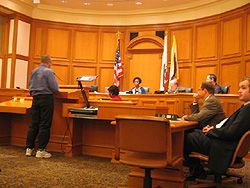 New ground was broken at yesterday’s Land Use Committee hearing where members forwarded, with recommendation to the Board of Supervisors, amendments to legislation that would adjust the condo conversion process in order to give priority to its previous participants. A reported 1,512 units competed in this year’s TIC (tenancy in common) condo conversion lottery, with 61 owners having participated for a fourth time and 34 for a fifth. Meanwhile, 2005 also has seen a record number of Ellis Act evictions, which often are used as a tool for real estate speculators to turn buildings into condos. This new legislation, donned with recent amendments, aims to guarantee conversion for some of the longtime participants, while discouraging evictions that leave senior citizens, disabled persons and low-income families out on the street.

When first introduced by Sup. Bevan Dufty in September, this legislation raised a number of red flags for community members and tenant activists who worried that it would make the condo conversion process, and consequently the eviction process, even more appealing to property owners.

“Some of us don’t have many years to wait,” said Richard Kaplan, an elderly gentleman in support of Dufty’s legislation. “I’d like to convert two units for my wife after I’m gone.”

Meanwhile, another senior, Herbert Weiner, was evicted under the Ellis Act last year. He said that as a relatively healthy 66-year-old, he was able to survive the ordeal, but would hate to think of an eviction happening to someone 20 years older than he is. Before new legislation that would protect owners, there needs to be legislation that protects potential victims, he said.
Sup. Jake McGoldrick said his suggested amendments to the legislation would help to do just that. In addition to an amendment that would sunshine the legislation in December 2006, is one that would require the Department of Public Works (DPW), which oversees the TIC conversion lottery, to prepare a report, before Aug. 1, 2006, analyzing factors related to the 2006 lottery.

Barbara Blong of Senior Action Network said the sunshine clause and the report will be crucial in examining how many people the legislation is helping.

McGoldrick agreed and said he looks forward to seeing the results of the DPW report and hopes they’ll be useful.
“We want to know where we’re going,” said McGoldrick of the Board. “We don’t want to fly by the seat of our pants and we don’t to make decisions based on rhetoric.”

But perhaps the most significant amendment is one that would require all lottery applicants to verify that they haven’t evicted elderly, disabled or catastrophically ill tenants since Jan. 1, 1999. Originally, this date was going to be set at January 2000, but activists asked that it be pushed back so as to prevent the evictors of Lola McKay from benefiting from this new legislation.
“I support this amendment and appreciate the significance of the Jan. 1 date,” said Dufty.

McKay passed away last year. At 83 years of age, she lived alone, had no family and was being evicted by John Hickey Brokerage firm, said Ted Gullicksen of the San Francisco Tenant’s Union.
Her death was precipitated by the eviction, said Raquel Fox of the Tenderloin Housing Clinic. Those who wanted McKay, a low-income senior, to leave her home of 40 years disconnected her refrigerator and suggested she eat cat food, Fox said.

An outraged tenants’ rights community rallied around her until the end, Gullicksen said, and she became a symbol of what was happening during the dot com years.

Since she was evicted in February1999, pushing the date back to January of that year would ensure that at her evictors wouldn’t be able to convert any longer. It also would have the second advantage of covering more buildings, as the epidemic of Ellis Act evictions really began in 1999, said Gullicksen.

When asked if he was satisfied with the legislation as amended, Gullicksen said that if passed, it would be a move in the right direction.

“It moves toward a direction where we’ll begin looking at the lottery as the way to regulate Ellis evictions by making it as difficult as possible to convert condos if you have evicted tenants under the Ellis Act, or if you are not following the behavior called for under the condo conversion law of offering units to tenants and having tenants actually buy,” he said.

McGoldrick said the amended legislation would help protect different classes of people. The law is the minimum level of morality and this legislation is trying to recognize at least that level, he said.

According to Nicola McIntyre, a property owner and a tenants’ rights activist, it succeeds in that recognition.

“There is no easy answer to this,” she said. “Thank you for giving thought to both sides.”