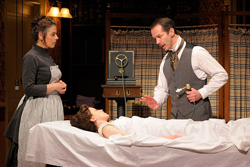 THE SPAM ABOUT ‘SPAMALOT…RICHARD CONNEMA’S (Talkin’ Broadway) chat line reveals some news about the Chronicle…THE NEW CONSERVATORY THEATER’S FIVE-STAR GALA…A.C.T. WILL ‘ILLUMINATE THE NIGHT WITH 2009 GALA …WEST COAST PREMIERE — ‘THE STORY’ OPENS AT SF PLAYHOUSE…A.C.T WILL PREMIERE ‘VOLLEYGIRLS’ AT THE ZEUM THEATRE…MAGIC THEATRE UNVEILS NEW COMEDY…A.C.T’ TAKES FLIGHT WITH ‘WAR MUSIC’…Plus Buzzin looks under the hairdo’s at The OSCARS! SPIDER MAN CLIMBS THE WALL ON STAGE IN NEW MUSICAL…

Buzzin’s KSFC RADIO’S AIRWAVES PAGE SIX…Will talk you through the ‘Spam’- Give you some ‘Buzz’ about two Gala’s…treat you to some gossip…go Russian for an evening with Katya Smirnoff-Skyy…and Connie Champagne may sip some…PLUS spin some webs with Spider Man.

Mr. Three Dots…loves premieres. And we’ve got a hundred on ‘em. This
one originated at the famed Public Theatre (NYC) starring Phylicia
Rashad, and directed by Loretta Greco. “The Story” by Tracey Scott
Wilson and directed by Margo Hall is opening at the SF Playhouse with
joint producing by the Lorraine Hansberry Theatre. The Buzz? Based on
a true story that includes murder, investigation and a newspaper
reporter. The paper is not pleased (are they ever). Will the truth
come out? Don’t ask Mr. Three Dots – he knows nothing.

WHAT’S A GIRL TO DO? JUST THROW THEM UP IN THE AIR? We are talking
Volleyballs here. “Vollygirls”, the Rob Ackerman’s new comedy takes
us on a trip to a girls Volley Ball team at a down-an-out High
School. And of course, pushy parents play out their own personal
dramas. Wow – that’s a surprise … sez Mr. Three Dots. The featured
actors are from the graduating class of the A.C.T. M.F.A. Program. At
the Zeum Theatre. There will be no reviews of this play – but you
can tell Mr. Three Dots what you think about it. He loves to hear
from fellow dots.

And here’s one of those Dots…Velma writes with this comment – “I
admire Edward Albee’s plays no matter what the reviewer (Buzzin)
says. I’m sorry Velma, but that’s what reviewers (critics) are for…to
disagree.

FA-LASH from Mr. Three Dots…Ace Publicist Phil Lanides has left his
PR job in Palo Alto to start his own PR Company in the sports and
music realms. Lots of luck Phil…Three dots will miss you. Hey, did
you know I can sing in three-dot style?

TALKIN’ BROADWAY’S Richard Connema on the SF Chat line heard from
(Dramedy) one of his fans with this question: “When will they fire
Theater Critic Robert Hurwitt?) Connema’s reply…”I don’t think it is
always up to Hurwitt as to what shows he goes to see.” He goes on to
say that lots of theatre in the Bay Area is not reviewed at all.
“Even when Steve Winn was reviewing shows along with Hurwitt, not
everything was covered.” Now the Chronicle has pared down even more…
so expect even less reviewing, especially of local plays. Also expect
more free-lance writers to appear on the Chronicle pages, if the
Paper lasts. It’s cheaper, and they don’t have to pay benefits to the
free-lancers. You know – just like the Examiner! Dot…Dot…Dot!

SPAM ME A LOT! …Headed for the Golden Gate Theater in May, Monty
Pythons ‘Spamalot’ the musical that says on their logo – is “ripped
of from the motion picture”. The Tony award winning musical has more
Spam fun than a can of Spam. The show at the Golden Gate will star
Television’s John O’Hurley. Get your ‘Spam’ tix starting this Friday
(27th). The Original cast recording of Monty Python’s SPAMLOT won the
2006 Grammy Award for Best Musical Show Album. Don’t try to eat it –
the recording that is…the taste is all on the stage. There will be
dots galore with Divas and Knights and flatulent Frenchmen and one
legless Knight. Oh My…Mr. Three Dots is Dot Breathless! So, I will
just sip on my SPAM-A-LATTE! Thanks Starbucks. Yes, I’m insane!

Last year A.C.T. had a sold-out success with their fund raising Gala.
This year’s Black-tie event will be held at the elegant Four Seasons
Hotel with Headliner Judy Kaye. Kaye, who is now in “Souvenir” at the
Geary Theater, will give the show a magical touch. The special Gala
is to support A.C.T.s extraordinary conservatory. The ‘Illuminate the
Night’ gala co-chairs will be Crane and Geiger Gordon. The event
takes place on Sunday, April 19, 2009 and includes performances by
A.C.T’s Master of Fine Arts Program and Young Conservatory students.
Tony nominated John Carrafa will direct. Info – www.act-sf.org.

Dotting along…The New Conservatory Theatre Center will hold a Five
Star Evening of song, fun and laughter. The Benefit will star Connie
Champagne, Meg Mackay, Tom Orr, Billy Philadelphia, and Katya
Smirnoff-Skyy with a special appearance by the wonderful Stephanie
Temple. F. Allen Sawyer will direct. Where will this be asks Mr.
Three Dot? At the Decker Theatre at 25 Van Ness is the answer to
that three-dot question. But then, you can check it out for yourself
in living color at Newconservatorytheatre.

THIS ITEM MAY TAKE MORE THAN THREE DOTS TO FIGURE OUT. A Celeb
complains to Buzzin about the idea to take car traffic off of Market
Street. Well, here is the Three Dot answer to burn your tires on. The
Celeb says that taking autos off of Market Street will not speed up
Streetcars and buses, because people will be walking in the street.
Duh – Sounds like the Celeb is right. The Politicians have more Dots
in their head than I knew about. What is that song the Scarecrow
sang? – Oh, here it is – “If I only had a Brain?” But then, you knew
that politicians are just wanna be actors – didn’t you? Market
Street is not Utopia – it’s just the ugliest street in town – taking
the cars away will not turn it into Paradise Island sez Mr. Three
Dotter who agrees with the Celeb that you should take your traffic
act to Fresno. And that’s in Three Dot time!

The Magic Theatre in spite of tough economic times is still bringing
exciting Theatre to the Bay Area. Next on the stage is “American
Hwangap, a new comedy by Lloyd Suh. It opens on April 4. Here a
snippet: A Korean immigrant returns to the U.S. to reunite with the
family he abandoned 15 years ago. It’s a homecoming – but one that is
both funny and complex. More info: Google Magic Theatre…and then in
May the Magic will open with a new play “Mauritius”. Who knew that
stamp collecting could be so dangerous? You’ll find out. Pulitzer
Prize nominee and Emmy Award winner Teresa Rebeck turns out a
wickedly smart thriller that will keep your eyes on the ‘stamps’. And
that’s a Dot… capsule look.

Christopher Logue has come up with a fabulous translation of the
‘Iliad’. This World Premiere event will be at A.C.T’s Theatre. The
adaptation by Lillian Groag is wildly theatrical and totally modern.
Groag reignites the wrath of Greek warrior Achilles against his
archrival, with movement by award-winning opera, theater, and ballet
choreographer Daniel Pelzig. There is also the thrill of original
music composed by John Glover alongside an eclectic selection of rock
and pop music. Opens March 26. Info: www.act-sf.org.

Sarah Jessica Parker looked like Glenda the good witch. I thought
that she would float up into the sky at any moment. Or you could say
that her gown was strictly something from “Gone with the Wind” and if
a good wind came along, I’m sure that it would have given her the
lift that she needed…Most of the Gowns were ghastly. Whatever was
that presenter wearing with a big Napkin attached to the front of her
Gown? I hope that she didn’t have to pay for it. Maybe she went to
the Ladies room – and forgot to remove the napkin…Jack Black in his
routine was not funny. Then there were the two guys in a film clip
that showed them laughing at clips from the nominated films. Most of
which were serious. Not funny… what a disaster that was. Also stupid
was Ben Stiller’s lame imitation of another star. It bombed – was he
on drugs? But the show did have it’s moments…Hugh Jackman was great…
the Baz Luhrman produced production number was fantastic…but seemed
more like a tribute to Broadway than to Hollywood. And of course…it
was way too long. But do Bring Hugh Jackman back…he gave the show
some spark and spirit. By the way – most of the films and actors that
won were not from the USA…and Jackman is Australian. Does that say
something about Hollywood? Three Dots is just curious. Some countries
just don’t get it…take Asia for instance…they chopped off Sean Penn’s
ending remarks about “Gays and Civil rights”. The censors are ever
vigilant over there. Should we censor the cheap clothes?

A NEW WEB IS GOING TO MAKE ITS DEBUT ON BROADWAY. ‘Spider-Man the
Musical is officially called “Spider-Man, Turn Off the Dark.” The
music and lyrics are by Bono and the Edge. Julie Taymor (of Lion King
Fame) will direct. It opened on Feb. 18. The question is this…is
there enough room for Spidey to climb buildings and spin his famous
web? I hope it works – Mr. Three Dots loves new epic musicals.

>>>FOLLOW LEE HARTGRAVE – Just Google him to find out what else he’s
up to.