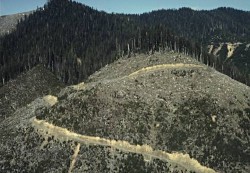 Behold the mixed blessing from recession: less commerce retards the speed by which we strip the earth of unsustainable resources. Think we’ll take advantage of this disruption to ponder our global religion of growth, even press leaders to start serious, comprehensive planning? Free markets aren’t free, comes the painful dis-illusion-ment, and expansion is unstoppable except by war, pandemics, natural disasters, and bad recessions. Have we learned much from the high price for rather low interest rates – today’s nasty late payment?

Of course, “roadless logging” makes no sense: old growth forests are old and pristine because they don’t have roads. Wild, isolated forests we call Nature: roadways (our government at work) transform placid trees into timber that, like mining and ranching, costs far more than users pay.

Logging Roads, the Rivers of Commerce

On California’s North Coast, we know about logged forests, location, and locomotion. If an intrepid logger, Jerome Ford, hadn’t gone hunting for a Gold Rush shipwreck in 1851, these coastal ranges wouldn’t have built baby San Francisco. Coming overland, Ford failed at salvage (winter storms really wrecked the ship), but he marched through treasures worth hundreds of shipwrecks: huge stands of redwood and fir and cedar. What clinched Ford’s destiny – and Mendocino’s, founded two years later with his wood mill – were big trees near rivers that flowed seaward. Get resources to shipping lanes, and viola! the stuff that dreams are made of: building materials sold by the foot.

Logging roads are the transport rivers, spurring industrial “clear-cutting” (to the ground) with high, deferred costs: ecosystem disturbances, massive slides and erosion that spoil streams with sludge. The price we pay for timber extends beyond watersheds; the former Ft. Bragg mill became a toxic dump. One difference: 1850’s logging was slow, dangerous and backbreaking, with laborious handsaws and oxen. Now, machines piggybacked on roads mow down forests, and western wastelands are more visible by air than Russia by Alaskan blowhards.

These leadership defaults spread overseas as well. U.N. Secretary General Ban Ki-Moon sharply criticized the G-8 finale, “The time for delays and half-measures is over. The policies they have stated so far are not enough [and] we must work according to the science. This is politically and morally imperative.” Despite participant spin (“historic agreement” said Britain, “clear step forward” echoed Germany), science-based environmentalists moaned, “A massive opportunity has been missed here,” “a disgusting abdication of leadership and responsibility,” even the august NY Times complained, “things fell apart.” When, we ask, were they ever “together”?

Can Business Save Us From Business?

What, you reply, today’s capitalism can save us from predatory tycoons that in 150 years did so much damage? Only by leveling the playing field with fossil fuel taxes, to offset the true costs for dirty energy. Only by adding in the buried costs of burning oil (mammoth defense budgets, imperialistic invasions, huge medical costs for breathing ailments, plus clean-up) will we spur competitively-priced, innovative clean energy. If dirty oil had to pay its whole way, we’d quickly fund wind, thermal, and solar projects. “If you care about the planet,” she concludes, “save the jet fuel, cancel the conferences and focus on creating the economic conditions for energy entrepreneurship.”

So many questions, so few “known knowns” – and reader input invited. What affluent nation will sacrifice massive treasure to resolve a planetary crisis – that will help foreigners, competitors, even foes and poor people? Easier to fund invasions here and to Mars. Do not our fear-based, tribal, national divisions inherently block breakthrough co-operation beyond summits or the United Nations? Do we trust today’s profit-driven capitalism to deliver us from the evils of, well, yesterday’s profit-driven capitalism? Can science and technology, those wondrous, double-edged swords, pull our collective chestnuts out of the fire, that is, our rising global furnace? Stay tuned: we’re in for a bumpy road.