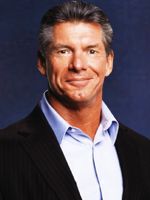 Just as Bob Hope used to entertain the troops in Vietnam, so today does Vince McMahon’s World Wrestling Entertainment fill that role in the testosterone-bulked mutation of Vietnam we call the Iraq war. This week a special edition of the WWE’s “Smackdown!” show on the UPN television network, backed by a full-page ad in The New York Times, made the parallel unmistakable, as the Undertaker and Rey Mysterio cavorted in rings set up on military bases, and McMahon solemnly promised our men in uniform that upon his return home he would tell naysayers that “you said they can go straight to hell.”

Though nowhere close to the popularity peaks it achieved
first in the mid-1980s and then again in the late 1990’s,
pro wrestling has long been one of popular culture’s most
reliable Zeitgeist meters. And like his Connecticut
forebear Phineas Taylor Barnum, Vincent Kennedy McMahon —
Forbes 400 billionaire and pioneer of postmodern “sports
entertainment” — isn’t just an A-list exhibit to Mencken’s
formulation that no one ever went broke underestimating the
intelligence of the masses. Simultaneously and magically,
McMahon has taken the circus to the mainstream, infected
the latter with the antisocial values of the former and
packaged the merchandise to prove it. He’s our cheerful
tour guide to the dark side of the American soul.

Those of us who have been fascinated by this pseudo-sport
since we were knee-high to a turnbuckle have always known
as much. Others — French semioticians, serviceably trendy
journalists, Parents Television Council-pandering senators,
populist governors, action movie stars — either awake to
it in cycles or exploit it in fashion. As with the Mafia’s
mirror on capitalism, the growth of wrestling from a carny
demimonde to a national marketing base has rendered it
exactly the same as the less marginalized aspects of sports
and society, only more so.

Consider the layers of evidence of the thorough
wrestlingization of our culture. Debased political dialogue
fueled by shouters on talk radio? Bill O’Reilly and Al
Franken owe everything to heel-vs.-babyface interview
technique.

Infiltration of performance and/or physique-enhancing
drugs? Retired baseball most valuable player Ken Caminiti
recently dropped dead and others are sure to follow. But
literally dozens of wrestlers in their 20’s, 30’s and 40’s
have dropped dead in the last two decades — an
epidimeological trail hidden in plain sight, noticed by
few, cared about by fewer still. In the silver age of the
American empire, death itself has turned into a punch line
of the old commercial, “Is it live or is it Memorex?”

Finally, those of you who are outraged by the WWE’s stunt
in Iraq must understand that this is a bipartisan
phenomenon, and more than a depraved metaphor. Lowell
Weicker, one-time scourge of the Senate Watergate
Committee, sits on the board of directors of World
Wrestling Entertainment, Inc. After its predecessor, a
closely held family company, went public in 1999, Weicker
profited handsomely from the sale of WWE stock. Earlier in
the decade Weicker, as governor of Connecticut, had helped
burnish McMahon’s image by appointing him to the board of
the Special Olympics at a time when the Justice Department
was investigating him on charges of drug trafficking and
the harboring of a pedophilia ring. (McMahon later was
acquitted in federal court of the drug charges; the grand
jury never indicted him for anything else.)

Vince McMahon isn’t through with us, nor are we with him.
The marketing juggernaut that he created will ride up and
down a few more times, and it’s impossible to predict
whether he’ll wind up as the toast of Wall Street or the
next Martha Stewart behind bars. Our attention wanes at our
own peril.