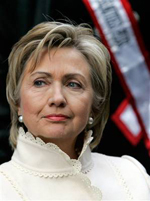 Following Hubert Humphrey’s narrow defeat to Republican Richard Nixon in the landmark 1968 presidential election, a leading advertising man noted that the Democrat lost because he failed to paint a picture of what life in the United States would be under Nixon. Unfortunately, Americans soon found out. Four decades later, it is becoming imperative that Barack Obama and John Edwards follow the ad man’s advice regarding frontrunner Hillary Clinton. Clinton’s attempt to sound tough at the South Carolina debate last week by bragging that she would not meet with world leaders critical of the United States was just one of many signs that, as Obama suggests, Clinton represents “Bush-Cheney lite.” Here’s a reasonably likely scenario for life under President Hillary Clinton.

After easily defeating Republican Mitt Romney in the November 2008 election, president-elect Hillary Clinton refused to question outgoing President Bush’s refusal to withdraw troops from Iraq. “He’s entitled to the full term for which he was elected,” Clinton told reporters, “and we’ll have our chance to change Iraq policy soon enough.”

As the Iraq nightmare continued, Clinton assembled her cabinet. The media described her foreign policy team as “tough and smart,” and said Clinton was fulfilling her campaign pledge to keep America strong in our dangerous world.

Clinton’s domestic staff resembled that of her husband’s 1993 cabinet: a gender and racially-balanced mixture of Washington insiders who are unlikely to make any waves. Top talent was deterred from joining the Administration by speculation that Bill Clinton will be Hillary’s chief domestic advisor, rendering other voices to the sidelines. Clinton is expected to be the Administration figure that his wife sends out to events in the African-American community.

In her inaugural address, Clinton vowed to move the nation toward universal health care for all Americans by the end of her term. She gave no specifics on particular plans, saying that she would work out the details with the Democratic-controlled Congress. Clinton emphasized throughout the fall campaign that she had “learned from her mistakes of 1993-94,” and that she would not try to take on too big a reform of the nation’s health care system at one time.

Clinton also used her inaugural address to send stern warnings to Venezuela and Iran against further “meddling” in their regions. Clinton said that nobody should take the wrong message from the gradual U.S. withdrawal from Iraq, and that our military would “fight any battle, at any time, and at any place to make sure America remained free.”

Clinton vowed during her address to sign a stem cell research bill, end the Bush “gag rule” on the funding of abortion-rights counseling abroad, and to guarantee the right of government entities to bargain with drug companies for lower priced medications. She promised to sign legislation on all three issues as soon as the bills passed Congress.

Clinton also called for a national campaign against global warning. She provided no details, but said the effort would be unprecedented in scope, and that America would exercise world leadership on the issue.

Clinton also announced that her soon-to-be submitted budget would eliminate the Bush tax cuts for those earning over $200,000 annually.

Clinton vowed to tackle immigration reform, and said she would look toward a bipartisan solution that she could sign before the end of the year.

As the parties head toward the midterm 2010 elections, few could have predicted the dramatic change in fortune that followed the Democrats’ November 2008 sweep. President Hillary Clinton has provided Republicans with just the boost their fundraising machine needed after the Party was badly outspent in 2008. Longtime conservative direct-mail expert Richard Viguire told CNN, “I thought I would have to retire until Hillary came along, but now the checks are pouring in faster than I can get new mailings to the post office.”

Although Clinton’s overall approval numbers are at 60%, she has proved a galvanizing force for conservatives. Republicans are banding together to stop what they describe as “Hillarycare,” the modest health-care reform bill that would expand coverage by ten million adults. Although Sicko director Michael Moore and other health care advocates have lambasted Clinton’s plan for at best leaving thirty million Americans uninsured, Republicans are arguing that it is the first step toward socialized medicine.

Clinton’s maintaining of Bush’s record military budget prevented the Democratic Congress from spending sufficient new funds to meaningfully impacting working people’s lives. After eight years of federal cuts to vital education, public transit, health jobs, and affordable housing programs, the Democratic base sees the Clinton agenda as too little, too late. Disillusion is rampant in low-income communities, and while organized labor has seen a more pro-union NLRB, it is having a difficult time rallying the troops for the midterm elections.

After the November 2010 elections, pundits are falling over themselves quoting Yogi Berra’s legendary adage, “it’s deja vu all over again.” These sentiments are prompted by results which retained Democratic control of the House, but gave Republicans the Senate. This put Hillary Clinton in the same position of divided government that her husband faced in the last six years of his term.

Progressive activists have begun circulating links to a “You Tube” video from July 23, 2007, which shows former Senator John Edwards warning voters that Clinton would bring back “triangulation” if elected to the White House. Edwards’ words have proved remarkably prophetic, as Hillary has followed the same script Bill used when he signed welfare reform and other punitive legislation that the media trumpeted for representing a “compromise” between the two major parties.

As Hillary leads the Democrats into the 2012 elections, she can point to the passage of an immigration reform measure more progressive than those that had failed under her predecessor, George Bush. She is also highlighting her signing of a prescription drug law for seniors, a bill indexing the federal minimum wage to inflation, and a health reform bill that was not all the President wanted, but at least left only 35 million without health care.

President Clinton kept her promise to get most American troops out of Iraq by the end of her first term, and pundits have praised her hard-line approach to Iran. In fact, Connecticut Senator Joseph Lieberman was recently overheard praising Clinton for “delivering a neo-conservative Middle East policy without the baggage of the neo-conservatives.”

Progressive grumbling has steadily risen over Clinton’s centrist policies, and many activists are kicking themselves for allowing the moribund Democratic Leadership Conference to nevertheless end up with the Democratic Party nominee in 2008. As a longtime DailyKos.com poster put it, “We could have had Obama or Edwards, and a major recruitment push might have gotten Gore into the 2008 primary race. Instead we ended up with a candidate and president who, like Jimmy Carter and Bill Clinton, is not a progressive. Was Franklin Roosevelt in 1944, or possibly Lyndon Johnson in 1964, our last progressive president?”

Four years after being left for political dead, the Republican Party under Presidential Candidate and Florida Governor Charlie Crist is in a neck and neck race for the White House. Although Crist is more liberal than any Republican nominee since Dwight Eisenhower, the Party has coalesced around him in order to beat the hated Hillary.

Can the Democratic Party overcome Clinton fatigue and keep the White House? Or will voters allow their personal animosity toward Clinton to overcome their agreement with Democrats on issues?

Let’s hope we never have to answer these questions.