The United States $pends Another Thanksgiving At War 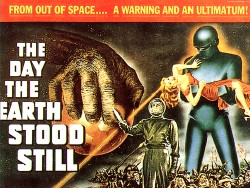 In the classic 1951 film, The Day the Earth Stood Still, an alien visitor comes to Earth with a message warning Americans to stop engaging in ongoing violence and wars. The film made a major splash, and a 2008 remake starring Keanu Reeves was critically panned but a big box office hit. Yet while the public appears to support an end to America’s ongoing overseas wars, the government’s pro-war policies over the past six decades are unchanged.

The common 1960’s bumper sticker – “It will be a great day when our schools get all the money they need and the air force has to hold a bake sale to buy a bomber” – is as applicable today as then. We have another Democratic President spending billions on a war of choice that cannot be won, while allowing the cutting of programs that serve human needs at home. And while many Democrats were once willing to criticize excess military spending, this changed with Clinton’s military build up; 9/11 then forced arguments against Pentagon bloat off the political radar screen. Now President Obama wants Democrats to rally behind a new weapons treaty that requires a nation that can’t afford to house, educate or feed its people to spend $85 billion on a new generation of nuclear weapons; and he has brought war criminal Henry Kissinger along to boost his campaign.

Perhaps the single leading reason that many progressives backed Barack Obama over Hillary Clinton in the 2008 primaries was Obama’s public opposition to the U.S. invasion of Iraq. This makes President Obama’s toeing the line of the military industrial complex even more disappointing, and a prime example of his failure to provide a transformative presidency.

Why is the United States the only nation in the world that has been in overseas wars almost without interruption since 1941? After all, our popular culture promotes the message that Americans are a “peaceful” people.

Our movies or television shows rarely address the idea that Americans lack housing, health care, adequate public transit, and food because the nation spends too much money on unnecessary weapons systems. Few Americans know how much of our budget goes to the military – but many know about the alleged high cost of public employee pensions, the so-called Social Security “crisis,” and other public expenditures that conservatives widely promote as “waste.”

In 2002, Barack Obama seemed to understand that the nation must change its military, priorities when he spoke out against the U.S. invasion of Iraq. But President Obama is no more willing to fight the military industrial establishment than he is the Republican Party, and he has surrendered to the Pentagon on virtually every issue since taking office.

Obama’s “withdrawal” from Iraq left 50,000 “non-combat” troops in the country. And he has committed to a process that will continue our war in Afghanistan until at least 2014, with thousands of U.S. troops likely to stay beyond even that date.

And some of these young men and women from primarily low-income backgrounds will lose their lives.

These troops cost billions of dollars. Yet you won’t hear any Tea Party folks arguing that these troops should be withdrawn for fiscal reasons.

Nor will you hear this from many Democrats.

Obama has virtually destroyed major Democratic Party opposition to endless war, and still claims he seeks to extricate us from such conflicts. This same contradiction underlies his plans to spend $85 billion to modernize nuclear weapons that he claims to want to eliminate.

Michael Rennie issued his warning in The Day the Earth Stood Still amidst the backdrop of the Cold War and concerns with nuclear annihilation. The decade ended with outgoing President Eisenhower warning the nation to be wary of the “military industrial complex” – a message, like that of Rennie’s alien visitor, that has gone unheeded.

What is it about the United States that leads it to spend more money on military hardware than every other nation in the world combined?

What leads us to accept the worst homeless problem in the industrialized world, the least available health care system, and the worst public transit system as the price of unnecessary military spending?

America never got its peace dividend after the end of the Cold War. And thanks to Barack Obama’s support for the Pentagon status quo, our best recent chance to redirect the nation’s spending from war to human needs has been lost.