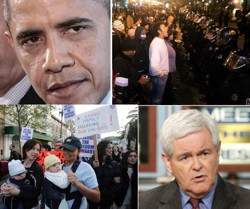 For progressives, the first eight months of 2011 were the worst of times. Not since the Reagan tax cuts and slashing of domestic programs in 2001 have progressives been so left out of the national debate, and the 2011 exclusion occurred with Barack Obama as President. Obama got the year off to a terrible start with his agreement to extend the Bush tax cuts for the wealthy for two years in exchange for one year of extending unemployment benefits. His failure to include raising the debt ceiling as part of the deal then allowed Republicans to use that as a bargaining chip for slashing domestic programs even further in August. But Occupy Wall Street’s emergence in September raised progressive spirits, as has the unexpected rise of Newt Gingrich as the frontrunner for the GOP presidential nomination. Here’s my list of the top ten best and worst political events that occurred across the nation in 2011.

1. The Occupy Movement: even those questioning its tactics admit that the movement broke through the media silence about the extent of income inequality in the United States. The genie is out of the bottle, and the 1% v. 99% framing is here to stay.

2. The Ohio Referendum: Labor’s huge win in reversing the state’s rollback of collective bargaining rights for public employees sent a strong message in a state that is more Republican than is commonly perceived. Wisconsin got more attention, but the bigger victory occurred here.

3. Delaying the Keystone XL Pipeline: The winner of the November presidential election could quickly greenlight this project, but the delay on an environmental calamity that was nonetheless seen as a “done deal” was a huge win for activists. Bill McKibben really helped put this issue on the map, and it was environmentalists biggest win of the year.

4. Immigrant Rights Movement Fights Back: After the failure of the Dream Act in December 2010 and the passage of the nation’s most restrictive anti-immigration law in Alabama, the immigrant rights movement could have packed up and waited for times to change. But instead it fought back. It helped recall Arizona’s anti-immigrant leader Russell Pearce, and has made Alabama even more of a national embarrassment than before. If Latino voters elect Obama to a second term, the seemingly dead comprehensive immigration reform could be back on the political table.

5. New York Approves Gay Marriage: The combination of savvy tactics by activists and a Governor who knows how to use power led to this historic breakthrough. California will either secure gay marriage through the courts, or via a new ballot measure that could come as soon as next year.

6. The Rise of Newt Gingrich: Politically dead this past summer, Gingrich has risen from the ashes to become the likely Republican nominee. Each day finds a new Romney misstep – such as his $10,000 bet – while Newt behaves like the presumptive nominee. No politician better energizes progressives and the Democratic base, and Newt’s nomination would bring Democrats sweeping victories not only in the presidential race but also in the House and Senate.

7. The Courage and Integrity of Bernie Sanders: As Democratic Senators wimp out on issue after issue, it’s the Senate’s independent from Vermont who is the consistent voice for principle. Bernie Sanders built a progressive political movement in Vermont, and has a better understanding of how to move issues – and a greater willingness – than any Democratic Senator.

8. The Discrediting of School Testing: The battle is not over, but 2011 marked a dramatic reversal in support for organizing our educational system around student testing. While the Obama Administration remains on the wrong course, the ongoing scandals over test results have helped discredit claims that non-union charter schools are superior to unionized public schools. If “reformers” spent half as much time trying to ensure adequate school funding as they do bashing teachers unions, the students would really benefit.

9. Greed and Tax Breaks for Wealthy Not Good: Income inequality was worse than ever, but 2011 began with the media still glorifying hedge fund managers, bankers, and the “greed is good” mantra. It took the Occupy movement to expose the widespread cultural shift against such values, which has even given backbone to national Democrats to highlight opposition to tax breaks for the rich.

10. The Revival of Student Activism: 2011 was a great year for student activism as young people put their bodies on the line against tuition hikes, administration salary hikes, and growing inequality. They have proven an inspiration to all activists.

1. Obama’s Deficit Deal: As bad as the terms was the President’s surrender to Speaker John Boehner, who progressives saw as a lightweight. Boehner may have been best known for his artificial tan, but he out-negotiated our Harvard grad and community organizer President last December and again in August.

2. Alabama Immigration Law: A racist law befitting a longtime racist state. The law has hurt the state’s economy and, after the taking into custody of a German Mercedes Benz exec, exposed Alabama to national ridicule.

3. Wisconsin Attacks Collective Bargaining: Unlike Democrats, when Republicans take power they punish their enemies and reward their allies. Wisconsin Governor Scott Walker provoked a counter-reaction and may be recalled, but he did what his corporate backers hired him to do in rolling back collective bargaining for public employees.

4. Supreme Court Overturns Wal-Mart Class Action: The single worst court decision in 2011 was also the biggest gift to corporate America, which will have far fewer class action lawsuits to defend against. The decision was so reactionary that I wrote an April Fools story based on what the oral argument foreshadowed the ruling to be, and it was widely believed to be the actual court ruling.

5. Obama Overturns EPA Smog Restrictions: In overturning stricter air regulations proposed by his own EPA, Obama exposed himself again as a man who lets the business community call the shots on key issues. His reversal came after his chief of staff Bill Daley argued that the tougher regulations would cost jobs, a longtime conservative canard that Obama had rejected in the past.

6. Funding for Wars, Not Schools: The United States can’t afford to educate, house or provide health care for millions of its residents, but 2011 showed there’s plenty of money for wars in Afghanistan and Libya. We spent $1 billion in Libya without a public debate, and the only reason we left Iraq is that the Iraqi government kicked us out. Obama’s military budget is little changed from that of Bush, and Defense Secretary Panetta is as protective of Pentagon bloat as Don Rumsfeld.

8. Grover Norquist Takes Over GOP: 2011 was the year that the Norquist “no new tax” pledge took control of the majority of the House, all of the leading GOP presidential contenders, and essentially now controls the Republican Party at every level of government. And it has proved impervious to threats of economic collapse or political defeats.

9. Prisons Remain Chief Program for Poor: Despite the poor economy, the prison industrial complex was maintained in 2011. Prisons have become the nation’s chief housing and jobs programs (though inmates get less than a living wage) for the poor, particularly African-Americans and Latinos.

10. Domestic Funding Cuts: It rarely makes the news anymore, but 2011 saw steep declines in federal funding for legal services, housing, and virtually every domestic program that candidate Obama pledged to increase when running in 2008. And in nearly all cases, the President accepted the cuts without a public fight.