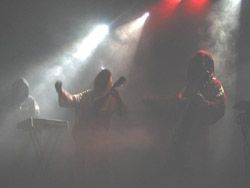 Let us start with the name.

Who is this band that calls themselves Sunn O)))? When asked to describe Sunn O)))’s music I’m always at a loss. For while their cauldron brews diverse strains of modern music including Black Metal, 20th Century Classical and Improvised Drone, Sunn O))) is merely a still reflective filament in this sonic storm. Really they are a primitive gospel trio, testifying to the power of their Lord, pure sound. It’s old time religion for the pagan. Moreover, what’s with the O)))? I feel the easiest way to interpret that it is to view the “O” as the infinite source of manifestation and the “)))” as that source radiating outward. Feel free to come up with your own interpretation.

Sunn O))) have been meditating on a unifying theory of vibration since 1998. But while their recordings have allowed them to branch further and deeper into the emotional resonances that emerge from primal sound, the true experience of Sunn O))) is felt live. A Sunn O))) performance can be characterized most easily as a dramatization of the Lord creating the Universe in real time. Vast sheets of stoic fuzz guitar and molasses-thick Moog keyboard emissions intertwine in tangles that span the aural spectrum. Appearing as enrobed magi defrosted after centuries of hibernation, the three high priests of Sunn O))), guitarists Stephen O’Malley and Greg Anderson and drone-manifestor Rex Ritter, invoke these ancient constellations of harmonic grace, a primordial magic unfolding at a glacial pace.

I had the privilege of speaking with Mr. O’Malley last winter, at which time he explained over the course of a rather long conversation, the inspiration behind his work with Sunn O))) which he co-founded with Anderson in 1998. In reviewing what we had discussed, I ferreted through my notes from that interview for months looking for a pithy statement or section that could somehow evoke the whole of the discussion. I realized later that it was only the indivisible whole of the conversation that could accurately represent the depth of what was conveyed. It then occurred to me that the same thing held true for their music. While I was intrigued by their music, it was only upon witnessing an uninterrupted performance that I had the opportunity to turn the front of my mind off and bathe in the continuous primal vibrations, feeling the sound evolve and learning its motions. Like feeling the arc of old Noah’s lifetime transpire across the sky (which we’ve all done or wanted to do at some point), some experiences simply cannot be compressed. It’s like Morrissey once said – these things take time.

But in all honesty, Sunn O))) really and truly rock. You would be hard-pressed to find a collection of musicians whose unfettered celebration of sound rumbles your core as satisfyingly as these guys. Greg Anderson once joked that audiences get a free massage from the vibrations at a Sunn O))) show. Their sound is indeed that tangible. Furthermore, if you duly surrender your faculties for the duration of the show, you will leave with the sensation of deep neural cleansing that accompanies full REM cycles of sleep. Because regardless of anything else said here, Sunn O))) feels good.