The Strange Career of Michela Alioto-Pier 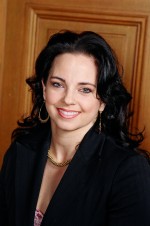 Yesterday, Supervisor Michela Alioto-Pier announced her bid for California Insurance Commissioner. Despite the fact that most San Francisco elected officials have endorsed her opponent, Assemblyman Dave Jones. Despite earlier rumors she was going to run for Lieutenant Governor. Despite efforts to contest the City Attorney’s legal opinion that she cannot run for re-election – a battle we can now conclude she has abandoned. As other sources have noted, this will be Alioto-Pier’s third attempt at statewide office – having twice run for California Secretary of State. She also made a disastrous run for Congress back in 1996, and did not attain public office until 2004 – when Mayor Gavin Newsom appointed her to serve the rest of his term on the Board of Supervisors. The scion of a political dynasty, Alioto-Pier is not viewed on her own merits as particularly bright or effective – and has one of the worst attendance records at City Hall. In a state where politicians play a game of “musical chairs” for constitutional offices as they await the chance to run for Governor or Senator, is this Alioto-Pier’s real agenda?

Progressives have many reasons for opposing Michela Alioto-Pier. She has by far the most anti-tenant record on the Board of Supervisors, and in 2007 championed Don Fisher’s ill-fated Downtown Parking Initiative. But this story is not about Alioto-Pier’s stands on the issues. It’s about her long career of opportunism and entitlement that defies “good government” principles.

Michela Alioto-Pier comes from a large political dynasty in San Francisco. Her grandfather was the late Mayor Joe Alioto, and her aunt is ex-Board of Supervisors President (and thrice mayoral candidate) Angela Alioto. Her brother, Joe Alioto Jr., ran for Supervisor last year in District 3 (and lost to David Chiu) – and her cousin Joe Alioto Veronese made an aborted run for the California State Senate. Michela got her start in politics after college, by working as an aide to Vice President Al Gore.

In 1996 when she was 28 years old, Michela moved to Napa County to run for Congress against Republican Frank Riggs – in a district that hugged the Pacific Coast up to the Oregon border. I was new to California at the time with only a basic knowledge of state politics, but even I could see that it wasn’t a good idea. Wouldn’t a “swing voter” living in Eureka, I asked, resent the child of a San Francisco political family moving into their district just before the filing deadline – believing they could actually represent them?

The result was not pretty. Alioto-Pier proved to be blatantly unfamiliar with the district, and even mispronounced the names of towns in a debate. She was slammed for unpaid taxes, and for not voting in past elections. Her campaign was rocked by a scandal – when her brother and cousin were caught infiltrating a TV station by posing as a “North Coast correspondent” to cover the campaign. In a Democratic-leaning district that Bill Clinton carried by 13 points, Alioto-Pier lost to a weak GOP incumbent by a seven-point margin.

After losing, Alioto-Pier said she would try again – but leaders in the Democratic Party urged her to back out. She had just blown their chance at winning the district, and State Senator Mike Thompson (who was from the area) wanted to run. She agreed, but after they promised her an uncontested primary for California Secretary of State. 1998 turned out to be a great year for Democrats in the Golden State. Gray Davis was elected Governor by a twenty point landslide, and Senator Barbara Boxer won re-election by a surprisingly wide margin. Only two statewide Democrats lost, including Alioto-Pier.

In 2002, she again ran for Secretary of State. This time, however, Alioto-Pier had to face two Democratic opponents for the primary. She finished third, with 28% of the vote.

Alioto-Pier eventually made it to public office in January 2004, but not by winning an election. Gavin Newsom was elected Mayor, and appointed her as his replacement on the Board of Supervisors. But there was speculation it was political “payback.” Her former boss, Al Gore, had campaigned for Newsom – who was facing a tough challenge from a Green Party candidate. And her aunt Angela – who had run against Newsom for Mayor – endorsed him in the run-off against Matt Gonzalez. Either way, it looked suspicious.

She won her first election later that year, completing her appointed term on the Board of Supervisors. But despite winning public office in her native city, Alioto-Pier has often been rumored not to live in San Francisco. She still keeps a residence in Napa County, but claims her primary home is in Pacific Heights. A 2006 report also showed she had the worst attendance record among her ten colleagues, missing one out of three meetings in a year.

It’s been apparent for years that Alioto-Pier doesn’t like her colleagues on the Board that much, and she even said in 2008 that we should repeal district elections. She explained that many of her Pacific Heights constituents complain that they fought hard to pass district elections, but “now they want to go back to citywide because they’re not being represented properly.” Of course, wouldn’t that be an indictment of Alioto-Pier?

Nonetheless, Alioto-Pier had challenged an opinion by City Attorney Dennis Herrera that she cannot run for re-election in 2010. San Francisco law says that Supervisors can only serve two full terms consecutively. A “full term” is four years, but Section 2.101 of the City Charter says that a Supervisor who served “in excess of two years of a four-year term” would be deemed to have served a full term. Alioto-Pier served about three years of Newsom’s unexpired term (2002-2006), and was re-elected in 2006 to a full term.

But now that Alioto-Pier is seeking statewide office in 2010, that question is moot. For a while, there were rumors that she would run for Lieutenant Governor – and political observers are not very surprised that she is running for Insurance Commissioner.

Which raises a disturbing pattern about these statewide races. Many politicians run for Lieutenant Governor, Insurance Commissioner or Secretary of State – not because it is their burning desire. They do it to build up their resumé, buying time while hoping the opportunity arises to run for Governor or Senator. It’s very unusual to get someone like Debra Bowen, who ran for Secretary of State because she had a passion for voting rights – and clearly wanted the job, rather than wanted to use the job. For most California politicians, what statewide office you choose to seek is not that important.

Consider what happened in 2006. The ex-Governor (Jerry Brown) ran for Attorney General. The Attorney General (Bill Lockyer) initially ran for Governor, but ended up running for Treasurer because his chances were nil. The Treasurer (Phil Angelides) and Controller (Steve Westly) both ran for Governor – in a murder-suicide pact that did nothing but re-elect Arnold Schwarzenegger. Meanwhile, the Lieutenant Governor (Cruz Bustamante) and the state Insurance Commissioner (John Garamendi) ran for each other’s jobs. Is Michela Alioto-Pier running for statewide office – to buy time for the next opportunity?

It sounds like it. Alioto-Pier’s campaign announcement is tailored for the office of Insurance Commissioner, but so were her campaign talking points for Secretary of State in 1998 and 2002. No candidate would admit they’re running as a “stepping stone,” so they craft a message that sounds good.

But more revealing is what her aide, Bill Barnes, told Fog City Journal last week when her candidacy was still just a rumor. Alioto-Pier’s plans, said Barnes at the time, could be resolved by whatever happens in the special election to replace Ellen Tauscher – where Lieutenant Governor John Garamendi is a candidate. If Garamendi loses that race, he would presumably run for re-election – foreclosing an opening for Alioto-Pier to run for Lieutenant Governor.

If she’s truly running for Insurance Commissioner, why would Alioto-Pier still be toying with the idea of running for Lieutenant Governor – as recently as late last week?

A former legal aid attorney, Dave Jones has amassed strong support from Democrats across the state – and is considered the front-runner in the race for Insurance Commissioner. Most of the San Francisco politicians had planned to endorse Jones anyway, and some – like State Senator Mark Leno – had already done so months ago. But the implication was obvious: Michela Alioto-Pier is not well liked.

As Aaron Peskin told Fog City Journal last week, “nobody in their right mind is going to take [Michela] entering the Lieutenant Governor’s race, the Insurance Commissioner’s race, or any other race outside Pacific Heights seriously.”