The Spectacular Benefits of Tactical Urbanism 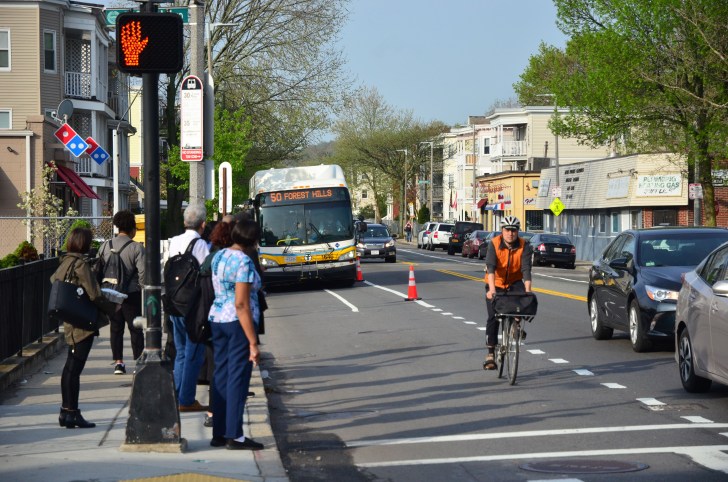 A review of 20 bus- and streetcar-related “tactical urbanism” projects, such as temporary dedicated bus lanes or temporary “bus bulbs,” found that they speed journeys, improve safety and raise ridership to a surprising degree.

The projects  — including the Hennepin Avenue Bus Lane in Minneapolis, the King Street (streetcar) Pilot in Toronto, and New York’s experiments with temporary “floating” bus-stop islands — cost less than $300,000 and were completed with temporary materials in a short time.

Nevertheless, they had big benefits. The review found that temporary bus lanes and other pilots aimed at speeding bus and streetcar trips reduced journey times for riders from 20 to 50 percent.

Meanwhile, projects that were aimed at improving safety — through road diets or bus lanes — led to a 40 to 65 percent reduction in collisions. These projects also boosted transit ridership up to 17 percent, and were overwhelmingly popular with riders, the study found.

Many projects also had unintended, spin-off benefits. Miami’s 2017 “Streets for People” project, which added temporary bus and bike lanes, sped up rush-hour journeys for drivers by 19 percent. Toronto’s King Street Pilot — which removed car-through traffic from an important streetcar route in order to speed up service — increased biking along the corridor an amazing 440 percent.

“Typical transit projects can cost millions of dollars and take decades to come to fruition,” said author Tony Garcia in a statement. “With a quick-build approach to transit, you can deliver transit service immediately, while longer-term planning takes place. For many of these projects, if the pilot had not been implemented, city residents might still be waiting for these improvements.”

Of the projects studied, city and transit officials planned to make the changes permanent in 77 percent of the cases.

The research was conducted for the Transportation Research Board by survey with 36 people involved with the projects, from city and transit agency officials to the nonprofit and advocacy groups that often served as partners and initiators.

Also, if an element of a project isn’t working, change it. It’s an experiment — go with it! Tactical-urbanism projects can be adjusted, tested and rejected or accepted based on outcomes.