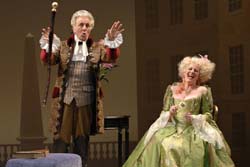 I have seen many productions of the Sheridan play – but never one with such a magnificent set. The main structure is of the town square with tall buildings on either side of the square. The front buildings turn to reveal royally furnished rooms to your left and to your right. They knew how to furnish in those days.

The Rivals is set in Bath in 1775 and one of its most enduring characters is Mrs. Malaprop (Jill Tanner) who always mixes up her words. Here’s one: As she praises the virtues of a man: — “he is the very pineapple of politeness.” There are many more hilarious Malapropisms from the Malaprop character – which are better heard than reading them – so I will leave them for you to hear in person.

The father (Charles Dean) of Captain Jack Absolute is also given some great lines by author Sheridan. This is a super one: While telling his son, Captain Jack (Anthony Fusco) that he will only inherit the family fortune if he takes a wife picked by him. He says to his son when he protests. –“If you have an estate, you must take it with the livestock on it.” Dean, you may remember from the fabulous “White Christmas” as the enduring General. In Rivals, he again turns in a Galvanic performance.

In this satiric romp lovers toy with each other as the play rolls along with one comic take after another. It’s fun – because it never takes anything too seriously. The enthusiastic cast has the perfect timing to really bring out the silliness of the entire play. “Rivals” is not an easy play to do. The actors must learn an awful lot of lines – and a flub would certainly mess up some of the delicious, cutting lines. This cast must have channeled that period. Adding to that, they wear the fantastic costumes so well, it’s as if they actually stepped out of the 1700’s.

The Rivals is another triumph for A.C.T. The Company has been on a successful roll for some time now with one hit after another.
DIRECTOR LILLIAN GROAG HAS GIVEN US A VERY FUNNY AND SMART ‘RIVALS’ INDEED.

THE WONDERFUL SCENERY IS BY DONALD EASTMAN. THE EXTRAORDINARY COSTUMES ARE BY BEAVER BAUR, WHO HAS BECOME SAN FRANCISCO’S MOST FAMOUS COSTUMER. THE MOOD ENCHANCING LIGHTING IS BY NANCY SCHERTLER AND THE TERRIFIC SOUND IS BY JAKE RODRIQUEZ.
(Advisory: ‘Rivals’ is over three hours long with one intermission)

ZORRO IN HELL IS A HELL OF A RIDE

CULTURE CLASS IS THE BEST AT BRINGING CULTUREFANTASTIC POLITICAL COMEDY WITH NOT SO SUBTLE WICKEDNESS OR POLITICAL CORRECTNESS. Their newest is “Zorro In Hell” at the Berkeley Rep.

He signs his name with a slash of a “Z”. His name is Zorro – and this inventive take-off on the famous caped defender is just a hoot. In the story is a 200-year woman who says that she has slept with every famous writer in the world of her 200 years. Then there is the first “Chicano” and a talking bear that seems to like men. Throw in some Homeland Security agents, jokes about Cheney and Bush, Wild West baddies and some Native Americans and you have a wide swath for the Culture Class bunch to whip up their little Hell for Zorro. The whole show is a frame for the jokes.

No one is safe from the ridicule. Gay, Straight, Hispanics, American Indians and the land-grabbing U.S.A all get their chance. All of this is accomplished with vintage film clips from old Zorro films and the mastery of the projection design by Alexander V. Nichols. The story is about a young writer – a sitcom writer, who is sent to the South West to write the real story about Zorro. When he arrives he encounters a bunch of characters that could be described as the “Nightmare in Hell Gang.” He stays at the “Desert Inn” – sort of a “Bates Motel.” Alfred Hitchcock would be very comfortable here. The Inn has many surprises…and they are just hilarious. Near the end, Zorro even climbs up the side of the theater. This is not just Theater – it is Insanity theater. And, I loved every minute of it.

“Zorro in Hell” was created, written and performed by Culture Clash: Richard Montoya, Ric Salinas and Herbert Siguenza. The fast-cracking direction is by Tony Taccone. You’ll see the best set design this year by Christopher Acebo and the wonderful whimsy Costumes by Christal Weatherly. The fabulous Sound Design is by Robbin E. Broad.

AT THE BERKELEY REP.

STOP THE PRESSES! “Our Lady of 121st at The Playhouse on Sutter is still doing boffo biz. Bill English has directed this powerful, must see play.

Randy Adams the always cheery managing director of Theatre Works will be leaving shortly to explore other avenues. Adams is extremely popular and will be missed by all Theatre– goers. Their new work at the TW will be “Emma” == a musical romance. It is adapted from the novel by Jane Austen. Starts April 26. Music lyrics and book by Paul Gordon. Good story. Always thought it would make a great musical. It has all the elements.

Oh, thanks for the Latte with lite foam. Lets see, where was I. Oh, that’s good. Oh yes…The New Conservatory will present Paul Rudnick’s West Coast Premiere of “Valhalla” – a comedy. Here’s the story: Valhalla will intertwine two stories: The life of Ludwig, the 19th century “Mad King of Bavaria” – not to be confused with Bush. The next story follows the adventures of James Avery, a fictional misfit gay Texas teenager in the 30’s. If he lived in Texas – no wonder he was a misfit. Both characters are tracked from childhood through their deaths. They are ultimately revealed as time-traveling soul mates. The play explores beauty and madness as both Ludwig and James Pursue lives of operatic passion. Well, I guess it’s not about Bush after-all. It starts May 20. at NCTC.

FA-LASH: I HAPPENED TO GLANCE AT THE PERSON SITTING NEXT TO ME READING. THE BOOK WAS CALLED “BARBRA: THE WAY SHE IS.” Intrigued, I moved my chair a little closer so that I could find out what the book was about. He noticed and seemed to be annoyed, but he did give me the dust cover to read. Here is what I found. In this book Streisand’s “Sexual Conquests” are revealed in this new biography of Barbra Streisand and it alleges the superstar’s list of lovers includes Diana, Princess of Wales’ former husband Prince Charles and her lover Dodi Fayed. The book is by Christopher Anderson and claims that Streisand is “cheap.” Has a “Maria Callas-sized ego” and is prone to huge tantrums and has a star-studded list of former conquests. The book claims that the list also includes Warren Beatty, Ryan O’Neal, Steve McQueen, Kris Kristofferson, Don Johnson, Jon Voight, Elliott Gould, Andre Agassi, Richard Gere, Omar Sharif, Liam Neeson and Peter Jennings. This is just some of them the Anderson book proclaims. The author also alleges that Streisand, 63, was banned from the White House during Bill Clinton’s presidency by his wife Hillary after the former First Lady discovered the actress had stayed overnight while she was away. “The Way She Is” arrived at bookstores yesterday. Celebs say: We hope that all these guys were in their prime.” Latte’s all around for Streisand. And she can even take an extra packet of sugar to take home so she can save a little money.

IT’S MY PARTY – Lesley Gore was a Teen Idol in 1963 when she first sang that song at a friends Birthday Party. She sky rocketed to fame and followed that hit with “Judy’s Turn To Cry”, “You Don’t Own Me”, “She’s A Fool”, “That’s the Way Boys Are” and “Maybe I Know”. Now you can party with Lesley Gore on April 22, 8pm and Sunday April 23 – 3pm at Brava Theater Center. Gore also appeared in two films you may remember – “Girls on the Beach” with the “Beach Boys” and “Ski Party” with Annette Funicello and Frankie Avalon. Gore, a Lesbian lives with her partner of over 23 years. In 1964 she had this hit: “Sometimes I Wish I Were a Boy.” See you at the Brava!

MY COFFEE BUDDIES ALSO FILLED ME IN ON THIS STUFF THAT’S GOING ON AROUND TOWN. There is a New Leaf Gala at Teatro ZinZanni with Armistead Maupin& Jazz Singer Paula West – April 10, 6pm til 9pm. Another of the Coffee bunch just handed me this hot off the griddle item, so to speak: “A Caruso Memory: 1906 Concert & Sing-along” – FREE in Yerba Buena Gardens: April 17, 5:30 pm til 6:30 pm. What a wild idea…and you won’t need a Crank for your old Victrola…you can just sing it! What Fun this event will be. I’ve always wanted to do it. To Celebrate Bay Area National Dance Week, we can all join the “Conga Line” kick-off at Union Square April 17, 5:30 pm til 6:30pm. Remember I said KICK-OFF – NOT KICK ASS! See you in line. How will you know me? I’m the one that looks like “A Sort Of A Rock Star Journalist.” Well, we all have our fantasies.