The Return Of Don’t Miss This: Cas Lucas 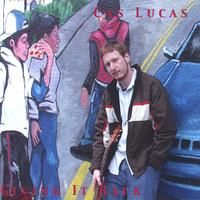 Plus: LA and The Harmony Festival In Sonoma

Recently, I had the pleasure of seeing the wonderful Palm Wine Boys at the Freight and Salvage in Berkeley. Their show featured the return of their guitarist Tom Chandler after becoming a new father. Unbeknownst to me, in his absence, the Boys had tapped the soulful Cas Lucas to fill in. At this particular show I was treated to Lucas’ opening solo act, which was, (with no disrespect to the great Chandler), so good, that I was curious to hear what he sounded like with my beloved Palm Wine Boys! Fear not readers, as Lucas returns to the Bay Area with a new CD, “Giving It Back”, and promises to be his best effort yet.

Lucas’ raspy yet humble voice belies a worldliness quite surprising for one so young. His song “Home”, conjured for me, the works of bluesman Ben Andrews, a devotee of Howlin’ Wolf, and Blind Willie Johnson. Other songs, like “Dream a Window, and ‘Feel You”, put him for me, squarely on the path of the great storytellers and songwriters, like Pete Seeger, and John Prine.

Watching and listening to Lucas is a joy, because you get the feeling you are watching a true bluesman in the making. Catch him at the Tongue and Groove, Saturday, June 11th at 8:00 pm with his Cas Lucas Band. Don’t Miss This, you will not be disappointed!

LA and The Harmony Festival in Sonoma
Last weekend, I spent a fantastic Memorial Day in Los Angeles, hosted by producer Stephen Bray, who is currently in production on the musical version of “The Color Purple” with Brenda Russell, Allee Willis and Quincy Jones. After a triumphant debut in Atlanta, it will be coming to Broadway in 2006.

Seeing old friends, like film director Jeff Stein, who next week will be inducted into the Rock and Roll Hall of Fame in Cleveland, for his critically acclaimed documentary of The Who, “The Kids Are Alright”. More than thirty years old, his film recently swept the N.Y. Film Festival! Guitarist and songwriter Christopher Cross, who continues to compose and participate in socially responsible causes, and the phenomenal bassist with Bette Midler and Seal, Reggie Hamilton, who has recently developed a new line of jazz basses for the Fender guitar company.

Another old friend, Paul Pesco, (guitarist for Madonna, Hall and Oates, Stevie Winwood, Cyndi Lauper, and others), informed me that he will be playing June 12th, at the Harmony Festival in Sonoma, with new age maestro Kitaro, Grateful Dead drummer Mickey Hart, and Jon Anderson, the founder and vocalist of the British Prog-Rock group Yes. This will be the 26th edition of this festival of health, healing and music.

As I prepared to return to San Francisco, Bray and I were approached outside, by a young man from Baltimore, a stranger amidst these superstar musicians. “My name is Poo Rock”, he told me, “…I’m a rapper, and would you like to buy my CD?… Only $5.00”. “What is your real name?’, I asked him. “William Everett Robinson” he said. “Danger Will Robinson”, Bray said, “You’re talking to Doctor Smith!”

Bray and I reflected on how we first started with Madonna, virtually broke, and hungry to play our music. “Is it any good?” I asked “Poo Rock”. “Hell yeah!… It’s my life Bro’… It has to be good!” I gave him $5.00, promised to listen, and I would even mention him in Beyond Chron. “Wow, you are the nicest person I’ve met since I got to LA”, he told me. “I’m from San Francisco”, I replied. We all laughed and off he went.

One day we may yet hear again from ‘Poo Rock”, aka William Everett Robinson, because in fact his 14 song CD wasn’t bad, not bad at all. Keep it real “Poo Rock”.

E. “Doc” Smith is a musician and recording engineer who has worked with the likes of Brian Eno, Madonna, Warren Zevon, Mickey Hart, Jimmy Cliff, and Pete Seeger among others. He is also the inventor of the musical instrument, the Drummstick. He can be reached via www.drummstick.com