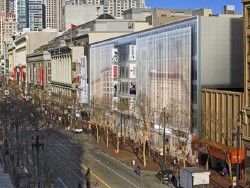 Since news spread that San Francisco’s top planners were circulating online pornography, many joke that we finally understand why project review takes so long. But the real obscenity at San Francisco’s Planning Department has nothing to do with workers distracted by porn. No, what is obscene about Planning’s operations is its commitment to delay. Virtually every project or land use plan is unnecessarily delayed, usually by a fruitless quest for “consensus.” Rather than accept that San Francisco includes people of widely divergent views, planners act like Barack Obama once acted in hoping to achieve “bipartisanship” with Republicans. But whereas Obama eventually learned his lesson, the SF Planning Department continues to give even the smallest of constituencies’ undue control over the land use process. Instead of Planning suffering from distracted or incompetent staff, the core problem is an institutional tolerance for obscene delays.

It’s been said that planning departments in Chicago, New York and other major cities focus on progress, while in San Francisco it’s about process. But San Francisco’s idea of “process” is to empower minority views in a hopeless quest for consensus, unnecessarily delaying up or down votes on projects.

There are many examples of obscene Planning delays in our naked city, so I will focus on two where I have personally been involved. Let’s begin with the pending City Place project on Market Street between 5th and 6th Streets.

I met with developer David Rhoades of Urban Reality and his consultant when this project was first submitted. I told them – in words that now seem naïve – that I could not imagine anyone opposing this effort to bring 250,000 square feet of retail to a long neglected commercial corridor (the City Place site was previously approved for a giant condo project, whose abandonment by a prior owner left the area bereft of commercial activity).

In other major cities, city government would have rolled a red carpet blocks long to show the developers their excitement over this project. This became even truer after the fall 2008 fiscal meltdown, in which City Place moved forward while many projects suddenly lost financing.

But in San Francisco, even a game-changing project like City Place could not escape Planning’s obsession with achieving consensus. And since at least one credible person had problems with including parking in a project that would create hundreds of construction and permanent retail jobs (and even the lowest paid are governed by the city’s higher local minimum wage), that meant that City Place’s approval pace had to be slowed down to address such concerns.

So rather than get on the fast track, City Place was placed on the standard Planning schedule. SF Curbed ran an article in September 2009 noting that the City Place website had projected a groundbreaking for the fall of 2009; if lucky, and if the Commission approves the project on June 10, this high-profile revenue and job creating project will start only a year late.

City Place is a textbook case of how a tiny minority of political insiders need only get the ear of a single Planning Commissioner or top planner to hold projects hostage. Far from a case where there is mass public opposition to projects (as occurred with many of the dot-com developments during the Willie Brown era), prior hearings on the project’s environmental impacts show broad support (I was among those testifying in favor), and little opposition – yet Planning rewarded the handful of naysayers by granting more delays.

The Rezoning of India Basin

In July 2007, the Planning Department initiated a rezoning of India Basin in the Bayview-Hunters Point community. Three years later, no draft rezoning has been scheduled for Planning Commission approval.

India Basin’s rezoning essentially involves only four major development sites. On only one of these sites is there a pending project consistent with the current zoning. This project at Innes and Hudson was submitted in 2004 and revised in 2005.

In 2008, the Tenderloin Housing Clinic, publisher of Beyond Chron and the organization I head, became owner of that site. It’s been quite a learning experience.

Why has the rezoning process for such a small geographic area already lasted nearly three years? Well, San Francisco is committed to community meetings. A lot of them.

And if enough people do not attend, Planning does not conclude, as I have continually told them, that Bayview residents are busy taking care of their kids, kicking back after a long day at work, or engaging in the many activities that are more fun than attending a rezoning meeting. Also keep in mind that those most interested in the community’s land use issues are already preoccupied with monitoring plans for the Hunters Point Shipyard and Lennar’s vast holdings.

No, in Planning’s world the lack of attendance at community meetings reflects a failure of outreach. And this failure requires more meetings. And when these new meetings also are poorly attended, it simply means that the outreach process has failed again.

Just when you think that this circular process of meetings must come to an end, Planning plays the “lack of consensus” card. So after the September 2009 deadline for comments on the draft India Basin plan (extended by a month to give the community more time), Planning and the Redevelopment Agency jointly concluded that the plan lacked “consensus” and yet another community meeting was necessary.

Although the comments were due in September, the follow-up meeting did not occur until March 2010, six months later. And guess what? Consensus was still not reached. In fact, it can never be reached so long as a small number of people want to turn our property into a park (one told the Planning Commission that our site should be the “next Crissy Field”) despite the City or Redevelopment Agency repeatedly insisting it does not want to purchase our land.

Just try to get a construction loan when the final zoning for your property is not in place. So Planning has effectively created a moratorium on development at India Basin, giving the small minority of park proponents exactly what they want.

As I told the Planning Commission in January, it could be ten years between the time development plans for of our site were submitted and any project being built. And given the inability to ever achieve “community consensus,” that may be overly optimistic.

The obscene delays at Planning are institutional.

The problem is a culture whereby a single top planner, or a single Planning Commissioner, or a single Supervisor can delay consideration of projects outside the democratic or public process. I know at India Basin that planners and Agency staff are very frustrated by the delays, but they are helpless to combat a culture that empowers any one of the above forces – along with the Mayor’s Office – to unfairly delay projects.

Absent strong, independent Planning leadership, and a Planning Director with sufficient clout to oppose undemocratic and outside interference in the land use process, small minorities will continue to unduly influence land use processes in San Francisco. Why a city that prides itself on dissent is so fearful of close Planning Commission or Board of Supervisor votes is a mystery, but democracy would be better served if projects got to the final hearing stage much sooner, even if it meant an increase in rejections.

The Cost of Delay

San Francisco cannot financially afford the current system. To take the most glaring example: had the Eastern Neighborhoods rezoning process concluded in a few years rather than several, thousands of housing units would have generated revenue for the city.

Instead, these units are not yet built, costing San Francisco millions of dollars that could have been used to reduce potentially terrible service and program cuts in the 2010-11 budget.