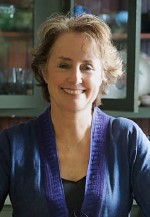 It was only just two years ago that Alice Waters was pilloried in the court of public opinion for daring to suggest that $5 was a reasonable amount for the Federal government to spend to cover the cost of a healthy school lunch for a low income child. The lunch Water envisioned would be full of locally grown, preferably organic fruits and vegetables from nearby farms, and cooked mostly from scratch right at school, or close by. Critics howled – five dollars? For a child’s school lunch? They claimed that parents could pack a peanut butter sandwich from home for pennies, scoffing at the notion that the government should spend $5 on a meal, as if this were a scenario akin to the Pentagon’s famous $435 hammer. And yet, it turns out that $5 may have been an underestimate of what a healthy school lunch really costs …

A parochial school in Carmel was recently lauded by the Jamie Oliver organization for what they say is the “only 100% certified organic lunch program we know of in the country.”

The school apparently does not participate in the National School Lunch Program, which is open to all public, private, and parochial schools if they wish to receive government funds to pay for meals for low income students. However, NSLP participation also brings with it heavy regulation, frequent program audits, and heaps of required paperwork to obtain the government funds, and many private schools can’t afford to comply. Not being an NSLP program means the school is not bound by any regulations regarding portion size or nutritional content of the meals, or any other government requirements, nor are they subject to government inspection or audit.

The meals last year were cooked in the Earthbound Farms kitchen by their own staff, and served by EF staff and parent volunteers. The cost? According to the school’s online payment website, it’s “$4.95 for a regular tray, $5.50 for soup and salad bar only, and $6.95 for a large meal that includes soup and salad bar.”

That’s $5-7 per meal for a lunch program that doesn’t even have cafeteria staff (part of the partnership with Earthbound Farms), or labor costs for anyone to deal with the blizzard of government paperwork to get funds to feed low income students. All meals must be paid for by parents online in advance, so there is no wasted food, nor unpaid meal charges, both heavy drains on public school meal programs which try to ensure that no students go hungry.

All of those efficiencies and cost savings, as compared to a regular public school meal program, and yet still the food costs $5-7, even more than Alice Waters proposed; what’s more, she was describing a public school program, which would have all of those other expenses like labor and overhead, which this Jamie Oliver-approved program is able to avoid. In other words, the costs of operating a school lunch program with this level of food quality, in a regular public school setting, would be far higher than $5-7.

Meanwhile, Beverly Hills Unified School District in southern California, where lunch participation is up 40% this year, demonstrates that even serving a more traditional menu of conventional school lunch items can be pricey when lots of choices are offered.

The meal program is being run this year by Chartwells, one of the major players in school food, and frankly, the elementary menu is hardly something Alice Waters would approve, with its nachos, hot dogs, and “meaty-bean burritos,” but there are also kosher sandwiches or club salad available daily from Subway as part of the meal program, plus a fruit and salad bar.

The 4th-8th graders also have additional daily choices including pizza, burgers, and breaded chicken sandwiches, as well as changing daily specials which include corn dogs, chicken strips, and breaded fish sandwiches. High school students have an almost unbelievable quantity of choices including 2 daily paninis, 3 pizzas of the day, assorted pastas with sauces, 2 sandwiches of the day, a daily bowl (could be beef and broccoli, or maybe mac and cheese with chicken), and chef’s salad, fruit cups, yogurt parfaits…I know of restaurants with fewer choices!

Both students and teachers praise the high school lunch, with one teacher exclaiming “It’s like real food!”

But all of this choice comes at a price, and in Beverly Hills that price is $4.50 for elementary students and $5.75 for high school. Right up there in Alice Waters territory, and the food doesn’t even pretend to be organic, and is likely not all locally sourced and cooked, either. But for the 94% of BHUSD’s students who do not qualify for free or reduced price meals, high prices are no object even if the food isn’t Alice Waters pure.

There are other schools offering fabulous, farm fresh, scratch cooked “real food” to their students – but always at a “real” price. In Santa Cruz (CA) a private 6-12 school offers kale salad, pumpkin curry soup and spanakopita, all prepared by trained chefs in the school’s own kitchen. The price: $6.25.

The media regularly offer up tales of a school meal company claiming to offer scratch cooked meals using local and organic food that kids love, and gullible reporters may be led to believe that the “miracle” food is being produced for the same amount of money as the federal government pays for a free lunch. But as I have previously explained, the cost of the food gobbles up the entire amount of the government reimbursement, leaving the school to have to figure out a way to pay for the overhead costs of the cafeteria (like electricity), and the cost of labor to serve the food and clean up after, and plow through the mountain of paperwork required to get that reimbursement.

One widely read article last year about a scratch cooking meal program in a private school in Chicago even used the term “miracle chef” in the headline, and provoked some justifiable cynicism among those of us who have worked on this issue for years.

Today, October 24th, 2011, is the first annual Food Day, a day of action organized by the Center for Science in the Public Interest and supported by a broad base of anti-hunger advocates, physicians, nutritionists, authors, politicians – a veritable Who’s Who of folks active in the better food movement. The goal of Food Day is ambitious; according to their website:

Food Day’s goal is nothing less than to transform the American diet—to inspire a broad movement involving people from every corner of our land who want healthy, affordable food produced in a sustainable, humane way. In other words, we want America to eat real.

“Eating real” is what Alice Waters wanted for America’s schoolchildren too, and now, two years after America was shocked by her original estimate of $5 to cover the cost of “real” food, it is becoming more and more clear that she might have actually low-balled the expense.

Food Day is a time to think about how we can all get more “real” food and less processed, packaged, and GMO food into our diets, and that includes the diets of the approximately 50 million students in our K-12 public schools.

I hope the media will keep the focus on this topic and highlight real solutions that can work in any school. But “miracle chefs” and local organic meals for the same cost as typical processed school food? Get real!