The Presidential Race Comes to Richmond 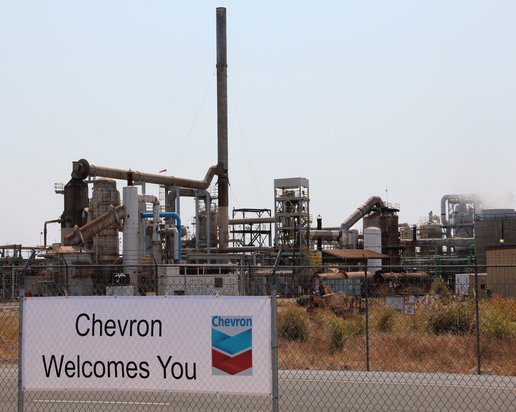 Residents of Richmond and other California refinery towns have learned, over time, to be wary of state and local officials too closely tied to companies like Chevron.

Politicians who benefit from “independent expenditures” on their behalf or direct campaign donations from oil producers or, their lobbying group, the Western States Petroleum Association (WSPA) tend to be less enthusiastic about protecting the environment by reducing fossil fuel dependence.

In Sacramento, for example, Governor Jerry Brown and state Senate President Kevin de Leon were unable to pass legislation last year that would have reduced greenhouse gas omissions by cutting car and truck petroleum use in half over the next 15 years.

During the debate about this measure, Chevron doled out $235,000 in new campaign donations to key Assembly members, mainly Democrats. That corporate spending, plus a $10 million advertising campaign and $1.5 million paid to various lobbyists in Sacramento, helped derail the legislation in the State Assembly (after it was approved in the Senate).

As the Sacramento Bee noted, afterwards, “the oil industry and its lobbyists and consultants outmaneuvered and outmuscled the governor, Democratic leaders, and environmentalists.”  With global warming about to “consume us if we don’t overcome our carbon dependence,” how long, the Bee asked, “will this blue state let oil remain king?”

This is a good question to ask again as voters in our blue state start casting  ballots in the Democratic presidential primary that culminates on June 7. The two candidates competing for national Democratic convention delegates are, of course, Hillary Clinton and Bernie Sanders. Nationally and in the Bay Area, their relationship to Big Oil has been quite different.

During a California visit two years ago, Sanders spoke out against Chevron’s political spending, locally and nationally. Clinton, in contrast, has benefitted from past or present investing in her campaigns by Chevron-connected influence seekers. Like the Atlanta-based family foundation of former UN Ambassador Andy Young, (See http://beyondchron.org/andrew-young-richmond-prophet-urban-renewal-big-oils-reverend-rent/ ), the foundation run by the former Secretary of State, her husband, and daughter has also received large grants from the company (as part of the $2 billion it has raked in from global corporations and foreign governments).

In October, 2014, Sanders made his stance on big money in politics very clear at a “town hall” meeting in Richmond, attended by 500 people. There, he endorsed candidates for mayor and city council that Chevron was spending $3.1 million to defeat. He denounced corporate domination of U.S. politics in general and accused Chevron of trying to prevent working class people, people of color and younger voters from having an effective voice in local government.

Clinton’s ties to Chevron go back further and are much friendlier. As the Washington Post reported in 2007, Bill and Hillary Clinton, now worth about $110 million, had “significant investments” in oil companies, including Chevron, before they shifted assets from stocks to cash to fend off conflict of interest accusations during Hillary’s first presidential campaign.

During that 2008 primary fight against Barack Obama, Laurence Humphries, a Chevron corporate strategist, became one of Clinton’s top fundraising “bundlers.” He raised more than $100,000, according to Public Citizen, a Washington, D.C. watchdog group. In her current campaign, just by the end of April, Greenpeace estimates that Clinton collected more than $2,600,000 in direct and bundled contributions from fossil fuel industry lobbyists. (For details, see: http://www.greenpeace.org/usa/campaign-updates/fossil-fuel-lobbyists-contributions-to-the-clinton-campaign/)

Among her maxed out (at $2,700 a piece) Democratic primary donors are Chevron lobbyists Jonathan Mantz and John Raffaelli, plus two Chevron lawyer-lobbyists from the Washington, D.C. firm, Akin Gump—Scott Parven and Brian Pomper—who have, together, bundled about $54,000 for her.

To no avail, the environmental group, 350.org, has demanded that Clinton reject both fossil fuel funding of her campaign and the Clinton Foundation, a cause also embraced by Naomi Klein, who views  “Clinton entanglements with the corporate world” as being “incredibly toxic at this climate-countdown moment.”

Further documentation of those “entanglements” was provided by Sarah Westwood, in the Washington Examiner last month. Westwood links Chevron’s 2008 campaign assistance to Clinton, its donations to her foundation, and a $5 million State Department-solicited contribution to the cost of building a World’s Fair pavilion in China to the company’s simultaneous lobbying of the State Department on trade issues, overseas fracking rights, and a lawsuit by residents of Ecuador’s oil-scarred rainforest.

In the Jarndyce v. Jarndyce of global environmental litigation, those villagers have been pursuing a class action case against Chevron for fourteen years (over damage caused by Texaco, a company it acquired). The plaintiffs won a monetary award—later reduced to $9.5 billion—that’s being contested on the grounds that it was fraudulently obtained through judicial misconduct. Chevron’s San Ramon-based CEO John Watson personally discussed the case with Secretary of State Clinton during a 2012 dinner honoring the prime minister of Japan. Watson reportedly sought greater U.S. pressure on the Ecuadoran government to distance itself from the damage award, including letting President Rafael Correa know that his anti-Chevron stance could “jeopardize trade preferences.”

Chevron’s history of social irresponsibility and political influence buying reveals much about the policy outcomes it could obtain with an old friend in the White House. We’ve already seen the results of that kind of industry clout with some Democrats in Sacramento: even modest efforts to slow global warming have been thwarted in a supposed “blue state” leader in the field.

(Steve Early is a Richmond resident, member of its Progressive Alliance, and the author of a forthcoming Beacon Press book about the city called Refinery Town: Big Oil, Big Money, and the Remaking of an American City.)