The Politics of Homelessness and the “Quality” of Urban Life 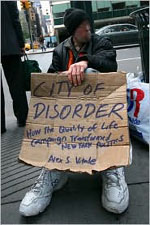 Despite nearly three decades of widespread visible homelessness in America, the traditional media–as San Francisco Chronicle readers well know–remains a fount of misinformation in assessing causes and solutions. This makes the release of Alex Vitale’s City of Disorder particularly timely. Vitale worked for the San Francisco Coalition on Homelessness in the early 1990’s, and is now a Professor of Sociology at Brooklyn College. His book is the most balanced analysis yet produced of the origins, and political impacts, of the backlash against public camping, sidewalk drinking, panhandling, “squeegee men,” illegal peddling and other “quality of life” issues. Although Vitale focuses on New York City, his analysis also helps explain San Francisco politics. While he agrees that homelessness is a product of decades of inadequate federal spending on low-cost housing, he make a convincing case that “urban liberalism”–embodied in policies adopted by such liberal mayors like David Dinkins and Willie Brown–has contributed to rising homelessnes and its link to public disorder.

Alex Vitale accomplishes some very important goals in his new book, City of Disorder. First, he shows how the term “quality of life” began as part of Lyndon Johnson’s War on Poverty, with the President vowing to improve life in low-income minority communities.

But as the nation abandoned its short-lived commitment to upgrade living conditions in the ghetto, the very meaning of government actions toward “quality of life” problems became redefined. By 1970, the Nixon Administration had steered the term away from helping disadvantaged communities and toward a non-economic, environmental focus which now included smog and other problems negatively impacting our “quality of life.”

By the mid-1980’s, New York City Mayor Ed Koch used the term “quality of life” to justify increased police and broader enforcement efforts. An agenda originally targeted at uplifting the nation’s poor became a buzzword for addressing the daily problems of transit, crime, and pollution affecting the urban middle-class.

Mayor David Dinkins tried to reframe the “quality of life” focus on the disadvantaged when he took office in 1990, but was defeated for re-election by Rudy Giuliani in 1993. Giuliani’s platform defined ““quality of life” as protecting the middle-class and business community from the homeless and poor people that the War on Poverty’s “quality of life” terminology was designed to assist.

So as Vitale shows, neoconservatives won the “framing” battle over the politically laden “quality of life” terminology.

As applied by Giuliani, this meant that the type of low-level crime that police focusing on violent felonies once tolerated–squeegee men, camping in parks, public intoxication, graffiti, panhandling etc–became priorities. And contrary to the widespread view that Giuliani initiated this shift in police enforcement, Vitale shows that it was neighborhood pressure on the Dinkins Administration that initiated this policy change a year prior to the 1993 election..

The “broken windows” theory became the justification for the criminalization of homelessness. And as Vitale importantly notes, it was urban liberals like Dinkins who first implemented this neo-conservative approach to addressing poverty and homelessness.

Urban Liberalism and the Rise of Disorder

Vitale’s chief argument in City of Disorder is that urban liberals bear a greater degree of responsibility for ongoing homelessness than is typically recognized. This is a bold and risky charge, as it can be interpreted to blame liberal mayors for a problem created by federal housing cuts. These began under Nixon and Reagan, and were then sustained under Bill Clinton’s paltry housing budgets before regressing further under George W. Bush.

As someone who strongly believes that homelessness is a function of inadequate federal housing assistance, and who has authored a book making this claim (Reclaiming America, UC Press, 1999), I read Vitale’s assessment of the complicity of urban mayors with great interest. And while I think he should have made it clearer that federal policy is still the main culprit (a point he repeats but not emphatically enough), his argument about New York City is hard to dispute.

Understand that we are not talking about subsidizing market-rate development in the burned out South Bronx of the 1970’s, or as a necessary incentive to improve abandoned communities. These subsidies were available citywide, and not only raised land costs that drove up housing costs and expedited gentrification, but the hundreds of millions of dollars lost through tax abatements and other goodies to developers meant these funds were not available for reducing homelessness.

Vitale makes a powerful, and likely irrefutable, case that New York City mayors could have made major inroads in reducing homelessness had they adopted more progressive land use policies. This part of the book alone is a major contribution to the ongoing debate about homelessness.

What can we glean from Vitale’s analysis about San Francisco and other bastions of “urban liberalism”?

Under Mayor Dianne Feinstein, San Francisco squandered hundreds of millions of dollars on temporary “solutions” without making any permanent investment in reducing homelessness. The Feinstein years also saw pro-gentrification policies that made housing much less affordable and drove up the homeless population.

In 1988, Mayor Art Agnos created a homeless policy focused on permanent solutions, but fell prey to what Vitale describes as the “community backlash” against pervasive quality of life violations in public spaces. Whereas many Agnos supporters despaired at his refusal to crackdown on camping in Civic Center Park prior to it bringing down his mayoralty, Dinkins began aggressive quality of life enforcement a year before the 1993 election but could not withstand Giuliani’s attacks on him over the issue.

(While Vitale accepts that Giuliani prevailed in his rematch with Dinkins due to qualify of life issues, I note in The Activist’s Handbook that had Dinkins maintained his 1989 opposition to the construction of an incinerator at the Brooklyn Navy Yard, he likely would have won re-election in 1993 despite Giuliani’s framing of the campaign)

Has Newsom’s creation of over 2500 units of housing for the homeless limited the backlash against the presence of poor people in San Francisco’s public spaces? His easy re-election would appear to say yes, though the mayor clearly feels pressure to reduce the problem’s scope.

Since few cities in the United States can generate the level of public money to build affordable housing as New York City and to a lesser degree San Francisco, Vitale’s analysis applies best to the city that he has focused upon. But readers across the nation will benefit from what is now clearly one of the best books ever written about urban homelessness.