The Perpetuation of Racial Bias in Our “Post-Racism” Age 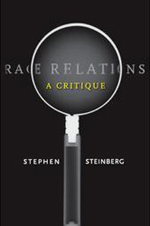 After reading Stephen Steinberg’s Turning Back: The Retreat from Racial Justice in American Thought and Policy (Beacon, 1995), I could not understand why he was not more famous. After all, Steinberg’s book so discredited the empirical basis of William Julius Wilson’s prominent work, The Declining Significance of Race, that Wilson publicly conceded his faulty analysis. But after reading Steinberg’s new book, Race Relations: A Critique, his lack of prominence is understandable. Steinberg insists on exposing the hypocrisy, careerism and outright dishonesty of much of the field of sociology, and identifies the individual and organizational offenders. Arguing that sociology has long provided “legitimacy for a racist order,” Steinberg shows how politicians like Bill Clinton touted questionable studies arguing that the African-American community needed only class, rather than race, based solutions. Steinberg’s discussion of ongoing racial injustice may not be popular in today’s allegedly “post racism” era, but he has again written a “must read” book for our time.

In a book of only 147 pages, Stephen Steinberg explained how an academic, foundation, and political “infrastructure” promotes a “racism is not the problem” agenda while urging exclusively class-based solutions to the crisis in the black community.

Steinberg begins by showing how the academic discipline of sociology has long relied on a “race relations” model that ignored—even in the worst days of Jim Crow laws—the racial oppression of African-Americans. He does this in the most entertaining fashion, describing how academics fit their theories of race so as to reaffirm a racist status quo backed by wealthy donors to foundations and influential schools like the University of Chicago.

Steinberg then shows the contemporary relevance of this pattern of building prominent sociology careers by legitimizing racial oppression in the skyrocketing career of William Julius Wilson. Wilson may be America’s best known sociologist, a fame entirely derived from a book— The Declining Significance of Race—whose message that blacks were victims of class rather than race bias warmed the hearts of affirmative action opponents and others uncomfortable with race-based solutions.

One of Wilson’s greatest champions was former President Bill Clinton. Those still romanticizing over the Clinton years should read Steinberg’s account of the President’s 1997 race initiative. Described as a National Conversation on Race, the initiative ignored the continuation of institutionalized racial oppression against blacks, and instead preached “dialogue” to foster racial harmony.

Steinberg points out that the Kerner Commission report issued after the riots of the 1960’s acknowledged institutional racism and called for economic development and assistance to low-income black communities. Thirty years later, President Clinton presided over a report that stressed tolerance and understanding, ignoring the institutional forces—such as racial bias in lending, racial profiling by police etc—that continue to undermine African-American progress.

Steinberg discusses how the theories of Wilson and others are boosted because they provide cover for politicians like the Clintons who do not want to address such issues as affirmative action, school resegregation, and the hugely disproportionate presence of blacks in the criminal justice system (recall that President Clinton endorsed the racial double standard whereby crack cocaine users (disproportionately black) get long mandatory sentences while those ingesting the powdered form of cocaine (typically white and more affluent) get lighter penalties).

Steinberg notes that subsuming race to class served the interest of both the left and right. Much of the left prefers class-based solutions, and views racially-specific programs like affirmative action as dividing the working class.

Conservatives have long opposed measures to address racial injustice. And the removal of race-based measures from the political landscape has not led the right to support universal health care, increased education or housing spending, or a wide-range of other class-based solutions

In addition to setting the record straight about race, Steinberg also tackles ethnicity.

Remember the “Melting Pot”? This was the idea that immigrants came to the United States and were “melted and fused” into Americans. Prior to World War II, the notion that immigrants became fully assimilated into Americans was quite popular, with the maintaining of a distinct ethnicity a “relic of the past.”

But after World War II, the idea emerged that immigrants had not really assimilated. As Moynihan and Glazer’s “Beyond the Melting Pot” concluded, “the melting pot did not happen.”

But as Steinberg shows, this attempt to revive the notion of the “white ethnic” ignored the fact that, other than Native Americans and Chicanos, European immigrants had almost completely assimilated. He describes how “the grandchildren of immigrants had largely forsaken their ancestral language and culture, “ while 1990 Census data shows that only 20% of U.S. born white of immigrant background were married to spouses from the identical ethnic heritage.

Steinberg’s point is that the dominant view that assimilation did not happen and that unique ethnic identities are secure conceals the real and pervasive threats to constituencies seeking to preserve their traditional cultures. In other words, at the same time that the public is told that maintaining one’s Irish, French, German, Polish or Scottish identity is a good thing, there is a push across the United States to ban bilingual education, limit bilingual ballots, and to otherwise force immigrant groups (particularly Latinos from Mexico) to conform to the dominant culture.

Steinberg sees the sociology field as facilitating what he calls “wishful thinking” about assimilation. This phrase might have become the book title, as Steinberg conclusively shows how elite “wishes” for a racially just society have become a substitute for the concrete actions necessary to achieve this result.

Steinberg’s refusal to bend his analysis to the prevailing political and academic winds may not have helped his career, but it makes Race Relations a particularly valuable read. Let’s hope we will not have to wait another decade for his next book, for Steinberg’s voice cannot be heard too often.