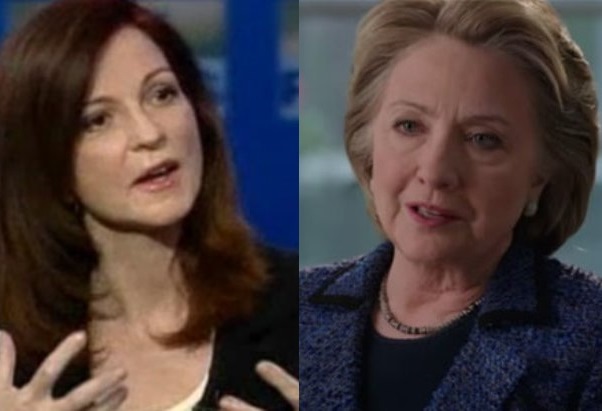 For more than twenty years, New York Times columnist Maureen Dowd has been attacking Hillary Clinton from a shallow well of insults, routinely portraying the former secretary of state and first lady as an unlikeable, power-hungry phony.

Media Matters analyzed 195 columns by Dowd since November 1993 containing significant mentions of Clinton for whether they included any of 16 negative tropes in five categories (listed in the below methodology). 72 percent (141 columns) were negative towards Clinton — only 8 percent (15 columns) were positive. The remaining 20 percent (39 columns) were neutral.

For example, Dowd has repeatedly accused Clinton of being an enemy to or betraying feminism (35 columns, 18 percent of those studied), power-hungry (51 columns, 26 percent), unlikeable (9 columns, 5 percent), or phony (34 columns, 17 percent). She’s also attacked the Clintons as a couple in 43 columns (22 percent), many of which included Dowd’s ham-handed attempts at psychoanalysis.

Dowd’s latest column discussed Clinton’s book tour for her new memoir Hard Choices. In a tortured comparison, Dowd compared Clinton to Elsa from the popular Disney movie Frozen. Dowd concluded, “Those close to them think that the queen of Hillaryland and the Snow Queen from Disney’s ‘Frozen’ have special magical powers, but worry about whether they can control those powers, show their humanity and stir real warmth in the public heart.”

Dowd described Clinton’s memoir as “a testament to caution and calculation,” an accusation she has lobbed at the former secretary state for decades. Dowd called Clinton “scarred and defensive” and asserted that she lives in an “ice palace.” The Frozen comparison is one of dozens of pop culture references Dowd has invoked in her writing about Clinton.

Dowd has stuck to this script for over two decades now, and shows no signs of letting go.

In 51 different columns – 26 percent of those reviewed for the study —  Dowd has pushed the theme that effectively everything Hillary Clinton has done is part of a Machiavellian plot to attain more power.

In a 1996 column discussing a Congressional Republican inquiry into the White House Travel Office as Clinton was promoting her book It Takes A Village, Dowd mused that the two events were conspiring to portray Clinton as “Earth Mother meet Mommie Dearest.” She again called Clinton “Mommie Dearest” in a 2008 column while accusing her of trying “to give the kiddies nightmares” during the presidential campaign. (Mommie Dearest is a memoir by Christina Crawford detailing her relationship with her domineering, abusive adoptive mother, Joan Crawford.)

Dowd has called her a “controlling blonde,” and in 2004 wrote “nothing but a wooden stake would stop” Clinton’s plans to run for president in 2008. She has written that Clinton “moves like a shark” and accused her of having “relentless ambition” dating back to her 1969 commencement speech at Wellesley University.

When Clinton was in the Senate, Dowd described her as “a manly girl” who “has been so cautious and opportunistic about weighing in on everything from Schiavo to Alito and Iraq.”

In 2006 she wrote that Clinton had “been too busy triangulating and calculating to be good at articulating.”

Dating back to 1993, Dowd has suggested that Clinton is somehow betraying the feminist cause in 35 columns (18 percent of the columns studied).

In 1999, Dowd wrote that Clinton “was unmasked as a counterfeit feminist after she let her man step all over her.”

Dowd has repeatedly insisted that many of Clinton’s accomplishments — particularly winning her Senate seat in New York — came about largely based on her trading on the sympathy from slights by men.

When Clinton was serving in the Senate, Dowd described her as “once so angry about tea and cookies, [Clinton] is now so eerily glazed and good-natured that she could be the senator from Stepford.”

Dowd has sought to portray Hillary Clinton as unlikeable in 9 separate columns (5 percent of the columns studied). In 1999, Dowd speculated that Rudy Giuliani’s “briefing book on Clinton” might include things like: Clinton’s “smile is not connected to her face,” and that “you might admire her but you wouldn’t want to hang out with her.”

In 2008 she referred to “Alpha Hillary,” whose “abrasive and secretive management of health care doomed it,” and has written that Clinton was “paying a fortune to try to buy the secrets of likability.”

Dowd has often dismissed Hillary Clinton’s public image as a façade, repeatedly doubting the sincerity of her actions over the course of 34 columns touching on the subject (17 percent of the columns studied).

In 2008, Dowd attacked Clinton as “Sybil,” a reference to the 1976 film about a woman afflicted with multiple personality disorder:

In a column headlined, “Watch Out, Meryl Streep! She’s a Master Thespian,” published after the 2008 primaries, Dowd wrote that Clinton might be able to assist Obama in the campaign against John McCain because “I bet she is a very good actress.” She has also described Clinton as “shape-shifting” and “cynical.”

Despite Clinton having been in the spotlight for over fifteen years by the time this column was published, Dowd claimed in 2007 that “[t]he public still has no idea of what part of her is stage-managed and focus-grouped, and what part is legit. It’s pretty pathetic, at this stage of her career, that she has to wage a major offensive, by helicopter and Web testimonials, to make herself appear warm-blooded.”

In 43 columns since 1993, Maureen Dowd has savagely attacked nearly every aspect of the Clintons’ marriage and repeatedly lamented that they refuse to fade from the public arena. Her obsession with attacking the former first couple came up in 22 percent of all columns about the Clintons.

Dowd asserted in 1999 that “everyone is fed up with the creepy dynamics of this warped marriage” and accused the couple of having “chosen tactics over truth with such consistency that it’s impossible to accept anything they say.” In another column from that year she characterized the couple as “rootless and chaotic” and said, “They seem like a virus or alien that needs a host body to survive.” In 1998, she described their relationship as a “repugnant arrangement.”

She claimed that the “dysfunction and chaos” of the Clintons is what “fueled the Republican hate machine.”

Dowd once said, “The Clintons are ends-justify-the-means types with flexible boundaries about right and wrong.”

When Hillary Clinton ran for President, Dowd said, “As a possible first Madame President, Hillary is a flawed science experiment because you can’t take Bill out of the equation.” She accused the Clintons of having a “weird codependent” marriage, and said they had created a “transcendentally wacky standard for political unions.”

Dowd’s comparison of Clinton to Elsa from Frozen in her latest column is nothing new for the columnist. She has repeatedly compared Clinton to various figures from pop culture, including Godzilla, the 50 Foot Woman and Wile E. Coyote.

Since 1993, Dowd has compared Clinton to nearly 40 different figures and works from Hollywood, TV, and popular books throughout at least 40 different columns.

Some of Dowd’s pop culture comparisons reflect positively on Clinton; in one 2007 column, Dowd referred to then-presidential candidate Clinton as “Wonder Woman,” and in another 2000 column, she described Clinton as potentially “Unbreakable,” a reference to the film released that year about a man who cannot be injured.

The majority of the comparisons, however, reflect Dowd’s frequent attacks on Clinton as unstable, fake, and potentially dangerous. She has called Clinton “the senator from Stepford,” quoted an anonymous aide calling her “The Terminator,” and claimed that unnamed Republicans were casting Clinton as “a she-monster melding images of Medea, the Furies, harpies, a knife-wielding Glenn Close in ‘Fatal Attraction’ and a snarling Scarlett Johansson in ‘Match Point.””

A review of Dowd’s cultural references include comparing Clinton, and sometimes her husband, to an array of contradictory figures:

– Wile E. Coyote, because “something is always blowing up.”

– Sister Sarah Brown, the mission leader from the musical “Guys and Dolls”

– “Lucy and Ricky,” the stars of I Love Lucy

– Cate Blanchett in the movie Elizabeth, “when the vibrant young woman, feeling she must desexualize herself to rule, chops off her long hair, covers her skin with white pancake makeup and assumes the grim visage of the Virgin Queen.”

– Marlo Thomas in the 1960’s sitcom That Girl, in which a young actress tries to succeed in New York City

– The Flying Dutchman, a fictional ghost ship that is doomed to sail forever

– Kathleen Turner and Jack Nicholson in Prizzi’s Honor, a film in which married mobsters turn on each other

– Guy Pearce in Memento, a film about a man with severe memory loss

– Tess Harding, Katharine Hepburn’s character in Woman of the Year

– Shakespeare’s Taming of the Shrew

– “Desperate Housewives” and “The West Wing”

– Scarlett O’Hara in Gone With The Wind

– Dorothy in The Wizard of Oz

– Eve Harrington, a character in All About Eve who maneuvers herself into the lives of powerful people to further her own career

– The Lady Vanishes, an Alfred Hitchcock thriller in which an elderly woman mysteriously disappears on a train

Media Matters used the Nexis database to search The New York Times archives for “hillary and clinton and BYLINE(Maureen Dowd) and Editorial Desk.” We also used the Times website to identify Dowd pieces that mentioned Clinton from the Week In Review and Magazine sections prior to Dowd’s 1995 move to the editorial desk. We reviewed those columns, coding ones that included any substantive discussion of Hillary Clinton for whether Dowd invoked any of 16 negative tropes in five categories.

o    Hillary has a bunker mentality, will not listen to detractors

Betrayed Feminism And Played The Victim

o    Hillary is bad for feminism

o    Hillary traded on slights from men to get ahead

People don’t like her, she’s not a nice person

o    Hillary is not likeable

o    Hillary is cold and unemotional

o    Hillary doesn’t know who she is

o    Hillary has no ‘real’ identity

o    Hillary is scripted and prepackaged and poll-driven

Targeting The Clintons As A Couple

o    The Clintons won’t go away, even though everyone wants them to

o    Their marriage is a sham, a trade of power for more power