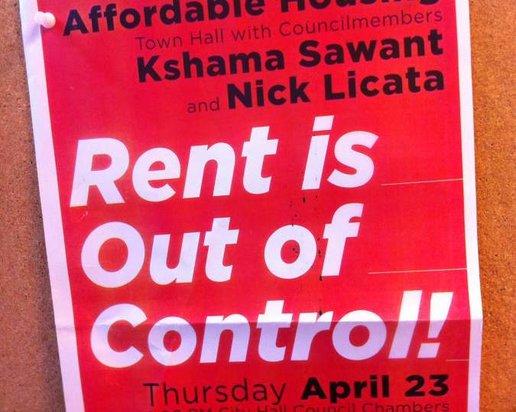 On November 4, a near riot broke out in the usually quiet city of Alameda, California The reason? A battle over rent control. Rising rents and evictions are causing tenant displacement and activists hoped that the November 4 City Council meeting would bring some relief. Instead, the meeting broke out in violence, with a city official assaulting  a tenant activist and the police arresting two tenants for the “crime” of advocating for rent control.

Alameda is the latest battleground in the new rent control wars. Earlier this year the city of Richmond, California enacted a rent control and just cause eviction law, only to have landlords get it suspended by qualifying a referendum. Instead of waiting for the election on the referendum Richmond activists are now gathering signatures to put their own measure on the November 2016 ballot.

Activists in cities that have long had rent control laws are pushing for stronger measures. In Los Angeles, activists like Larry Gross, Director of the Coalition for Economic Survival, want the city to stop allowing tenants to be evicted so that speculators can demolish their rent-controlled buildings (emptying the building through the Ellis Act, a state law that preempts local just cause eviction laws). CES and their allies forced the head of the California Housing Finance Agency to resign over his Ellis Act eviction of tenants.

San Francisco has been strengthening its rent control laws through ballot measures and legislation for three decades. The city recently enacted an Eviction 2.0 package to further protect tenants.

The spread of rent control campaigns goes beyond California.

In Seattle, sharply rising rents and tenant displacement led Councilmembers Kswama Sawant and Nick Licata to push for a Council resolution repealing of the statewide ban on rent control. On September 21, Seattle’s City Council backed the resolution calling for repealing the state preemption of local rent control enacted in 1981.

Portland tenants are also pushing for rent control. According to the Oregonian, “During the third quarter of 2015, Portland saw 15.4 percent rent hikes and 3.2 percent vacancy levels.”

After declaring a “Renters State of Emergency,” tenants got the Portland City Council to vote unanimously on October 14 to require landlords to give 90 days’ written notice to tenants when raising rents by 5 percent or more, or when evicting residents without cause. As with Seattle, Portland’s ability to enact real rent control is preempted by an outdated state law whose claim that rent control would “disrupt an orderly housing market” reminds one of Republican claims that Obamacare would make the health care crisis worse.

The Growing Need for Rent Control

Long associated with New York City, rent control moved west in the 1970’s. The precipitating force in California was the 1978 campaign for Prop 13 in which landlords pledged to return their property tax savings to tenants if the initiative passed. But that did not happen. This led Berkeley, San Francisco and other cities to put measures on the November 1978 ballot to require landlords to return their Prop 13 savings. The results were mixed, but a new tenants movement was born.

These post-Prop 13 campaigns coincided with two other significant developments for the California rent control movement.

I got my own start in tenant activism with Berkeley’s 1978 Prop I, which required landlords to return 80% of their Prop 13 savings to tenants. Its victory that November was soon followed by Berkeley voters approving a strong rent control and eviction law. San Francisco, West Hollywood, Santa Monica, East Palo Alto, Los Angeles and Oakland also passed rent control laws of varying strength.

Real estate interests responded to these local rent control victories with a sustained campaign to get the state legislature to preempt city laws that restricted rent increases on vacant apartments (known as vacancy control). They finally prevailed in 1995.  Although California now prohibits price restrictions on vacant units, rent control and just cause eviction laws continue to protect tenants in place.

Recent stories from the front lines of urban America highlight skyrocketing rents, artist evictions, and the transformation of affordable neighborhoods into upscale enclaves. We hear this from New York City to San Francisco, and from at risk neighborhoods in Los Angeles, Chicago, Washington DC, Seattle and elsewhere. A review in the current Book Forum refers to the “inexorable creep of gentrification.”

But as I argue in my new book on San Francisco’s still primarily low-income Tenderloin neighborhood, The Tenderloin: Sex, Crime and Resistance in the Heart of San Francisco, the displacement of tenants and the transformation of neighborhoods into upscale enclaves is not “inevitable.” Stopping or slowing these trends require the passage of strong land use protections, starting with rent control and just cause eviction laws.

My book emphasizes several strategies neighborhoods should adopt to protect their affordability. But the basic tenant protections of rent control and just cause eviction are typically a prerequisite. It’s very difficult to stop displacement absent such tenant protections.

That’s why rent control wars have broken out even in cities like Alameda and Fresno not known for tenant activism. And as long as nation’s housing crisis continues,  even more cities will be pushed to either enact rent control and just cause eviction ordinances or to strengthen existing laws.

Ultimately, the biggest challenge for rent control campaigns is the organized political opposition of the real estate industry. It’s more than the huge dollars contributed to politicians; the large landlord turnout to the November 4 Alameda City Council meeting (the Council adopted a 65-day moratorium on rent increases and evictions and is considering limiting annual rent increases to 8%)   shows that rent control opponents are also organized on the ground.

In nearly every rent control city in California, strong rent control and eviction protections required voter approval. Since legislative passage is inevitably followed by a landlord referendum, it is a better strategy for tenant activists to just go the ballot directly with a measure they have written (rather than defend a measure in a referendum that was weakened by legislative compromises).

Tenants Together, a California tenants organization founded and headed by Dean Preston, has helped local groups like the Alameda Renters Coalition and the Richmond Progressive Alliance push for rent control. Its rent control toolkit and legislative expertise has made a huge difference in reigniting California’s rent control wars.

Throughout urban America, rising rents and evictions have left even middle class tenants fearing displacement. Rent control and eviction laws don’t solve all the affordability and tenant protection problems, but they make a tremendous difference. This is true even though they cannot limit rent hikes on vacant apartments, and may only slow rather than halt the tide of neighborhood gentrification.

In the absence of massive new federal funding for affordable housing, rent control and just cause eviction laws are the most potent tools for protecting  economically diverse neighborhoods in urban America. The return of the rent control wars shows that many communities are working harder than ever to accomplish this.

Randy Shaw is Editor of Beyond Chron and  Director of San Francisco’s Tenderloin Housing Clinic. He is the author of five books, including The Tenderloin: Sex, Crime and Resistance in the Heart of San Francisco