The Minimum Wage Loophole That’s Screwing Over Waiters and Waitresses 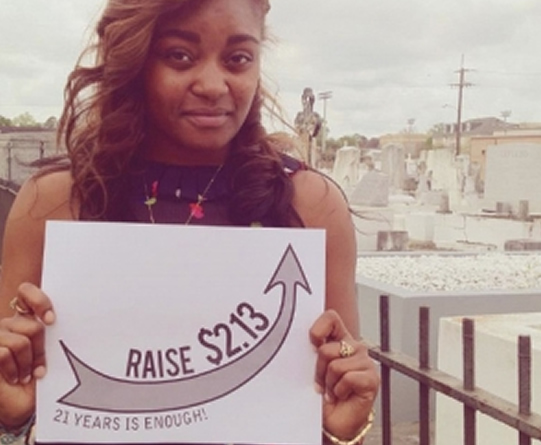 As Republicans stonewall President Obama’s initiative to raise the federal minimum wage from $7.25 an hour to $10.10 an hour by 2016, some state lawmakers have taken the matter into their own hands, passing legislation that increases the salaries for America’s most vulnerable workers. But there’s one group that is still largely left out of the minimum wage battle: people who work for tips.

The Minimum Wage Fairness Act, which Obama endorsed, would have gradually raised tipped workers’ minimum wage to 70 percent of the regular minimum wage. But the bill has faced steep opposition from Republicans and the restaurant lobby. According to Open Secrets, the National Restaurant Association, which opposed the minimum-wage hike, spent more than $2.2 million on lobbying last year.

Like millions of Americans across the United States, 23-year-old Anna Hovland worked a waitressing job earlier this year to make ends meet. Her restaurant in Washington, DC, paid her the local minimum wage for tipped workers, $2.77 an hour, which meant that after taxes, her paycheck was usually zero. Her tips, never dependable, ranged from $20 to $200 a shift. “In a city as expensive as DC, I’ve been able to make ends meet by the skin of my teeth,” Hovland says. “Sometimes it will only be in the last week or two of a month that I’ll realize I’ve made enough to pay all my bills.”

In December, Washington’s city council voted to raise the city’s minimum wage from $8.50 to $11.50 an hour by 2016. But the bill didn’t raise the minimum wage for tipped workers, like Hovland, on the basis that restaurants in Washington are supposed to make up the difference if tips don’t meet the equivalent of $11.50 an hour. That’s how the federal law works, as well. US companies are allowed to pay tipped employees pittance because customers are expected to tip well enough tosurpass at least the federal minimum wage of $7.25, and, if they don’t, companies have to chip in the rest.

But that’s not how things always work in the real world. “The servers who make ‘good money’ are in the minority,” says Maria Myotte, a spokesperson for Restaurant Opportunities Center United, which aims to improve conditions for workers in the industry. She notes that tipped workers are hit especially hard by “wage theft,” whereby restaurants don’t make up the difference when the tips aren’t rolling in. Between 2010 and 2012, the Wage and Hour Division of the Department of Labor conducted nearly 9,000 investigations in the restaurant industry, and discovered that83.8 percent had some kind of wage and hour violation.

Hovland tells Mother Jones that before she got in touch with the Restaurant Opportunities Center last fall—to find out why she was getting zero-dollar paychecks—she had no idea that her employer was supposed to make up the difference in tips. “We never logged our tips or reported them to our employers,” she says, unless they were on credit cards. She adds, “Even after I shared information about the minimum wage difference with coworkers, nobody felt comfortable asking employers about it.”