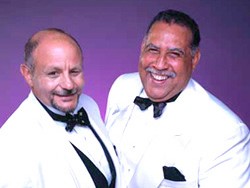 I’ve been in the Entertainment Business for more years that I care to mention. As a Disc Jockey in Chicago, Gary Indiana, San Francisco (Radio, TV) I played many, many Mills Brothers songs. Now the Mills Brothers are still going strong on stages around the World. And guess where they will be on April 30? – At the Rrazz Room. Donald Mills was the last of the Brothers, but the talent goes on with family members.

Their original hits “St. Louis Blues” and “Bugle Call Rag” were some of the Mills Brothers early hits. In 1943 they sent the airwaves into a tizzy with “Paper Doll” – a wonderful sweet ballad that became a huge hit. And who could forget the ever-new sounding “You’ll Always Hurt the One You Love.” And – ain’t that the truth?

Ask anyone – or most anyone — what they think of the Mills Brothers, and they will say that they surely are one of the greatest, influential jazz vocal groups of all time. They are particularly amazing on songs like “You’re Nobody Till Somebody Loves You” and “Bye Bye Blackbird.” The Brothers said: “Those ARE really great songs and we might do some of them at the Rrazz Room – but we haven’t really decided on the final set for the show yet.” Hey, maybe they’ll even toss in “Lazy River”.

The Mills Brothers history goes back at least 50 years. There has been a movie about them (The Mills Brothers Story) it’s available on DVD. Get ready – cause a performance by the “Mills” is totally engrossing. The ‘Brothers’ recorded mostly on Decca Records, where I met them when I did PR for Decca Records. They were moved to “Dot” records – and had the big hit “Get A Job” – a song that had a lot of doo-wop sounds in it. We are amazingly lucky that the younger generation (John Mills, the second) is continuing to bring this great music to the world. With him on the stage is Elmer Hooper of the famed ‘Platters’. Can’t wait to hear these great talents in person again.

Saturday in Healdsburg’s Rec Park will be ‘One Voice’ an afternoon of Vocal Jazz with wonderful and well-known talents. They are Madeline Eastman, Linda Tillery, Kenny Washington, Bobbe Norris, Jackie Ryan Ed Reed, Rhonda Benin and others. All this and this: George Cables, Larry Dunlap, Tammy Hall (Pianists) and rum maestro Billy Hart. Sunday the 5th – you’ll really get some great jazz with Pete Escovedo and Cuban trumpet star Arturo Sandoval. There is a tremendous roster of Talent at the Festival. But, not room to mention them all. Check out their website for more info: http://www.healdsburgjazzfestival.org/

ARTSHIP RETURNS with “stories…” at NOH Space May 25 – June 5

STORIES is a performance with narration and music. Performers include Daniel Boord, Zia Burchert, David Grayson-Dickey, and Ali Tahbaz. The riveting show intrigues with Telling, Singing, Playing and Giving Voice to original or retold short stories. Box office: 415-621-7928 or http://www.brownpapertickets.com/

NCTC HAS A PREMIERE MUSICAL COMEDY ON TAP

Here’s a taste: Three lady church organists have formed a singing group called “The Stops”. The ladies are on a one-night only tour in order to give a benefit concert for their mentor, a church music director and songwriter, who has been recently been ousted from his position because of his sexuality. The music and lyrics are by Eric Lane Barnes. Book by Barnes and Drew Emery. Directed by the fantastic F. Allen Sawyer. Musical Genius G. Scott Lacy will be fingering the piano and Stephanie Temple puts her special touch on the Choreography. At the New Conservatory Theatre. http://www.nctcsf.org/

Buzzin gets around … we’re talking Independent film at “Cannes Film Festival” for the Indies. Highlight … of the Fest is Bertrand Tavernier’s “The Princess of Montpensier. It’s a lush historical drama and a very grand affair. You’re gonna love the period costumes. The film is based on the novella by Madame de Lafayette and is set in the sixteenth century. Just in time for another princess in England who is getting married. Love the royalty – don’t you?

This wonderful Rollicking show will feature (I should say Star) on The Marines Memorial Stage. There is a huge cast – here a few: There is “The B.o.o.b.s!” – A trio of voluptuous Dames who are really Jessica Coker, Leanne Borghesi & Soila Hughes. Then there is LA’CHIC – a Motown Diva Trio. Lisa Vroman of Phantom Fame is “The Broadway Diva” – you have heard her in “Phantom of the Opera” many times. Carly Ozard will be on stage with an Oscar caliber performance. Ozard will also be at the RrazzRoom on May 13. During the Diva and Dames show you will get to enjoy Idol Winner La Toya London, Sharon McNight, Matthew Martin and many others. As I mentioned in last weeks column this show is packed with talent. And it’s all for Charity – THE RICHMOND/ERMET AIDS FOUNDATION (REAF). Get your tix fast – at 415-931-2515 or http://www.ken@richmondermet.org/