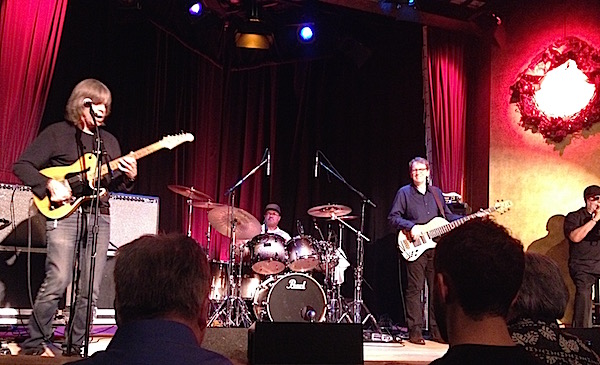 “One of the most esteemed electric guitarists of his generation, Mike Stern has distinguished himself over a four-decade career that has encompassed musical partnerships with Blood, Sweat & Tears, Billy Cobham, Miles Davis, Jaco Pastorius, the Brecker Brothers and Joe Henderson, as well as 16 recordings as a leader (six of which were nominated for GRAMMY® Awards). An electrifying soloist whose blistering chops combine rock-fusion firepower with sophisticated jazz harmonies and his inherently bluesy string bending prowess, Stern has the ability to instantly elevate the proceedings on any gig or session he plays by channeling the spirits of his own personal guitar heroes Jimi Hendrix, Wes Montgomery, Jim Hall and Albert King…”

Stern’s two night stint at Yoshi’s (beginning with last night’s sold out show), kicked off with a stellar band in tow; 5 string bassist Tom Kennedy, legendary trumpeter Randy Brecker and drummer Dennis Chambers, back in fine form after being sidelined by an illness that had kept him off the road for some time. I’m am happy to report that Chambers is indeed back, with a vengeance.

Speaking to Stern before the show, he recalled finding a prone Chambers in his hotel room during their tour in Spain, rushing him to the hospital in what had to be considered a life threatening situation. Stern was clearly elated that his friend survived, fully recovered, and able to return to the music they both love. In a recent interview, Chambers noted that Stern certainly saved his life.

Stern and his group tore through a repertoire of sizzling jazz and fiery blues; His original compositions like “Out of the Blue”, and “Avenue B” had the audience in a frenzy after the first 10 minutes. Kennedy’s bass solos were inventive, funky and fantastic; Brecker (after a momentary loss of audio), reminded us why he is still one of the world’s greatest jazz trumpeters; and the aforementioned Chambers showed that he is still one of the world’s best drummers.