The Kathryn Keats Show Comes to the Throckmorton 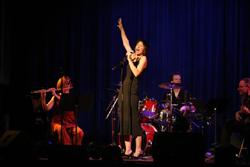 Singer, songwriter, producer and survivor, Kathryn Keats returns to Mill Valley’s Throckmorton Theater on December 17th, bringing another stellar ensemble of musicians and razor-sharp, impeccably crafted, soulful compositions, filled with entertaining and unpredictable moments and joy for every age. Keats is a fascinating and incredible entertainer that is reclaiming her career after 20 years in the witness protection program. She is currently developing a Broadway musical loosely based upon her book “After the Silence”. Her heroic journey from captivity to freedom has inspired audiences in Europe and the United States. Keats is often a guest artist at community outreach events that raise awareness about domestic violence. Joining Keats for this latest show are Michael Manring on bass, Jeff Oster on flugelhorn & trumpet, Celso Alberti on drums, Joe Venegoni on percussion and Kelly Park on piano & vibes.

Keats has been involved in music since the age of five, working as a teenager with such legends as Tennessee Ernie Ford, Loretta Lynn and Word Baker. She initially studied at the Cincinnati Conservatory of Music. Early in her career, she performed at Carnegie Hall and toured the country with a successful off Broadway show. Her studio work included national commercials and sound tracks and recording for various producers. Then… Keats was put into hiding after her former collaborator Ken Ford threatened her life. Law enforcement officials urged her to change her identity. Her name was legally changed after a harrowing experience with Ford culminated in a jury trial in Oakland, California. In order to protect herself, she was forced her to give up her career. All of her ties from her past were cut in 1989 after her last performance awarded her a Critic’s Circle award for best performance in the original stage version of The Rocky Horror Show.

When she could no longer work in the music industry she did not lament the loss of time. She began working behind the scenes, packaging feature films, creating and producing shows for television and film and directing several bands and artists. Her work included projects for Herb Ritts, Wayne Masur, and Mary Ellen Mark. When she had been to enough Herb Ritts birthday parties and met everyone the early 90’s required, she began creating, producing and packaging for television and radio.

Keats’s most impressive role was in taking on the persona of an industry executive, building strong industry relationships in Hollywood and New York while never disclosing her true identity.

On January 12, 2005, Keats discovered that the man who had threatened her life for over three decades had finally died. It was then that Keats could come out of hiding. Since then, she has reclaimed her past beginning to write again and record her music. She created a one woman show an to mark her return and has played The Knitting Factory LA, New York’s The Bitter End as well as The Plush Room in San Francisco. She has also made time to perform benefit shows for the victims of violence.

Along with Tony Valenziano of Smile Records, Keats recorded her first full length CD “After the Silence” in April 2007. Keats’s story is being developed as a feature film and was also featured in Readers Digest in ’07. Her ”After the Silence” toured in 2007, bringing not only her music, but also her amazing story to the public.

In short, Kathryn Keats is no ordinary animal. When most would be happy to finally live their life in peace Kathryn is driven to share her story and teach others how to save their lives, reclaim their dreams, and live again. Don’t miss a truly wonderful ensemble and a truly inspiring musician.