The Joe Zawinul Syndicate Comes to the Palace of Fine Arts 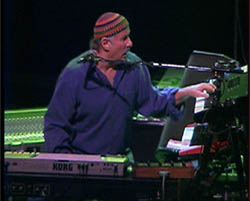 One of my all-time favorite jazz keyboardists, the truly legendary Joe Zawinul, comes to the Palace of Fine Arts on November 2nd. I’ve seen Zawinul many, many times, mostly with his co-leader and Miles Davis alum, saxophonist Wayne Shorter in Weather Report. Zawinul is a true visionary, who once compared jazz to boxing (“the footwork, the jab, the constant setting up and reacting to your opponent), and now at the tender age of 73, continues the good fight of plumbing the intersection of jazz, rock, and world music with his always-fresh Zawinul Syndicate.

Austrian born, Joe Zawinul emigrated to the US in 1959 where he played with Maynard Ferguson and the great Dinah Washington before joining alto saxophonist great Cannonball Adderley in 1961 for nine years. With Adderley, Zawinul wrote several important songs, primarily the slow and funky Hit “Mercy, Mercy, Mercy” which reached the top on the Billboard magazine Pop Charts in 1967.

Zawinul then moved on to a brief but fateful encounter and collaboration with Miles Davis, just at the time Miles was moving into the electric arena. It was Zawinul’s tune “In a Silent Way”, in fact, which served as the title track of Miles’ first electric foray, and Zawinul had a potent impact on Bitches Brew, as well. He is one of a bare handful of synthesizer players who actually learned how to play the instrument, to make it an expressive, swinging part of his arsenal. Prior to the invention of the portable synthesizer, Zawinul’s example helped bring the Wurlitzer and Fender-Rhodes electric pianos into the jazz mainstream.

After releasing his debut solo album on Atlantic in 1970, Zawinul and saxophonist Wayne Shorter put together what was to become the most important jazz group of the ‘70s and beyond, Weather Report. Drawing on the power and theatricality of rock and R&B, while maintaining allegiance to jazz and the pure spirit of improvisation, they tapped into the so-called “fusion” movement of that decade while carving out their own unique niche. Bandmembers came and went, including Miroslav Vitous, Airto Moriera, Alphonse Mouzon, Dom Um Romeo, Ndugu “Leon” Chancler, Alphonso Johnson, Jaco Pastorius, Narada Michael Walden, Alex Acuna, Manolo Badrena, Chester Thompson, and finally, Victor Bailey, Peter Erskine, and Omar Hakim, but the band spirit prevailed over the course of 17 albums, including the ground-breaking album Black Market and the massively popular Heavy Weather, with Zawinul’s infectious song “Birdland”. That song, in versions by Weather Report, Manhattan Transfer and Quincy Jones, won separate Grammy awards in three successive decades, and Weather Report itself won a Grammy for their momentous live album, 8:30.

In 1985, after he and Shorter finally agreed to go in separate musical directions, Zawinul continued to create adventurous new grooves in the group known as Weather Update and then the Zawinul Syndicate, whose albums have included the Grammy-nominated My People in 1996 and the two-CD, Grammy-nominated World Tour in 1998. Other special projects have included an adventurous solo album, Dialects (1986), and work as producer and arranger on Salif Keita’s landmark album, Amen (1991). Meanwhile, as another tributary of his creative life, Zawinul has also pursued classical composition, writing his ambitious “Stories of the Danube” in 1993 and working with renowned classical pianist Friedrich Gulda. His special solo project, “Mauthausen” released in Europe in 2000, is a memorial for the victims of the Holocaust, and was performed on the site of the Austrian concentration camp it is named after.

Among his prizes and awards, Zawinul has won the “best keyboardist” in Down Beat 28 times. Weather Report was a perennial winner in the “Best Band” category in Down Beat, Swing Journal and other magazines around the world. He has honorary doctorates from Berklee School of Music, and is the official Austrian goodwill ambassador to 17 African nations. In January, 2002, Zawinul has received the first International Jazz Award, co-presented by the International Jazz Festival Organization and the International Association of Jazz Educators.

Joe Zawinul is deservedly renowned for his pioneering role in the Jazz world combining the elements of world music rock and jazz. In fact, many of the worldbeat sounds we take for granted today, simply wouldn’t exist without his revolutionary compositions and performances with Miles Davis in the late 60s, Weather Report in the 70 – 80s, and The Zawinul Syndicate in the 90s evolving into the new millenium. Don’t miss one of rare oppotunities to see one of the truly greatest musicians of our time.

E. “Doc” Smith is a musician and recording engineer who has worked with the likes of Brian Eno, Madonna, Warren Zevon, Mickey Hart, Jimmy Cliff, and Bill Bruford among others. He is also the inventor of the musical instrument, the Drummstick. He can be reached at edocsmith@comcast.net