The Jazz Experience of Charles Unger 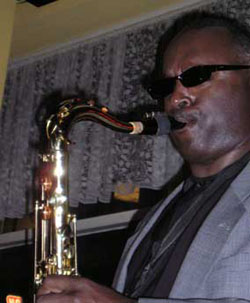 Lately, I’ve found myself fondly recalling some of my favorite saxophonists, from the incomparable Wayne Shorter and his work with Miles Davis, and later with pianist Joe Zawinul, his co-founder in Weather Report; the tender tones of Joe Henderson with Chick Corea; Bennie Maupin’s “Chameleon” with Herbie Hancock, to the unmistakable tenor of Stanley Turrentine, whose “Salt Song” features prominently in my iTunes playlist. There are many, many more of course, Bela Fleck’s Jeff Coffin, Bill Bruford’s Tim Garland, and Washington’s own Ron Holloway, to name but a few, however one Bay Area icon has continuously sparked my attention, San Francisco’s legendary Charles Unger.

Unger has performed for numerous years at Les Joulin’s Jazz Bistro on Ellis, and the Rasselas Jazz Club on Fillmore, to the delight of regulars, tourists, purists and jazz aficionados alike. Surprisingly, more have not experienced this legendary reed player. Unger and his various editions of the “Charles Unger Experience”, hope to change all that, with new recordings, shows and a renewed appetite for the sultry tones, humor, and musical explorations he has become known for.

Unger first arrived in San Francisco in 1968, at the impressionable age of eighteen, and during the famed “Summer of Love.” Unger stayed a week during that visit, and in 1969, he came back again, this time for a two week stay. According to “In Search of the City” writer Louis Martin, Unger “was hooked”. “A year later he moved to San Francisco. He played mostly rock and R & B back then. He can’t pinpoint exactly when he started playing jazz but says, “It’s always been in the background. It’s one of those things you grow up playing in school. In school bands they try to throw in a couple of jazz tunes.”

“Rock can be very seductive to young musicians these days, but Unger says it was his mom who kept him interested in jazz. “She loved Stan Getz.” Unger is African American, and I began to wonder if his mom liked Charlie Parker and Miles Davis too, but I did not get around to asking. His father was an amateur singer and song writer. “Music was his dream,” says Unger. Unger talks loose and relaxed, and his playing, which is lyrical, is like that too. It is eclectic. He can play funky R & B; he can be as lyrical as Coleman Hawkins at times; and when inspired he can rip like the young Charlie Parker…” Now in 2006, Unger remains, more committed to his music than ever.

Unger’s work with the lovely singer Valencia Hawkins at Les Joulin’s, his shows and recordings with bassist Atila Medvedski, (who reminded me of Weather Report’s Mirolsav Vitous), pianist Eugene Pilner, and drummer Andy Marquetti, are just a sampling of his ample talents. Two of Unger’s CDs, the “Unger Pangs” Live at Les Joulin’s, and “Aural Persuasion”, showcase some of his compositional prowess as well. The moody textures of “Astral Aura” with it’s lilting bass lines and percussion provide a lovely backdrop for Unger’s melodies, the Turrentine-like flavor and strings of “Riverside” open to a latin passage of a Cuban night, and the take no prisoners vamp of “Night Sounds” blends into the promise of nocturnal adventures, only to be interrupted by a deft string arrangement, and a Sonny Rollins-like/Brooklyn Bridge solo by Unger, conjuring his own solitary walk, perhaps across the Golden Gate.

But these comparisons don’t really do justice to Unger’s sound, because his tones are unmistakably his own. His ability to humorously blend the sounds of dropped forks and cash registers with his saxophone during shows, and then return to the melodies with subtlety or powerful prestidigitation, has delighted thousands. Unger tells me he’s planning on writing more these days, adding some new recording software for his Macintosh, updating his CD catalogue and website, and playing with a variety of new cats. “Jazz isn’t about the money for me”, he told me. “I’m happy, I’m fortunate really. It’s about the music to me. I don’t know what I would do if I didn’t play.” The look of joy on his face, and his trademark hat says it all… Unger lives to play.

From the deserved popularity of a Joshua Redman, the oft forgotten Courtney Pine, the avante-garde jazz of David S. Ware, to even the “happy jazz” music, (as a trumpet playing friend calls it), of a Kenny G, it is comforting to know that in San Francisco, and despite the inequities of the music world, we have another bonafide legend in our midst, an unsung hero of the horn, in the form of Charles Unger. So if you are in the mood for jazz, make your way down to Les Joulin’s at 44 Ellis on Wednesday and Friday nights, and “experience” one of San Francisco’s best jazz musicians.