The Gastronomica Reader: A Tasty Sampling from the Journal of Food and Culture 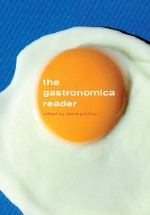 A variety of food related terms come to mind when thinking about how best to describe The Gastronomica Reader. A smorgasbord? A stew? A salmagundi (“a mixed dish,” according to cooks.com, “consisting usually of cubed poultry or fish, chopped meat, anchovies, eggs, onions, oil, etc., often served as a salad.”) Maybe the most apt description of all is “hobo soup,” defined as a soup “typically made with a random array of ingredients provided from those gathering around the soup caldron, which may have consisted of whatever was found in gardens and was given to the Hobo from kitchens as they came upon those willing to provide food for the camp.”

Yes, The Gastronomica Reader often feels like a random collection of poetry, fiction, commentary and art about all aspects of food. Food history and politics, quirky sociological insight, recipes, even food memoir have a place. But like disparate ingredients that a skilled chef transforms into a sublime dish, the 42 separate pieces included in Gastronomica, the Reader blend together to make quite a satisfying book.

The common bond? The pieces are serious. Innovative. Creative. They go deeper certainly than your typical cooking magazine piece. Way deeper. And the recipes never stand alone – they appear almost as an afterthought to musings on the meaning of the ingredients, the optics of the meal.

When my mother died in January 2009, the cookbook of her recipes that she had always dreamed of writing was left largely unfinished on her computer. When I took on the project, I thought I’d simply be organizing her instructions on how to make our family’s long-term favorites. Instead, the effort morphed into a meditation on what role food and cooking played during the lifetime of a woman intent on creating family and memories, and passing Jewish culture and tradition to the next generation. Having read The Gastronomica Reader, I think an article about my mother’s cookbook would fit neatly between the covers of this beautiful coffee table treat.

Here’s a taste of what The Gastronomica Reader has to offer:

* A first person account by a Bosnian woman who writes about feeding herself and her family during the multi-year siege of Sarajevo in the mid-1990s. Beans, rice, bread, cheese and nettles. And sometimes, nettles, cheese, bread, rice and beans.

As westerners, we know there are ravaged people living in war-torn countries across the globe. But until I read this article, I had never gotten close enough to think about what those people exactly eat, how those mothers manage to feed their children. In The Gastronomica Reader you are served this information in stark detail. No sugar coating, no shield from the flies in the beans, the mold on the cheese.

* An intricate three-day gumbo recipe, wrapped up in a story about mourning and memory. The author made the classic New Orleans meal to honor the one-year anniversary of his mother’s death. The piece fit well in a journal of food. But it’s insight into the behavior of adult siblings after the death of a parent rendered it equally suited for inclusion in Psychology Today.

* The musings of an urbane gay foodie reflecting on his childhood as a meatloaf-eating misfit whose only taste of Chinese food was chow mein from a can.

* The political, economic and religious history of how caviar became “Halal” (religiously approved) in Iran under the Khomeini regime in the early 1980’s. Replete with detailed footnotes to academic texts and other sources, this seven page article leaves no stone unturned in analyzing Islamic dietary law, the booming business of Iranian caviar, and the twists and turns necessary to sanction sturgeon’s roe in a fundamentalist country.

* A two-day recipe for marmalade disguised as a story about a New Zealand family and the meaning of community. The kind of story that makes you actually want to make such a concoction – until you remember the “two day” part of the recipe.

* A detailed history of New York Egg Cream. (Yes, you will learn why this staple of the Jewish delicatessen has no egg and no cream). You will also learn about the murky underground that took over the market for egg cream ingredients in the early 1930’s until brought down by the New York State Attorney General. Who knew?

Now you have a taste. You can dig in to more of the history, politics and culture of food in The Gastronomica Reader, edited by Darra Goldstein and recently published by University of California Press.

Lainey Feingold once had her family split pea recipe published in Sunset Magazine. She is a disability rights lawyer in Berkeley, California.