The Failure of District Elections 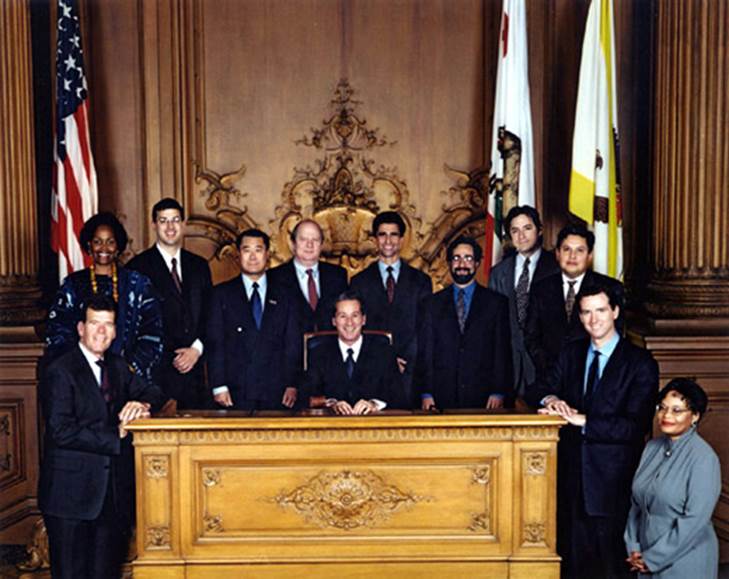 SF's 2001 Board of Supervisors

“The western side of the city should not be raped — in terms — to somehow or other accommodate some sort of ideology that says those folks aren’t doing their fair share,” Former D1 Supervisor Jake McGoldrick at November 2019 Planning Commission hearing on prioritizing housing growth on San Francisco’s Westside.

Did San Francisco’s return to district elections in 2000 boost the city’s progressive agenda? Or has it enabled politicians to identify as “progressive” while barring the non-affluent and unhoused from their neighborhoods?

You be the judge.

Since 2001 San Francisco rents and home prices have skyrocketed.  Inequality has grown, homelessness has worsened, retail vacancies have expanded and traffic has also increased. Most ominously, political opposition to new housing is as strong as ever, despite the fact that requiring workers to drive long distances to their city jobs is worsening climate change.

On the plus side: the city’s minimum wage has more than doubled,  tenant and rental housing protections are stronger, and the Planning Commission and Board of Appeal are more politically diverse ( a March 2002 ballot measure splitting mayoral and board appointments passed after district-elected supervisors put it on the ballot).

Obviously district elections alone did not cause all of the negative developments cited above. After all, mayors run San Francisco. And the two decades of district elections has coincided with two tech booms that caused housing prices to skyrocket.

But the power of district elected supervisors has restricted pro-housing mayors— elected with citywide voting— from addressing the negative housing impacts of the tech booms. In San Francisco, Los Angeles and other cities, shifting power to “the neighborhoods” now promotes exclusion, elitism, unaffordability and a worsening of greenhouse gas emissions.

Yet I have rarely if ever seen a local district supervisor’s race even raise the issue that neighborhood opposition to higher density causes those priced out of the city to engage in long daily car commutes. Elections come down to what is best for the district’s neighborhoods, not what’s best for the city or the planet’s future. Homeowners in these communities have enjoyed skyrocketing property values from restricting new housing supply—its understandable that they will back candidates supporting this agenda. (See “Homeowners: The True Gentle Gentrifiers,”Aug 20, 2019)

That’s why Los Angeles councilmembers and San Francisco supervisors almost unanimously oppose SB50, which stops neighborhood activists from preventing new apartments in their communities. District supervisors “deliver” for their communities by empowering homeowners to stop or delay new housing; that’s what they mean when they claim to support “local control.”

District elections has also made much harder for cities to combat homelessness. In San Francisco, opposition from district supervisors essentially stops Navigation Centers from opening in their district. And when neighborhood activist in one district see a shelter blocked by supervisor opposition, they expect their supervisor to do the same. This supervisorial prerogative to oppose services/housing to low-income people need not be formal (as it long was in Los Angeles) but the negative impacts are the same.

San Francisco began district elections in 1977, a contest best known for D5 electing Harvey Milk. Milk was joined on the Board by other neighborhood oriented candidates, including Dan White, who murdered Milk and Mayor Moscone in 1978. District elections threat to downtown and real estate power led to its  repeal in a 1980 summer, low-turnout special election.

In 1999 the citywide-elected Board under Mayor Willie Brown passed legislation that would have effectively ended Ellis Act evictions. The law required Planning Commission approval for creating TICs, which would have been unlikely in most cases. Tragically, the courts outrageously and wrongly threw the law out. But its passage showed growing tenant power on the Board even before district elections resumed (This preceded the so-called “McGoldrick TIC” law passed in 2001 that was also thrown out by the courts).

The 2000 district races brought such stars to the Board as Chris Daly (D6), Matt Gonzalez (D5) and Aaron Peskin (D3). Joined by incumbents Tom Ammiano, Mark Leno and Leland Yee (all went on to the Assembly and Leno and Yee to the State Senate) and Gavin Newsom (now Governor), that first district elected board was the most skilled and ambitious in city history.

Today, activist’s success at electing supervisors who put neighborhood interests first prevents San Francisco from effectively addressing its two biggest crises: housing unaffordability and climate change. As I detail in Generation Priced Out: Who Gets to Live in the New Urban America, in city after city the neighborhood “preservation” movement has been transformed from a bulwark against bulldozers and urban renewal  into a force for exclusion and elitism.

In Los Angeles, city council members long had to sign a letter approving an affordable housing project before it could proceed. This gave them sole veto power over projects and explains why so little affordable housing was built in many districts. This practice continued until pressure from the media, activists and legislators caused it to end in 2018.

San Francisco’s process of supervisorial veto is informal. A Supervisor told me in 2001 that a colleague had told him he needed to support a land use issue in another district because (I am paraphrasing) “we don’t want supervisors challenging us in our districts so we shouldn’t interfere in theirs.”

That’s how the Board has operated ever since.

So when District 7 Supervisor Norman Yee says homeless services do not fit in his district, his district does not get such services. And when a Supervisor like longtime Richmond district activist Jake McGoldrick compares building more housing in his neighborhood to rape, such upzoning does not happen.

This is how neighborhood activists across the political spectrum wanted district elections to work. It’s a great system for boosting home values (median price of a single family home is now $1.7 million) and preserving existing neighborhood demographics. It’s also a system that leads to a city whose politicians  ignore how their local votes opposing housing increase long car commutes and worsen climate change.

As long as district elections leaves supervisors beholden to the homeowners in their district rather than the city’s needs, housing will not be built in much of the city. There will not be a future generation of middle-class homeowners  unless they purchase with their parents money.

Nor will we see Navigation Centers sprouting up citywide, despite the push from Matt Haney and other supervisors . Artificial district boundaries promote the fiction that the placement of a new Navigation Center on Post and Hyde in the Tenderloin  spreads such services citywide because the site is on D3’s southern border (far, far away from North Beach and Telegraph Hill, which are now free to have no homeless services since D3 has done its part).

That’s why SB50, reintroduced today by Sponsor Scott Wiener and backed by a broad cross section of elected leaders and constituencies, is so important for San Francisco. SB50 restricts the absolute power of cities to avoid their regional housing responsibilities, all while preserving key features of local control.

Randy Shaw is Editor of Beyond Chron. He is the author of in Generation Priced Out: Who Gets to Live in the New Urban America