The Edgetone New Music Summit Continues with “Beat and Beyond; Critical Mass…” 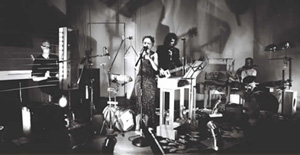 The week-long Edgetone New Music Summit moves from San Francisco to Oakland, and continues tonight through Sunday with panel discussions and performances by Pamela Z, Lx Rudis, Wobbly, Lance Grabmiller, Robert Anbian and the UFQ, Eddie the Rat, Jesse Quattro, Bruce Anderson and Gowns. If you haven’t had a chance to see some the Bay Area’s greatest sound artists, come to 21 Grand Gallery in Oakland for what promises to be another year of wonderful performances.

Every year the Edgetone New Music Summit showcases some of the most innovative and pioneering new music that is happening in California and beyond. The Festivals’ expanded performance schedule includes music and sound from raging free improvisation, electronic manipulation, to harsh noise reflecting an incredible range of genre busting exploration and sonic creativity. In addition, the festival seeks to promote intermedia arts, fostering cross-pollination between music/sound art and experimental flim/ visual arts.

The festival also pays homage to local as well as California’s central role in the development of invention and cutting edge concepts. Historically dating back to the inception of the Barbary Coast of San Francisco in the early 20th century, the San Francisco Bay Area has been and still is the location where many of the founders of new ideas in sound live and have lived including Ives, Pauline Oliveros, Glenn Spearman, Lisle Ellis, and Terry Riley to name a few. Today, the SF Bay Area, in the heart of California, is home to one of the most bustling and expanding new music scenes fostering the next generation.

Pre-Concert Composer Q&A
Interactive discussions of techniques and influences with composers, who will share context and insight into the performance work.

Panel Discussions
Drawn from Sources:
Inquiries into the sources, intent and challenges inherent in experimental music, and its place in our creative and social fabric.

OUTSPOKEN EVENTS
OUTSOUND, in addition to being one of the largest new music presenters on the West Coast, is also presents the OutSpoken Education Series consisting of pre-concert Q&A, master classes and artist panel discussions during the Summit event. This year’s presentation is dubbed Drawn from Sources: Inquiries into the sources, intent and challenges inherent in experimental music, and its place in our creative and social fabric.

TICKETS AND INFORMATION
Tickets are currently on sale to the public. Schedule and artists are subject to change.
There are two ways to purchase tickets:
• Visit www.edgetonemusicsummit.org
• Purchase tickets at the door on the night of the performance