The City of Oakland Needs a Bailout 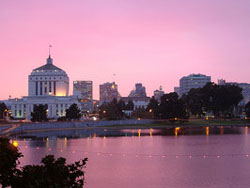 Replete with a three horn band, umbrella toting union protesters wore wide brim black church hats in a New Orleans style funeral to mourn the death of City Services at the City of Oakland last Tuesday. The several hundred person procession lead by SEIU Local 1021 moved in and around Oakland City hall and carried signs that read “Save Our City” “Save Our Services.”

Before a packed City Council Chamber, City of Oakland Mayor Ron Dellums presented a budget that would eliminate 84 jobs and drastically cut services in the already economically distressed City. “700 billion is being given to bail out Wall Street,” said Oakland resident and SEIU 1021 Union President, Damita Davis-Howard. “We’re about to be devastated. Where is the Bailout for the needy of Oakland?”

Her testimony along with that of many others cited numerous problems with Dellums’ plan and also cited the opportunities now possible to address the City’s needs. Davis-Howard also urged the City to work with the Union and Community groups to find ways to make the City work without further cuts to City residents. “Work with us we can find a way to make it work,” she urged the Council.

The mourners were a part of a larger demonstration joined by members of IFTE Local 21, Union members from the City of Berkeley, The City of Emeryville, the Port of Oakland, Community groups, the Alameda County Labor Council and others who packed the Oakland City Council chamber, spilled out onto the stairs and on to the street.

After months of reserving public comments critical of the Mayor, SEIU Local 1021 union members and their supporters broke their silence and openly protested the Mayor’s plan. They urged the Council and the Mayor to “Chop from the top.”

Testimony from one supporter cited a bloated City Administration with highly paid management positions far out of proportion to the number of rank and file positions.

In further contrast, other speakers noted that the City of Oakland employs hundreds of part-time “temporary” un-benefited workers, who have worked for the City for years defying the meaning of the word temporary. Speakers also noted the inverse relationship between the number of overpaid management positions and the huge number of under paid “temporary” workers. Over 800 workers work as temporary part-time workers, known as “TPT’s.”

One wonders how many temporary part-time workers can be hired into full-time positions for what the City pays in un-needed administrative positions.

Others testified about the loss of potential work due to lay-offs now being given away to contracts awarded under a City of Oakland Administration recently associated with Nepotism and Cronyism. SEIU Local 1021 City workers have been bargaining for a new contract for months and have asked for copies of City vendor contracts to find out who outside the City is getting paid to do City work. How much they are getting paid? And what are their associations to City officials.

Union members have been in bargaining for a new contract with the City of Oakland for months with little success. Prior to Edgerly’s departure, contract talks with the Union were practically stalled and requests by the Union for copies of the City contracts to outside vendors had been repeatedly ignored.

In May of this year, the Union filed Unfair Labor practice charges against the City for harassment of union members for their participation in May Day events including a rally in front of Oakland City Hall to honor May Day and the West Coast Port shut down to protest the War in Iraq.

And more recently, Purple Flu is rumored to have afflicted City of Oakland workers causing a majority of them to miss work.

Only now has the City finally agreed to produce the vendor contracts for the Union to review and has begun to lay the groundwork for productive talks with the Union by changing the City’s representatives at the bargaining table. Union members continue to press the City to stop contracting out work that can be done by union members who face potential layoff and to work with the Union to stop the bleeding of services vital to children, seniors and the disabled.

The City can do more.

Now is the time for the Mayor and the Council to meet with Union Representatives in an effort to resolve the City’s problems and to do so in a way that honors the past common legacy of struggle, a labor legacy that is unique to the City of Oakland. As SEIU 1021 president Davis-Howard suggested, why isn’t the City sitting down with Union members to find ways to root out inefficiencies and to do so collaboratively in a problem solving way? Union members do the work and they know the work. Why aren’t City officials consulting with them instead of trying to get rid of them? Why aren’t City officials working with Union members to do more to provide a living wage for City of Oakland residents?

It’s time to remove the excesses created by top down institutional neglect and patrimony.

It’s time to step away from the usual bargaining table posturing to take a step up, a step up to lead in service of the citizens of Oakland who both need and deserve better.

The Union is ready.

Is the City of Oakland?