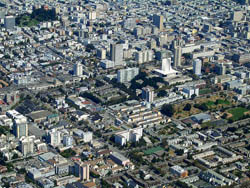 It is 27 years late, but the San Francisco Chronicle has finally discovered that San Francisco is becoming a city of the rich and poor. The paper’s June 22 banner headline “RICH CITY, POOR CITY” discussed a Brookings Institution finding that middle-class neighborhoods are declining in urban America, and the Chronicle then found evidence of this trend in San Francisco. But the Chronicle omitted some critical facts that undermine its conclusion that neighborhoods like the Western Addition have shifted from “middle-class” to “low-income.” The Chronicle also failed to reflect the dramatic changes in San Francisco’s demographics in the six years since the Brookings study was completed. Since a little knowledge can be a dangerous thing, here are the facts—and the even more troubling conclusions— missing from the Chronicle’s analysis.

It should not take a Washington DC-based think tank to tell us that high housing prices have steadily driven the middle-class out of America’s major cities. Nationally, the percentage of middle-income metropolitan neighborhoods has fallen from 58% in 1970 to 41% in 2000, and is likely much less than that in 2006.

But the meaning of these statistics is confused by the terms “middle-income” and “middle-class.” Whereas the New York Times article at least explained how the study defined lower, middle and higher income levels, the Chronicle did not. This helps explain its bizarre conclusion that the Western Addition has undergone reverse gentrification in recent decades.

The reason a neighborhood like the Western Addition fell from middle to lower income is that gentrification has displaced the traditional middle-class and left non-wealthy renters in public or subsidized housing or in longterm rent-controlled protected units. Many homeowners who purchased prior to 1985 are also likely to fit the current “low-income” category in 2006.

Rather than relying on six-year old data from a DC-based think-tank, the Chronicle could very easily have used an alternative method of assessing who can afford to live in the Western Addition: examine prices for rental units and homes on the market. This would show a neighborhood “off-limits” to the unsubsidized poor, and one that is only open to new residents from the middle and upper classes.

The Chronicle could also have had a reporter tracking no-fault evictions over the past two decades, in the manner that it routinely covers crime stories. Had the Chronicle provided such ongoing coverage, the fact that San Francisco has become more economically stratified than at any time in its history would not need to be treated as front-page breaking news

Curiously, the Chronicle story relied on the downtown planning group SPUR for its assessment of what’s happening to San Francisco’s demographics. While SPUR officials are quoted as decrying the middle-class displacement from cities, this is the logical outcome of the group’s own policy positions. SPUR opposed every ballot initiative in the 1980’s seeking to limit highrise office development because of its gentrifying impacts, and opposed or took no position on every ballot measure or piece of legislation designed to help protect middle-class tenants from displacement.

For over four decades, SPUR and its downtown backers have been the primary architects and cheerleaders for the land use policies that have chased low-income middle-class families out of San Francisco. No group has been a greater fan of the urban renewal strategies of the San Francisco Redevelopment Agency, and SPUR endorses virtually every luxury housing development.

The only entity that matches SPUR’s longtime complicity with pro-gentrification policies is the San Francisco Chronicle. The paper has long hoped that bringing more rich people to San Francisco would boost circulation and advertising revenues, but the city’s gentrification has not stemmed the Chronicle’s steady financial and readership decline.

The Brookings study was a strange choice for front-page story in San Francisco because its six-year old findings are particularly out of date for the city. Housing prices have soared since 2000, while a construction boom of market-rate units has further tilted the city’s demographics toward the rich.

Since 2000, the upscale trend in housing development, the large number of rental units converted to tenancies in common via the Ellis Act, and sharply rising existing home prices have all moved San Francisco into becoming even more a city of rich and poor than is evidenced from the Brookings report. The steep reduction in public school enrollment since 2000 is further confirmation of this trend.

There has been another major post-2000 development that has further hastened San Francisco’s becoming a city of rich and poor: the dramatic increase in permanent housing units for formerly homeless people. As a result of Care not Cash and the hotel leasing program, the entire North of Market area is a longterm neighborhood for the very poor. The same can be said for Sixth Street and in the 16th Street corridor in the Mission District.

While San Francisco’s poor survive in the city through local, state and/or federal housing subsidies, the middle-class have only rent control and various land use restrictions to protect them. As much as the Mayor and many city officials talk about creating homeownership opportunities for “middle-class” families, San Francisco voters have repeatedly rejected subsidizing housing for families earning as much as $109,000. Nor is there much public demand for subsidizing “middle-class” single people earning as much as $76,000.

Given the pressures to circumvent local rent controls, it is rather amazing that San Francisco in 2006 has as much economic diversity left as it does. Had the Chronicle supported rather than aggressively opposed anti-gentrification measures over the past three decades, it would not have to shed crocodile tears over San Francisco’s steady demographic trends.

On the same day the Brookings report was released the Economic Policy Institute released findings that America’s CEO’s now earn on average of $11 million, or 262 times the amount of the average worker. Add to this the Bush Administration’s handing over of billions to the wealthy in tax breaks, and it is easy to see why rich people are lining up to purchase million dollar condos at Rincon Hill, while San Francisco’s departing middle-class desperately seeks an affordable three bedroom home in Daly City or Pinole.