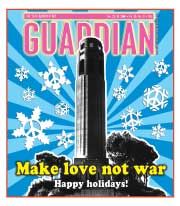 The Bay Guardian spent millions buying a building in lower Potrero Hill, but now seems unable to afford fact checkers. That’s the most charitable explanation for its wildly inaccurate story and editorial on Supervisor Maxwell’s zoning controls for the Potrero neighborhood. The Guardian got nearly every key fact wrong—and that’s only a small part of the paper’s misleading coverage.

The premise of the Bay Guardian’s December 22 story is that the Board of Supervisors approved the controls “but only after exempting four Residential Builders Association proposals that could lead to the development of 579 housing units along 16th and 17th Streets (“Leaks in the plug,” by Rachel Brahinsky).

In truth, there were three RBA projects involving a potential 161 units. A difference between 161 and 579 units is quite an error.

The Guardian then added to its misinformation:

Another large project that would bring 400 housing units to the intersection
of 7th and 16th Streets, known as the Daggett Triangle, was excluded for the same reason .”

This statement is false. The Daggett Triangle was never excluded from the interim controls. Nor was any 400 unit project exempted by the Board.

During the December 14 Board meeting, Supervisor Matt Gonzalez sought assurances from the zoning administrator that the Daggett Triangle was included in the interim controls. Gonzalez stressed that he would not vote for any controls that excluded that site, and only voted for the controls after receiving such assurance.

The Guardian’s factual error regarding the erroneous 579 unit “leak” led the paper to editorialize that a “smelly deal” and “backroom politics” had undermined Maxwell’s legislation (“The RBA Potrero sellout”). This further challenged the integrity of Supervisors Daly, Gonzalez and Sandoval.

The Guardian owes these progressive Supervisors an apology.

The Guardian had nearly a week to make sure its facts were correct, and a call to either Matt Gonzalez or Chris Daly could have set the record straight. But they instead ran an article and editorial that defamed the two progressive leaders on the Board as backroom dealmakers and sellouts.

The interim controls cover a 41-block area, and only the Guardian views the exclusion of three small projects as “undermining the point of the moratorium.” The paper makes much from the three builders happiness after the vote, but does not mention that Supervisor Maxwell was jubilant after the measure’s passage, and gleefully accepted congratulations from her colleagues.

The Guardian coverage also misrepresented the two main factors that led to the exclusion of the three projects.

The first was the Board’s recent 9-2 vote on an amendment to Supervisor Daly’s recent condo conversion law. Supervisor Maxwell and eight of her colleagues exempted owners of duplexes who had evicted elderly or disabled tenants from Daly’s tougher conversion restrictions, saying it was “unfair” to “change the rules” to punish current owners.

Supervisor Dufty argued that the same logic should apply here. He proposed that builders with projects in the pipeline and who bought property under the current zoning controls should be exempted from the Maxwell legislation. Maxwell had no problem voting to protect landlords who evicted vulnerable tenants for profit, but refused to protect builders who had not evicted anybody.

The second factor, which swayed the two Supervisors (Daly and Gonzalez) who had opposed exempting existing duplex owners from the more stringent rules, was the curious exclusion from Maxwell’s legislation of Bill Poland’s proposed 600 unit project at Showplace Square.

When the Guardian first wrote and editorialized in support of the interim controls, Maxwell’s exclusion of Poland’s monster project was ignored The Guardian ignored the biggest project threatening blue-collar jobs in the neighborhood while it raised hell about three small projects owned by members of the RBA.

Both Gonzalez and Daly aggressively argued in favor of including Poland’s project. Gonzalez stated that a 600 unit housing development at Showplace Square was entirely inappropriate, posed a severe risk to industrial uses in the area, and should be stopped in its tracks now rather than later.

Gonzalez offered to oppose any exemptions, including those pushed by the RBA, as long as Poland’s project was similarly treated. But Gonzalez refused to give a big developer a pass while penalizing three small projects.

Maxwell refused to consider Gonzalez’s amendment. Why? Had she made a “backroom deal” with Poland? The Guardian cites Maxwell’s weak explanation, but has been curiously uninterested in her unwillingness to further protect blue-collar jobs.

While the Guardian’s recent editorial claims that Maxwell should not have exempted Poland’s project, it’s a bit late. The paper threw its full support behind her proposal despite the Poland exemption and never pushed to include the Poland project prior to the Board vote.

The error-prone and sloppy journalism that has surrounded the Guardian’s coverage of Maxwell’s legislation reflects its broader agenda. Bruce Brugmann did not come to the Supervisors meeting on December 14 because he really feared the impact of 161 more housing units in lower Potrero, projects that still must be approved by the Planning Commission and Board of Supervisors.

No, what bothers the Guardian is that progressives like Gonzalez, Daly and Sandoval voted for an amendment supported by the RBA.

The Guardian sees market-rate housing as evil, and Joe O’Donoghue and the RBA as the heart of darkness.

The Guardian’s recent cover story on O’Donoghue argued that progressives should “be very afraid” of the RBA. The reason? The RBA supported the Gonzalez mayoral campaign, financed the defeat of Mayor Newsom’s Workforce Housing Initiative (Prop J), and funded ballot measures to protect rent-controlled housing at Trinity Plaza.

Rational progressives would be cheered by the RBA’s support for such causes. But for Guardian publisher Bruce Brugmann, the RBA is simply trying to woo progressives as part of a nefarious plan to win political support for the greatest evil of all: market-rate housing.

I will discuss the role of market-rate housing issue in more detail in a subsequent piece. But if the Guardian’s analysis of the group’s stealth strategy is correct, the RBA is one dumb organization.

Why spend hundreds of thousands of dollars battling Mayor Newsom when the surest route to project approvals during the Newsom mayoralty is by supporting the mayor’s agenda? But Joe O’Donoghue and the RBA have been at war with the thin-skinned Newsom, despite his power to defeat their projects. And let’s be honest– currying favor with Chris Daly is not exactly the route for winning favors from the Mayor.

The Guardian is free to bash market-rate housing and the RBA all it wants. But it should get its facts right, and not attack progressive supervisors for not sharing the paper’s obsessions.