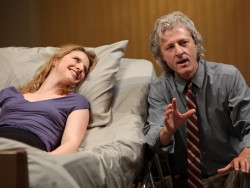 WAS IT AN ACCIDENT?

“The Accident” keeps you on the edge of your seat in this perfect script. The narration revolves around an Accident. But this accident becomes more involved than most. A man hits a woman in a parking lot. He didn’t intend to do it. And maybe she purposely rode her bike into the path of his car. She ends up being paralyzed. He visits her every day.

They have some pretty bumpy, but interesting conversations. He is shocked, feels guilty and is unable to come to terms with this tragedy. Oddly enough, he helps her. She becomes stronger – and he begins to fall in love with her. There are a couple of really shocking scenes involving the hospital bed, bare bosoms and other surprising things.

“The Accident” is the kind of play that you really can’t reveal that much about. If I do, it would ruin the entire surprise. I can only say that these are the most astounding performances that I have seen in a long-long time.

The set is one of the best at the Magic. The lighting is perfect and compelling. The cat and mouse dialogue keeps you wondering – “What in the hell are they going to say next?”

The Stars – Arwen Anderson (Libby) has to use her eyes in most of the play. She can’t move – she can’t talk. Terror is in those eyes. Tim Kniffin (Anton) is the man who put her in this dire condition. Kniffin is probably one of the most watchable actors around. He is a combination of Dustin Hoffman and Richard Gere. Both give sublime performances.

The world premiere by Lydia Stryk is a richly rewarding gem! The Direction by Rob Melrose has made it a “Hot Ticket!”

This proves once again – that the Magic Theatre is on the right track — and they are firmly in control, with some of the most exciting plays to come to the Bay Area this season.

AT THE MAGIC THEATRE – FORT MASON THROUGH MAY 9TH.

Christine Ebersole as she looked on stage in ‘Grey Gardens.’ Courtesy Photo.

GORGEOUS, SENSATIONAL SINGING VOICE AND GREAT STAGE PRESCENCE is what you get when C.E. takes the stage.

The Electricity fills the Ballroom the minute she enters from the back of the room. Heck, even if she didn’t sing we would have loved to just sit and look and her. She is that ‘electric’.

Ebersole is probably one of the best vocalists ever. The two-time Tony Winner wowed the audience at the Sir Francis Drake Ballroom – wrapping up “Bay Area Cabaret’s” season. She swoops from one fabulous composer to another, with songs from Cole Porter, Harry Warren, Noel Coward and others. And her Eartha Kitt tribute near the end of this glamorous and entertaining evening was absolutely fantastic.

The audience leaped from their seats to give a long-standing ovation.

Marilyn Levinson, the Artistic Director of “Cabaret Bay Area” revealed some wonderful news. Although she did not tell us who would be next seasons stars – she did jolt the audience when she announced that next season will be at the Gorgeous Fairmont ‘Venetian Room’. What a thrill – everyone was talking about the glory days of that Room. I hope that it will start a trend – and bring back those marvelous days. Can’t wait to see the room come alive again.

The Callaway Sisters at the Rrazz Room. Photo: Pat Johnson.

There is something for everyone is the fast moving Cabaret show at the Rrazz Room. The Sisters sing Berlin, Porter, Comden and Green, Coleman, Sondheim and Leosser. And that is just the beginning.

With a song written by sister Ann Hampton Callaway, they both sing together “Here Come the Callaway’s.” And like it or not they make a huge statement and now own the stage at the Rrazz. Throughout the show Ann and Liz jostle with each other for stool space. And they jest with each other on songs like “Friendship” by Cole Porter. The song is meant to be a little bitchy, and it is – but I would like to see them really sink their teeth into each other. I mean Girls – really let go and have it out. With words that is.

The entire evening is total fun. They joke back and forth between songs. Ann: “What are you doing?’ Liz: “Just showing everyone my new solo C.D.” Ann: “It’s not really as big as my Emmy – or your husband.” A little double meaning here? I have one little suggestion. I would drop the “Over The Rainbow”. Sure Ann gives it her all – but that is Judy’s song, and hundreds have tried to reinvent the song to make it their own. It just doesn’t work. The song is burnt into people’s minds as Judy’s.

After singing a Harold Arlen song – Ann sez – “Nobody does weather like Årlen.” Again showing the ongoing humor.

Just about the middle of the show – it really becomes electric. With Stephen Schwartz’s “Loathing” – “A Boy Like That” (West Side Story) Bernstein/Sondheim – “I Know Him So Well” (Rice, Ulvaeus, Andersson). All Just Fantastic! Loved every moment of it!

“Our time” by Stephen Sondheim sung by the Sisters takes on a new glow. Liz sings a sensational version of “Meadow Lark” from the musical “The Baker’s Wife”. Funny, I have seen that musical a couple of times. And I didn’t remember it being in the show. If it sounded as good as Liz’s version – I’m sure I would have remembered it.

This is a good time show. It’s Sorority girls gone wild – jiving to a big-band hit parade of songs from the Great American Song Book.

See this show…and like the song — “I Still Believe” – you will still believe that music is the BEST thing in the world. www.therrazzroom.com. Through May 2, 2010.