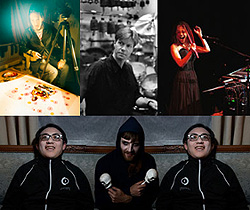 Outsound Presents, the home grown artist nonprofit collective of the Bay-Area returns July 18th – 24th for the 9th Annual Outsound New Music Summit, one of the most comprehensive experimental music festivals on the West Coast with another unique roster of talent. The festival seeks to build on its reputation for diverse and critically-acclaimed performances with headliners that run the gamut from the films of Martha Colburn, multi-phonic drummer Alex Cline, the siren voices of Amy X Neuburg to the unabashed performance noise of Chen Santa Maria.

Every summer since 2002, the New Music Summit spends a week in July showcasing some of the most innovative and pioneering new music that is happening in California and beyond. At first a celebration of the eclectic vanguard artists on the DIY Edgetone Records Label, the Summit now features a broad range of artists from across the US, Europe, Australia and Japan. It features world premieres and exclusive debuts, raging free improvisers to microtonal composition to experimental electronics to harsh noise, reflecting an incredible range of genre busting exploration and sonic creativity. The Summit promotes intermedia, fostering cross-pollination between disciplines of music, sound art, visual and media arts. It is committed to bringing highly innovative music and art to a growing audience seeking a new experience.

The 9th Annual Outsound New Music Summit takes place July 18th through the 24th at the San Francisco Community Music Center, the Summit’s home for the past three years. The festival schedule includes the much anticipated yearly Touch the Gear tm, a free hands-on expo Sunday July 18th where attendees can experience new sounds and the devices that make them. A build your own cardboard synthesizer (Skatchbox) demonstration Monday July 19th with grandmaster instrument builder Tom Nunn, pre-concert artist talks, and four nights of music featuring a diverse lineup of artists.

The mission of Outsound Presents is to raise public awareness of avant-garde and experimental music and sound art. All events and works supported by the organization focus on the creation of experimental music, avant-garde musical composition, found sound, improvisation, creative music, new music, noise, musique concrète, minimalism, invented instruments, genre-bending music, and sound that is sculptural or textural in nature. Outsound Presents events also include film, dance, and intermedia works. Through its two year around music series, its fledgling community education program OutSpoken, and a palette of artist services, Outsound Presents connects audiences to new work and the innovative artists creating it.

Sunday July 18: Touch the Gear
Ever wanted a closer look at the gear on stage? Wish you could try it yourself? Touch the Gear is Outsound’s free public OutSpoken event that allows audiences to roam among over 25 artists and their sonic inventions, asking questions, making noise and learning how these often one-of-a-kind set-ups work. It’s a hands-on, family-friendly environment that demystifies the technology while inspiring creativity. 7-10 pm

Monday July 19: How to build a Skatchbox – Demonstration
At this OutSpoken event participants will lean how to build their very own experimental musical instrument from a cardboard box. Inventor Tom Nunn will explain the techniques and demonstrate the processes used. 7-9pm