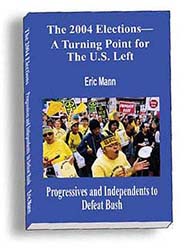 In The 2004 Elections- A Turning Point for The US Left, Progressives And Independents To Defeat Bush, Eric Mann offers us this election year’s clearest analysis. Not only of the political forces at work but also of how to move forward and have an effect on the coming election.

Possibly the most important aspect of the analysis in this book is the refutation of the popular conception of who this years much commented on “swing voter’s” are. Mann points out that the mass media outlets have gone out of their way to characterize these voters as being white and middle or working class. He goes farther to point out that the Democratic Party has done little or nothing to energize the vote of Black/ Latino/ API/ Immigrant communities, in their efforts to pander to these white conservative voters, many of who they lost in the Regan Era. He points out that the Democrats expect 90% of the Black vote and do not care if they register more voters within oppressed nationality groups. Even though these voters could clearly swing the election in several key states. This he points out is the opening of the Progressive Left movement in this election. To use our understanding of the political landscape, our connections and our analysis of the political forces at play to organize these voters who the democrats are hanging out to dry.

Making a prophetic warning Mann points out that without re-enlivening the traditional democratic base the Democratic Party may very soon not be able to consider some “safe states”, like California, to be safe in the long run. He cites the election of Arnold Schwarzenegger and the on the ground abandonment of both parties in this election season as another opening for the Progressive Left to take up those grassroots organizing responsibilities. And use the forward movement to build a new left organization, which could have a lasting influence both in the state and nationally.

Far from being an endorsement of John Kerry, Mann creates a “John Kerry Without Illusions” approach. PAIDB soberly analyzes both candidates, and concludes that George Bush is the clear and present danger. For ,in part, his stealing of the 2000 election, his theory and practice of preemptive war, creation of the Department of Homeland Security, crafting of the Patriot act, contributions to the international ecological crisis and attacks on labor rights and civil rights legislation. Mann declares that Bush is in fact a right wing revolutionary, who essentially does not believe in bourgeois democracy. In contrast Kerry who is unquestionably an Imperialist, does in essence believe in bourgeois democracy, at least within US borders, and support’s Ted Kennedy’s FAIRNESS act and restrictions on the PATRIOT act. Mann leaves off stating that though there are many more criticisms to be made about Kerry, he is not a critic but a strategist, and that nationally and internationally it is strategically important to back Kerry over Bush.

Though this analysis is of course not new to most any one picking up the book, its didactic approach is refreshing and intellectually engaging in a way that most of the other election-year books have not been. It demands more from the reader than the normal “any body but bush” analysis, and in so doing raises the base level of debate amongst left forces.

Mann is as unrelenting of the 3rd party choices this year as he is of Kerry. Though he is clear to support Ralph Nader’s right to run and critical of Democratic Party attempts to force him off the ballot. He is also clear that a vote for Nader will in fact run the risk of electing Bush to four more years, and points out that Nader himself has not been willing to take responsibility for this fact. Observing that Nader was able to justify his 2000 run by stating that he wanted to get the Green Party on the ballot in each state, thereby gaining access to debates and building a party that could actually win some state wide elections in the near future. Mann argues that seeing Nader and Camejo have both essentially abandoned the Green Party the only beneficiaries for their current campaign will be themselves. Seeing the potential effect of their candidacy is a Bush re-election he determines that progressive forces cannot afford to support Nader/Camejo. Mann is more in line with the thinking of the Green Parties David Cobb and his “safe states” strategy but says that he is ultimately of the opinion that the Greens should not have run a candidate in this election at all.

More than a compelling analysis this book is a call to action. In fact the author has, along with allies based in LA. Already begun building a framework for the creation of a new left organization with the same name as the book to become active in the few weeks before the election. Having already created a detailed tactic path for the organization all that remains is for the campaign to be staffed, and the course adopted. Again, a refreshing development, that the most complete analysis of our current political situation is coupled with a means for its implementation; and does not remain solely an intellectual excercise.

You can visit
www.progressivesandindependentstodefeatbush.org for more information