The 1960’s Underground Press Lives On 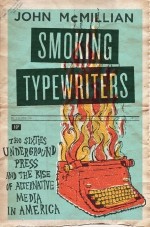 During the 1960’s, an alternative press emerged that became the voice for youth culture and the era’s social movements. These scrappy publications reported stories the mainstream media would not touch, mobilized anti-war activism, promoted rock and “underground” music, and ultimately played a central role in creating a vibrant 1960’s counter-culture. By the late 1970’s, however, youth culture became big business, and slicker magazines like Rolling Stone replaced the Berkeley Barb, Los Angeles Free Press, and other 1960’s stalwarts. David Armstrong’s A Trumpet to Arms: Alternative Media in America (1981) and Abe Peck’s Uncovering the Sixties: The Life and Times of the Underground Press (1991) recounted the history of the underground press, and Peter Richardson’s widely acclaimed 2009 book on Ramparts magazine, A Bomb in Every Issue highlighted the ongoing legacy of many of its reporters. Now John McMillian has written, Smoking Typewriters: The Sixties Underground Press and the Rise of Alternative Media in America, the first such broad analysis in the Internet age. McMillian provides a contemporary context for evaluating the 1960’s alternative media, reminding us of the richness of the underground press’s legacy and helping us compare it to the blogs and alternative websites of today.

Decades before founding of the alternative online news source Beyond Chron, I was fascinated by the 1960’s underground press. I recall picking up the Los Angeles Free Press and feeling that I had gotten a special pass into the 60’s subculture –
which in fact was true, as the paper known as the Freep covered politics, music and movies from a very different perspective than I got from the Los Angeles Times.

What I always admired about the 1960’s underground press was that its writers were often participants in the struggles they covered. They provided the type of first-hand perspective that Norman Mailer made famous in Armies of the Night and that became a staple of the New Journalism, the difference being that underground press writers were activists first and journalists second.

John McMillian provides an account of the 1960’s underground press that is less complete than Armstrong’s work or Abe Peck’s out of print classic, but which has the great advantage of being able to evaluate the press in the context of the Internet. And frankly, the rise of blogs and alternative websites has made the history of the underground press far more worth studying, as it provides guidance – some would say of the cautionary sort – for contemporary endeavors.

The Rise of the Underground Press

The rise of the 1960’s underground press is an often told and quite simple story.

As youth culture and 1960’s social movements emerged, the mainstream media missed, ignored, and/or confused the story. As a result, anyone seeking to learn what was really happening in Vietnam, or in United States politics generally, or who wanted to learn about marches, protests and rallies, or who wanted to read about rock and underground music and get the youth perspective on movies and other pop culture – had to go to the alternative press.

These were the days before corporations’ co-opted “alternative” culture like hip-hop music seemingly overnight. As much as it is argued that corporate media organizations go where the money is, in the 1960’s these institutions sought to suppress rather than co-opt the counter-culture, causing an underground press to emerge and thrive.

McMillian describes the workings of many of the most influential sixties publications, including the Freep, Village Voice, Berkeley Barb, Chicago Seed, and the Austin, Texas-based Rag. He devotes even more space to the workings of the Liberation News Service, whose articles appeared in underground papers across the nation and whose internal dysfunction typified many of these publications.

The Fall of the Underground Press

This is also a simple story. As the Vietnam War wound down and many sixties era movements declined (though the Cesar Chavez-led UFW was still growing and the women’s movement was building its own underground press), the role of alternative weeklies as the voice of dissent was less central. At the same time, the co-optation process was in full swing, as advertisers found less left-wing vehicles to place their ads for beer, hip clothing, music and other products of the youth market.

Jann Wenner started Rolling Stone in 1967. McMillian does not make the full case others have that the slicker, more ad-friendly Rolling Stone help kill the advertising base for the underground press, but it’s understandable how corporations would favor a more readable publication directed to young people over alternative media with weaker production values and less streamlined business operations.

Mainstream media also began what turned out to be a transient phase of investigative reporting into abuses by corporations and the political establishment. When the New York Times published the Pentagon Papers in 1971 and the Washington Post uncovered Watergate soon after, the notion that only “underground” papers would break such stories was dispelled.

The Underground Press and The Internet

McMillian recognizes that while the underground press preceded the Internet blogosphere in democratizing the media, circulating information, and helping to build the political left, the papers of the 1960’s had a broader agenda of building a youth-driven progressive movement. Today, sites like Daily Kos, Firedoglake and the Huffington Post provide progressive news and try to create a sense of community among both readers and bloggers (described in the former as “Kossacks”), but they are not echoing the 1960’s underground press in building a counter-culture.

There is a critical distinction between progressive websites that mobilize political action and influence mainstream media political coverage, and an underground press that saw politics as just one part of its push for a broader cultural transformation. The Internet has greatly facilitated the former, but these political-oriented sites are not striving to fulfill the latter.

Consider that the Huffington Post, the most read progressive political site, still gets most of its hits for its mainstream entertainment/gossip stories – and was initially funded by top Hollywood talent that would have been deemed “the Establishment” by the underground press of the Sixties.

As McMillian describes, for all of its weaknesses, the 1960’s alternative media aspired to not only change United States politics, but to remake the world. That it had more success culturally than politically does not detract from the audaciousness of its ambitions, or the scope of its legacy.