Thanksgiving is a Lie 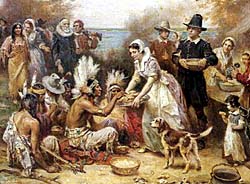 Thanksgiving is a lie. Just like Santa Claus and the Easter Bunny.

There’s no more truth to the Hallmark moment of Pilgrims and Native Americans sharing a feast of squash, corn and turkey than there is to Betsy Ross sewing the first American flag. No definitive historical evidence exists to prove either patriotic legend. According to my favorite history text, “Lies My Teacher Told Me” by James W. Loewen, it was all manufactured to create a feel-good beginning for this country.

Thanksgiving wasn’t invented by the Pilgrims. By the time the Mayflower pulled up at Plymouth Rock in 1620, Native Americans in that part of the country already had a rich tradition of marking the fall harvest with a major fiesta. The day wasn’t recognized nationally until 1863 when President Abraham Lincoln declared it a holiday. He had an entirely different motive than honoring the Pilgrims: Morale during the bloody Civil War. America needed a warm fuzzy holiday to make it feel good about itself again.

The Pilgrims were latecomers to the legend, not getting added to the mix until the 1890s.

Of course, some major revisions had to be done to make heroes of those guys. The truth is: When the Pilgrims arrived on the coast of Massachusetts, they found a deserted Native American settlement. Unburied human bodies were scattered everywhere. The survivors had vanished. The villagers had been wiped out by a plague, brought to the “new world” years before by the Europeans. The immune system of the native peoples had no defense against those diseases. Many in Europe couldn’t be happier.

Good Christian that he was, King James of England called the death of millions of Native Americans “this wonderful plague.” He thanked God for sending it. Other preachers of the day echoed this same sentiment. They believed that God had aided the conquest of the new land by sending disease to ravage the native populations, so that the English could have it. How convenient for them that God was on their side.

The Pilgrims, who were ill-equipped to survive in the harsh environment they found themselves in, immediately took advantage of the situation. They proceeded to rob food (including corn and squash) and pottery from the deserted Native village. They also stole from Indian graves. Within about 50 years of arriving, they had slaughtered most of the native population in the area that wasn’t already killed by the plague.

Not the touchy-feelie story you’ll see on TV this week.

Tommi Avicolli Mecca is a radical, southern Italian, atheist, working-class, queer performer, activist and writer who bakes a mean tofu lasagna around this time of year.