Thank Darwin for Separation of Church and State 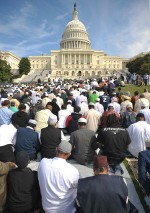 About 3,000 of the nation’s 1.8 million Muslims gathered on the lawn of the Capitol last weekend for what organizers claimed was not a protest, but rather a prayer event for unity among those who practice their religion.

The main organizer for the “Day of Islamic Unity,” Imam Ali Jaaver of the Dar-ul-Islam mosque in Elizabeth, New Jersey, told the Washington Post, “We wanted to bring people out to show you don’t need to fear America. We’re decent Muslims. We work; we pay taxes. We are Muslims who truly love this country.”

The pray-in took place on a Friday because “Muslims believe Adam was created on a Friday and that he was entered into and expelled from paradise on a Friday,” a press release stated. In Islamic culture, Friday services are mandatory for men, but women and children (including boys who have not reached puberty) are “free to attend,” though they don’t have to.

Throughout the two-hour event, speakers praised President Obama for calling for peace with Muslims and including them in speeches during last year’s presidential campaign. Obama has also mentioned “nonbelievers” in his references to the diversity of this country.

The event was peaceful, even with the presence of 50 right-wing Christian protesters, who shouted at the Muslims and had to be admonished from the stage for their disruptions.

The Rev. Flip Benham of Concord, North Carolina, stood by a 10-foot cross and an equally large replica of the Ten Commandments. He yelled at the crowd: “I would suggest you convert to Christ!” And in one of the most ironic comments from a fundamentalist in a long time, he said that Islam “forces its dogma down your throat.”

Guess he forgot about all those years of Christian rule of Europe, not to mention the Crusades and the Inquisition. Not exactly a picnic for non-Christians.

“When Islam is weak, they will be the religion of peace,” commented Rusty Thomas, a man of the cloth from Waco, Texas. “When they get the upper hand, out comes the sword.”

Though he didn’t know it, Thomas was speaking of his own religion as well. Both Islam and Christianity have proven that when they have control of a nation, civil liberties go down the drain. There is no room for dissent. The body count climbs.

Women and queers don’t fare well under either religion.

So while it is the right of Muslims and Christians to gather and push whatever agenda they wish, it is good that neither faith runs the country.

Thank Darwin for separation of church and state.