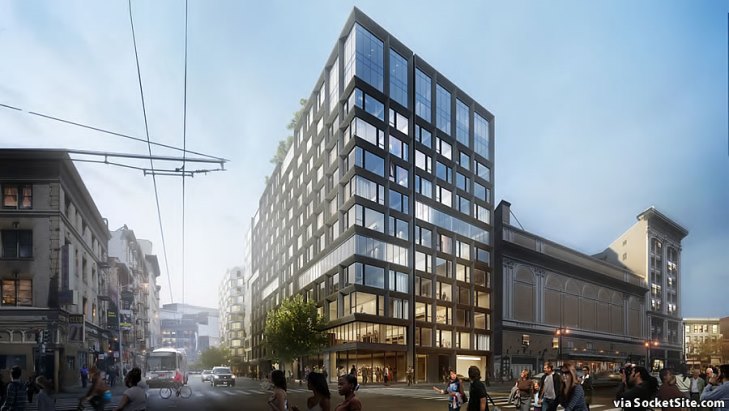 On November 17, the San Francisco Planning Commission reviews 950-974 Market Street, which includes 242 condominium units and a 232 room tourist hotel. While some might expect strong opposition to a new boutique hotel and market-rate condos on the Tenderloin’s border, local residents and community groups strongly support this development.

Why the support? Because after fifteen months of hard-fought negotiations, the Central City SRO Collaborative (CCSROC) and Tenderloin Neighborhood Development Corporation (TNDC) secured a Community Benefits Agreement (CBA) that guarantees meaningful opportunities for local tenants to share in the advantages of this project. Most importantly, the agreement with Joy Ou and her Group I development team brings historic gains for Tenderloin residents in two key areas: living-wage jobs and step-up housing.

A Pipeline to Living Wage Jobs

Until recently, few new businesses opened in the Tenderloin and opportunities for living-wage jobs in the community were rare. Group I’s hotel is actually the first non-residential development built in any portion of the Tenderloin since three luxury hotels were built on the northeast border in the early 1980’s.

The struggle against those luxury hotels reestablished the Tenderloin as a residential neighborhood. And as described in The Tenderloin: Sex, Crime and Resistance in the Heart of San Francisco, Tenderloin residents secured the first jobs-housing development mitigation agreement in United States history.

But while the Tenderloin ultimately ended up with four nonprofit SRO hotels out of that deal (the Dalt, Hamlin, Ritz and William Penn), the luxury hotels were only required to make a “good faith” effort to hire Tenderloin residents. No training funds were included in the deal, and the few jobs that eventually went to Tenderloin residents were in laundry and backroom positions.

Fortunately, Joy Ou was the perfect developer to negotiate with on this. That’s because she is committed to helping the Tenderloin and stated at the outset that she wanted to make local recruitment a priority. The challenge was that few models existed for how to adequately prepare local residents for these jobs.

The hospitality industry is very finicky in its hiring practices. In general, new upscale hotels either bring in workers from other hotels or hire people with substantial prior hospitality experience.

In this case, UNITE-HERE Local 2, the hotel workers union, is headquartered in the Tenderloin and many members live in the neighborhood. Local 2 wanted to create a model for hiring Tenderloin residents. They connected the coalition with a workforce development program that has unrivaled success in linking low-skilled tenants to union hospitality jobs.

Equality and Inclusion in Hospitality, Inc. (EIHI), offers an extensive skill building program led by hospitality experts. Given their reputation and connections throughout the hospitality world, they have managed to place tenants of low-income neighborhoods into hotel jobs with good pay, great benefits and chances for promotion.

The coalition worked extensively with EIHI to develop an outreach and training pipeline to guarantee local residents a shot at union hotel jobs. The developers understood the value of highly-trained, local staff, so they agreed to fund the effort the coalition designed. Group I’s investment of $300,000 will ensure that tenants throughout the neighborhood learn of this unique training opportunity and that a cohort of local residents gets the training needed to secure employment in an upscale, union hotel.

Throughout the process the city’s Office of Economic and Workforce Development (OEWD) backed the coalition’s push for a real Tenderloin jobs plan. This support made a difference.

Just last week, Rosie Rhines, a tenant at the Mayfair Hotel, started the four-month hospitality training with EIHI. Already, she said, “it has offered me insight into the interworking’s of upscale hotels that I never could have got on my own.” With Group I’s investment in workforce development, many more tenants can join Rhines on the road to life-changing jobs at neighborhood hotels.

How did the Tenderloin achieve this historic success on jobs? For the same  reason that propelled its landmark housing victory in the luxury hotel fight in the early 1980’s: neighborhood residents organized and fought for the outcome.

From day one, the coalition negotiating this agreement was majority Tenderloin tenants. Many took key leadership roles in drafting and negotiating the final agreement. Tenant Curtis Bradford, explained it as “a really unique instance in which there has been genuine tenant involvement in the negotiation from the beginning, which is really reflected in the final agreements.” Residents understood that too many CBAs include housing and jobs programs that serve middle-income and more highly skilled workers. By focusing attention on low-income workers they won a final agreement that responded to this group’s needs.

In addition to its historic win on jobs, the coalition also made a unique deal on housing: it traded the below market on-site condos set for 950 Market (pegged to those earning 90% adjusted median income) in exchange for off-site new, non-profit owned units that will provide step-up apartments for at least 34 current tenants in supportive housing.

City law required Group I to provide 31 units of below market-rate ownership housing, which are projected to sell at about $300,000 per unit. Since few Tenderloin residents would qualify for such housing, the coalition asked Joy Ou and Group I to consider an alternative affordable housing plan.

As with their commitment to hiring Tenderloin residents, Ou and Group I were supportive of an off-site inclusionary plan. After Jeff Buckley of Mayor Lee’s office told the coalition that a long entitled but unbuilt site at 180 Jones might be available for purchase, Joy Ou got to work. The first deal she worked out with the seller was rejected by the city as too costly. But she persisted.

Working with the coalition, mayor’s office and D6 Supervisor Jane Kim, Ou worked out a deal whereby a site entitled for 37 larger units would be re-entitled within the same building envelope for 68, 300 square foot units. 34 of these will go to longtime residents of city-funded supportive housing SROs at rents around 40% area median ($700-800 per mt.).

The genius of the plan is three fold. First, 68 units will be built on a site entitled since 2007 for a size and unit count that made market rate construction uneconomical. Second, longtime SRO tenants, many of whom are working, will finally be able to transition into apartments. Third, when these tenants step up to apartments, they will create 34 supportive housing vacancies for homeless people.

Topping off the deal: 180 Jones will be nonprofit built and owned. This adds more nonprofit units to a neighborhood whose high percentage of them (over 33%) has helped it avoid gentrification.

If city funded the leasing of 34 SRO units, the cost would run from $400,000-$500,000 per year. By creating these 34 vacancies through transitioning longtime residents to step up housing, the city saves $4-5 million in the first decade alone.

The benefits both for tenants and the City budget were clear as day to the SRO residents working on this agreement. Gail Seagraves, an Elk Hotel tenant and member of the coalition, says “having my own bathroom and kitchen would restore privacy and allow me to feel like a real, normal human being again. Plus, if you live in supportive housing and no longer need the services, it’s only right to make room for those who need it more than you.”

Three factors, all of which are replicable, made the 950 Market CBA an historic success.

First, we had a socially conscious developer in Joy Ou and Group I. Ou could have proceeded with on-site below market ownership units but preferred a project supported by neighborhood residents. Second, we had Jane Kim, the supervisor on the Board most adept at making affordable housing deals with private developers. Third, we had a great group of committed residents.

Absent any of these factors this historic victory would not have happened. But the outcome is clearly replicable by other developers, supervisors and groups of residents, and hopefully 950-974 Market provides a new model for other neighborhoods.

The goal of a Community Benefits Agreement (CBA) is not merely to guarantee benefits to local residents, but also to mitigate any possible harms that could come from the project. In a small neighborhood like the Tenderloin, a 500-unit development can have far-reaching impacts. With this in mind, the 950 Market CBA includes many approaches to addressing these potential consequences.

Aware of the affect that this project could have on local retail rents, the coalition negotiated $73,000 of rental assistance for local businesses near the development. With the health of nearby tenants in mind, we secured $100,000 for relocation costs and air filters for tenants living near the project, plus we convinced the developers to push the construction start-time back to 9am.

Also, horrified by the many instances of police and security guards responding to mental health crises with fatal force, the coalition persuaded the developer to provide mandatory de-escalation training for all frontline hotel staff. Reflecting on these various agreements, TNDC tenant Curtis Bradford said, “I feel really satisfied that we have worked diligently and conscientiously for over a year and now, our work has paid off with a strong benefits agreement that will ensure best possible outcomes for the community.”

This process highlighted what is possible when tenants have a chance to determine the future of their own neighborhoods. The Tenderloin, given up as a viable neighborhood in the 1970’s, has moved forward again and again with its residents continuing to prove the skeptics wrong.

This CBA is the latest step forward in the Tenderloin’s proud history.

(Editor’s Note: After the original version of this article appeared, the Planning Dept. found that it had failed to properly calendar this project. The date of the hearing in the first sentence was changed accordingly)

Randy Shaw is Editor of Beyond Chron. Rio Scharf is an organizer with the CCSROC.